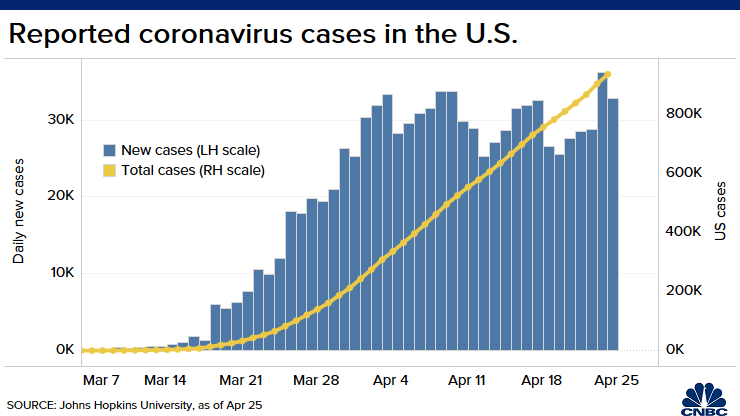 This is CNBC’s live blog covering all the latest news on the coronavirus outbreak. All times below are in Eastern time. This blog will be updated throughout the day as the news breaks.

The data above was compiled by Johns Hopkins University.

The future of Health and Human Services Secretary Alex Azar is unclear after a report that members of the Trump administration were considering firing him.

The Wall Street Journal reported on Saturday that officials were considering removing Azar, citing six sources familiar with the discussions. White House spokesman Judd Deere denied that any move was imminent, saying “any speculation about personnel is irresponsible and a distraction from our whole-of-government response to Covid-19.”

Trump defended Azar from criticism last month, saying on Twitter that Azar had “the complete confidence” of himself and Vice President Mike Pence. —Jesse  Pound

9:54 am: Economic damage is hitting the lowest level of wage earners hardest

Lower-income groups, who depend on the service industry for jobs, are taking the biggest impact from the shutdown of an economy that is driven by services like hotels, bars and restaurants. They work in the hard-hit retail sector and are dependent on others being able to shop and dine and travel, activities which all have been sharply curtailed during the current shutdown.

While government programs have been focused on keeping people afloat who have been displaced by the efforts to curtail the coronavirus spread, the pain is likely to be long lasting.

“The largest body blows are to the travel industry, the retail industry, parts of the health care industry that are on the front lines battling the virus. Those are generally low-paying jobs, so the folks in the bottom part of the income wealth distribution are going to get creamed by this,” said Mark Zandi, chief economist at Moody’s Analytics. “There’s no doubt about it.” —Jeff Cox

9:40 am: Social distancing measures will continue ‘through the summer,’ Birx says

White House health advisor Dr. Deborah Birx told NBC News’ Chuck Todd on “Meet the Press” that Americans will need to continue using social distancing measures even if the pandemic weakens by the end of May.

“Social distancing will be with us through the summer to really ensure that we protect one another as we move through these phases,” Birx said.

Birx’s comments came after Vice President Mike Pence told Fox News on Friday that “by Memorial Day weekend we will largely have this coronavirus epidemic behind us.” Birx said that Pence’s statement was based on models the White House task force has looked at that use data from Detroit and Louisiana. — Jesse Pound

9:32 am: Pelosi says cash-strapped local governments will get funding in next relief bill

House Speaker Nancy Pelosi said on Sunday that the next coronavirus relief package will include the state and local funding in high demand across the country.

Asked if House Democrats made a tactical error in backing the latest aid package, which didn’t include state and local funding, Pelosi told CNN’s Jake Tapper to “just calm down.”

“We will have state and local and we will have it in a significant way,” Pelosi said.

9:03 am: Reported cases and deaths in the US

Is China Fighting A Second Wave Of Coronavirus? | General News