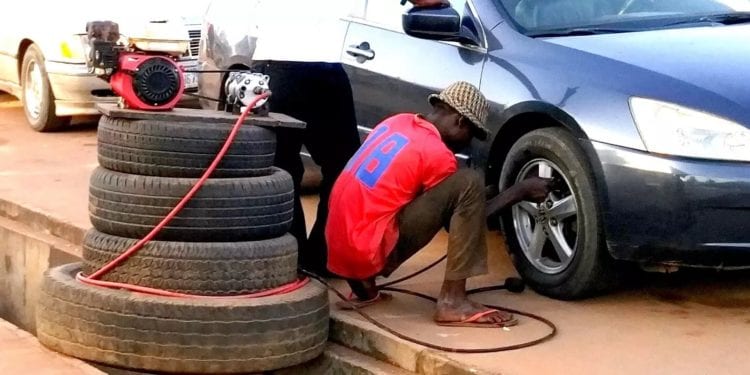 Vulcanizers in Ghana have hinted they will be increasing their service charges soon.

The Association gave the hint during its first meeting of the year.

The meeting was to engage vulcanizers from various places in Accra and some regions.

The decision by the Association to increase its charges, according to members, was as a result of an increase in the price of equipment and the high maintenance cost of the machines.

The Association revealed that the vulcanizers have over the years charged as low as GH¢1 for checking of pressure and pumping of tyres and GH¢5 for other services.

According to them, the low charges is having a negative effect on their daily income, bringing economic hardship to its members.

They added that the increase in their charges is a step in the right direction as it will better the lives of the vulcanizer and enable them offer quality service to Ghanaians.

The meeting also sought to educate the vulcanizers on tyre safety, significance of gauge calibration and importance of vehicle and road safety measures.

Addressing the participants, General Secretary of the Association and the Chief Executive Officer (CEO) of Barshok 10 Tyres Safety Services Basiru Karimu stated that the time has come for vulcanizers in Ghana to come under one umbrella to help reduce road accidents which are as a result of negligence.

He said the Association will engage government to deliberate and regularize the work of vulcanizers and put in place structures to better their living standards.

Mr. Basiru encouraged his fellow vulcanizers to invest in their profession and make the job more attractive.

Mr. Basiru further revealed that the Association has established a vulcanizing training Institute to train its members to have theoritical knowledge on the job, adding that the training institution will as well train other individuals who are interested in the vulcanizing profession.

The training institute, he said, has been registered under NVTI and it will be awarding certificates to participating students.

On his part, the representative from the National Roads Safety Authority (NRSA), Kwame Koduah, revealed that there is a new law that will look for institutional discipline and institutional compliance to the matters of road safety, adding that there is draft regulatory which will soon be taken to Parliament and vulcanizers are key partners who have been pencilled down.

He said the Authority is looking at how it can register, train and grant accredited certificates to vulcanizers to give assurance to drivers who seek their service.

He said the Authority has had previous discussion with the Association and therefore sought their participation to bring out ideas that prevent road accidents.

Ghana Will be Producing Its Vaccines Soon- Nana Addo assures