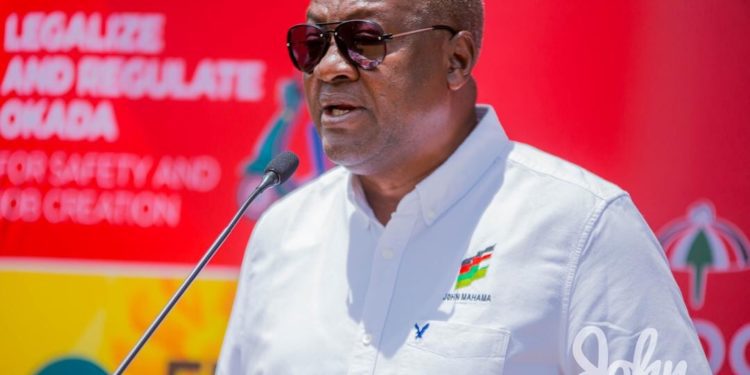 37
SHARES
205
VIEWS
Share on FacebookShare on TwitterShare on WhatsApp

Former President John Dramani Mahama has said that even though the National Democratic Congress (NDC) is not happy with the conduct of the 2020 elections, it still maintained a level head because the peace of Ghana is more important than anyone in the country.

He said there were many countries, where disputed elections led to civil wars, but for the grace of God, Ghana remains peaceful after every election since 1992 because the country cherishes peace.

Former President Mahama said this at the palace of Wa Naa Fuseini Seidu Pelpuo IV, the Overlord of the Wala Traditional Area, during his visit to the Upper West Region as part of his nationwide ‘thank you’ tour.

He thanked both traditional and religious leaders in the country for their contribution to peace in the country, adding that anytime the country is heading into an election, they counsel them to maintain the peace.

He said this has yielded results and that it was his prayer that Ghana would remain peaceful.

Furthermore, he said the PNDC led the creation of the Upper West Region and that both the PNDC and the NDC had since been principally responsible for most of the infrastructure in the region.

“So I’m not surprised that in the last elections if you take all the five regions of the north, the Upper West Region had the highest percentage of votes for the NDC in the Presidential elections with 67 percent.”

“We won the Presidential elections in all the 11 constituencies in the region and increased the number of our parliamentary seats from six to eight seats”, he said.

According to the former President, “but for the arm twisting by the military” in some constituencies against the NDC, they would have had a clear majority in Parliament.

On the recent floods that destroyed some major roads and cut off six districts and several communities in the Upper West Region, Mahama called on government to deploy the 48 Engineer Regiment of the military to allow free flow of vehicular traffic.

On the deplorable nature of the Sawla-Wa road, the former President expressed disappointment in the failure of government to maintain the road, adding that when the NDC was in government every year they used to maintain the bad road.

“If we don’t do anything about it, that road will completely be destroyed, and we would have to spend money to construct it again.”

“Whilst we think about building new hospitals, the capacities of existing ones must be fully utilized”, he said.

Wa Naa Pelpuo on his part commended Mahama for maintaining statesmanship after the December 2020 elections, noting that his peaceful nature contributed to the peace the country was enjoying.

The Most Reverend Richard Kuuia Baawobr, the Bishop of the Wa Catholic Diocese, thanked former President Mahama for his contribution to peace in Ghana and indicated their willingness to work with political parties that demonstrated the fear of God and the love for humanity.

The former President was accompanied by his running mate in the 2020 elections, Prof. Jane Naana Opoku Agyemang, Mr. Ofosu Ampofo, the National Chairman of the NDC, Mr. Peter Boamah Otokunor, NDC Deputy General Secretary, some Members of Parliament from the region, and regional and constituency executives among others.

Ghanaians in Germany protest against Akufo Addo to Fix The Country and stop his reckless borrowing and begging of money from Europe.