15 Movie Musicals That Will Brighten Your Dimming Spirit 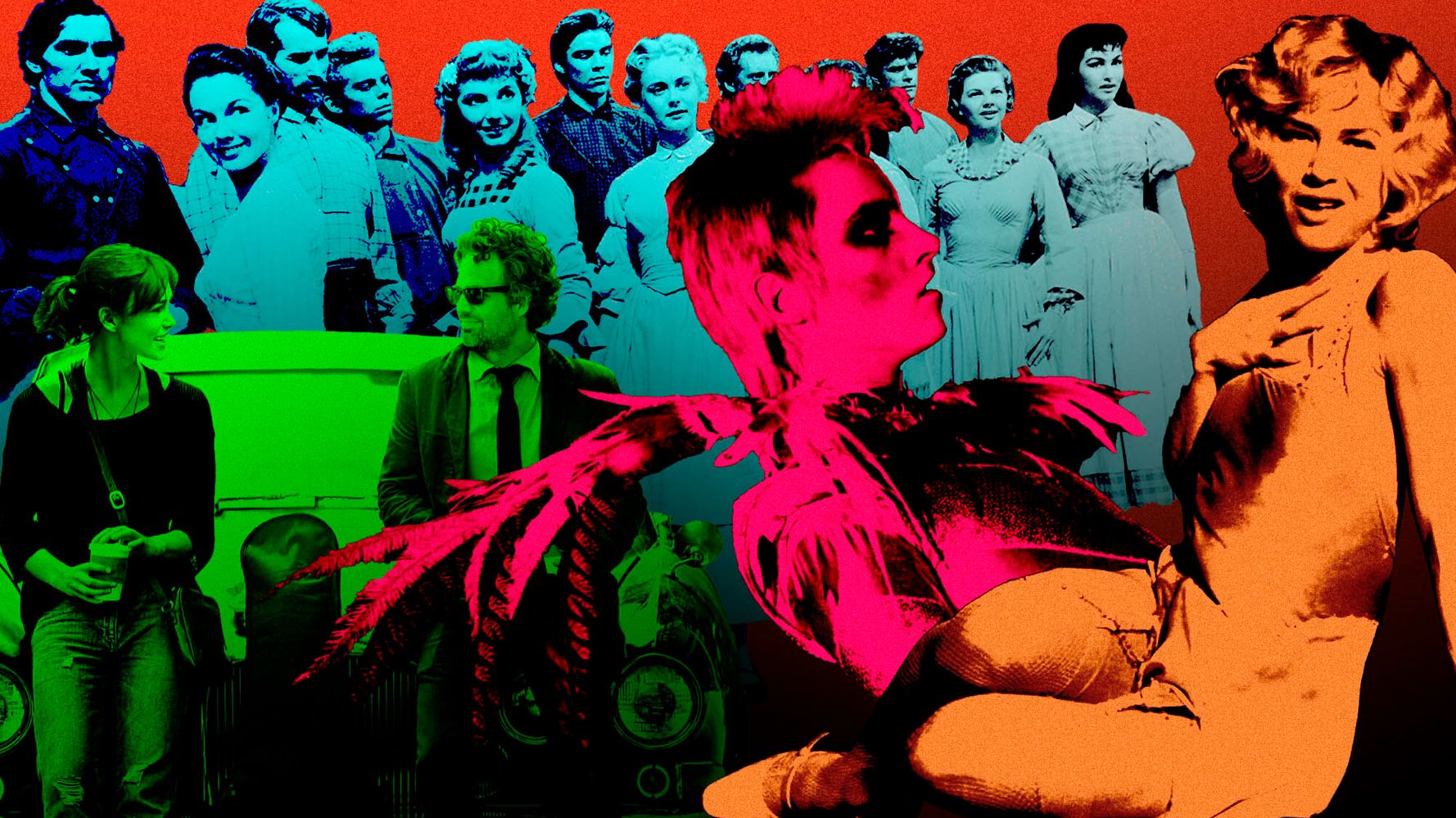 It’s been a long few weeks in coronavirus isolation.

“Words fail,” I say as I sip my fourth cup of coffee and look out the window, thinking, “It’s quiet uptown.” I grab another pair of leggings and a T-shirt I’ve had for far too many years to change into.

“Mother, what happened here?” I think as I watch my toddler take a crayon and drag it across my living room wall. “When life gives you eggs, make an omelet,” I concede. At the end of the day, I head to bed, restless. “Younger than springtime, are you,” I tell myself in the mirror as I wash my dry, blemish-filled face. “It’s the bitch of living.”

Thank God for musicals. Show tunes have helped me through these dark days, which might last a little longer than some of us initially thought. So, since we can’t physically head to Broadway, why not stream some magic through our living room screens?

In this list, HuffPost culture reporters share their picks for movie musicals that will have you smiling, singing and perhaps dancing through the pandemic, until we attempt to go “back to before.”

“Meet Me In St. Louis” (1944)
Two words: Judy. Garland. If that alone isn’t enough to sway you, “Meet Me in St. Louis,” set in St. Louis right before the 1904 World’s Fair, is full of beautiful period costumes, and enduring songs like “The Trolley Song” and “Have Yourself a Merry Little Christmas.” But, again: Judy Freaking Garland.
― Emma Gray

Available to watch (with commercial breaks) on the TVTime smartTV app, or rent on YouTube, Google Play, iTunes, Vudu and Amazon Prime.

Judy Garland will, of course, always be associated with “The Wizard of Oz.” One of the less-heralded gems in her cinematic oeuvre, however, is 1946′s “The Harvey Girls.” This delightfully campy Western fantasia gives us a showstopper in the exuberant “On the Atchison, Topeka and the Santa Fe,” which won an Oscar for Best Song. There’s also a 20-year-old Angela Lansbury as a “dancehall girl” from a local brothel, and even an Emerald City reunion of sorts between Garland and Ray Bolger, who played the Scarecrow in “Oz.”
― Curtis M. Wong

No movie can brighten my mood and lift my spirits when I’m feeling down in mere seconds the way that “Singin’ in the Rain” does. This movie has everything: that famous MGM technicolor gloss, amazing set pieces, Gene Kelly’s effortlessly beautiful dancing, and Debbie Reynolds in her first big role in a major musical. Every single song in this movie — and I mean EVERY single song — is a banger. From “Good Morning” to “Moses Supposes” to the titular song, every time a new number starts the attention to detail and the art of pure spectacle and scale is unmatched. This movie is funny and sweet and sad in all the right places and, even at almost 70 years old, it still holds up.
― Zeba Blay

“Seven Brides for Seven Brothers” (1954)
I need to preface this recommendation by saying that it is … a problematic fave, to say the least. The plot of “Seven Brides” is rife with misogyny, yet if you saw it as a kid, like I did, you are probably still enraptured by it. It’s about seven “scroungy backwoodsmen” out West and the women they fall in love with. The songs are beautiful and catchy, and it contains one of the most exquisite extended dance scenes I’ve ever seen.
― Emma Gray

Jacques Demy’s gorgeous French ballad was inspired by Hollywood’s Technicolor musicals, painting a vivid but bittersweet portrait of an ill-fated romance. The 1964 classic launched Catherine Deneuve’s career, inspired “La La Land” and remains one of the most handsomely designed productions ever committed to film. If you need a gentle cry, this is your jam.
― Matthew Jacobs

Available to watch on Criterion Channel, or rent on YouTube, Google Play, iTunes and Amazon Prime.

If Julie Andrews hadn’t already been note-perfect in “Mary Poppins” and “The Sound of Music,” perhaps more praise would be heaped on the woefully overlooked “Victor/Victoria.” Directed by Andrews’ husband Blake Edwards, the movie is an entertaining, genre-defying farce that, for its time, was also forward-thinking when it came to queer characters and themes. Andrews’ thrilling performance of “Le Jazz Hot” ranks alongside “My Favorite Things” (from “The Sound of Music”) as a sparkling musical achievement in cinema.
― Curtis M. Wong

This made-for-TV movie, directed and choreographed by Debbie Allen, was adapted from Eleanor H. Porter’s book “Pollyanna,” and starred Keshia Knight-Pulliam and Phylicia Rashad. The film follows orphan Polly Whittier who visits her well-to-do aunt in Harrington, Alabama, in the 1950s. Polly brings the small, segregated town together with her sunny disposition and, well, it’s also a bit of a tear-jerker at the very end. We played the VHS tape ad nauseam in my home in the ’90s, and I still know the words to all nine of the 100-minute movie’s musical numbers. It’s streaming on YouTube, but Disney Plus really needs to get it together and add it to the service.
― Erin E. Evans

“The Five Heartbeats” is, quite simply, a classic. The 10-song movie musical follows a Motown-inspired R&B group over three decades as the group members — portrayed by Robert Townsend, Michael Wright, Harry Lennix, Leon and Tico Wells — make hit records, battle alcohol and substance abuse, and face turbulent moments in their relationships. Townsend, who starred and directed the film, said it was a “rollercoaster ride” to make, taking more than three years and 10,000 actor auditions before it was finally released in theaters. But it was all worth it, of course. I’ve watched this movie more than a dozen times and seeing Eddie King Jr. drunkenly sing “Nights Like This” never gets old.
― Erin E. Evans

Although the 1962 film is a classic, I tend to go for the Bette Midler-lead version of “Gypsy,” as it reminds me of quality time spent with my mom, who sparked my love of musical theater. It tells the story of Louise (Elisabeth Moss/Cynthia Gibb), a girl who’s mostly ignored by her domineering stage mother Rose (Midler) as she focuses her energy on making younger sister June (Lacey Chabert/Jennifer Rae Beck) a vaudeville star. But when June gets sick of show business, Mama Rose is left with Louise, who eventually proves her worth in the burlesque world under the pseudonym Gypsy Rose Lee. If there’s anyone who can belt out a hit while commanding the screen, it’s Midler, whose rendition of the song “Rose’s Turn” is one to remember.
― Leigh Blickley

Available to watch on Vudu or with an Amazon Prime subscription, and for rent on YouTube, Google Play and iTunes.

Less traditional than most musicals on this list, Todd Haynes’ subversive 1998 glam-rock fantasia borrowed from the lives of David Bowie, Iggy Pop, Lou Reed and Oscar Wilde to create a carnal circus that celebrates and critiques pop mythology. The costume design alone, with its sequined glint and colorful quirk, is electrifying, and the soundtrack pays homage to underground ’70s music by way of Thom Yorke, Sonic Youth and The Stooges. Plus, the cast is a who’s who of future movie-star royalty, from Ewan McGregor and Christian Bale to Toni Collette and Jonathan Rhys Meyers.
― Matthew Jacobs

“Carmen: A Hip-Hopera” is arguably the best musical that doesn’t take itself too seriously to watch at a time like this. Directed by Robert Townsend, it marries Georges Bizet’s 1875 “Carmen” and the world of hip-hop to deliver a star-studded yet kitschy romance. Sgt. Derek Hill (Mekhi Phifer) is seduced by a young, aspiring actress, Carmen (Beyoncé), who convinces him to move to Los Angeles after he ruins his engagement, gets fired from his job and gets arrested. The musical is filled with bops to sing along to, but the highlight is Bey’s iconic sing-rapping in the “If Looks Could Kill You’d Be Dead” number.
― Taryn Finley

Neil Patrick Harris was absolutely delightful in the 2014 Broadway incarnation of this musical, but John Cameron Mitchell will always be the definitive Hedwig. Songs like “The Origin of Love” and “Wicked Little Town” all tug at the heartstrings and could make this movie worthwhile viewing on their own. But by today’s standards, it’s also easy to forget how subversive the film was in featuring a gender-fluid heroine at its center.
― Curtis M. Wong

There’s no denying the talent in this film adaptation of “Chicago.” Renee Zellweger. Catherine Zeta-Jones. John C. Reilly. Queen Latifah. Taye Diggs. Richard Gere! When the movie hit theaters nearly 18 years ago it was a bonafide hit, earning $306.7 million worldwide and six Oscars, including Best Picture. The story about two death-row murderesses who develop a fierce rivalry is such a crowd pleaser and features some of the best musical numbers caught on film. Zellweger and Zeta-Jones stun in a cellblock tango very much worth the watch.
― Leigh Blickley

Available with Hulu and Amazon Prime subscriptions, or for rent on Google Play, YouTube, Vudu and iTunes.

So you’ve exhausted all the award-winning, critically hailed movie musicals and you’re left wondering: Shouldn’t these all star the premiere vocalist of our times, Hilary Duff? Well, let it be known that a little film called “Raise Your Voice” exists, and the story a small-town girl attending the performing arts school of her dreams is the perfect quarantine watch. The movie features the most emotionally complex turn of Duff’s early-aughts oeuvre ― “Cinderella Story” please take SEVERAL seats ― as she grapples with finding her (you guessed it) voice after the tragic death of her brother. It’s an ultimately uplifting tearjerker that hits almost all the right notes. Rita Wilson also stars as Duff’s mom, and John Corbett plays her eccentric music teacher, so literally what are you waiting for?
― Cole Delbyck

Available for rent on YouTube, Google Play, Vudu and iTunes and Amazon Prime.

Keira Knightley starring in a movie set in this century sans corset doesn’t happen very often. But one in which she sings and plays guitar, much to the delight of a scruffy Mark Ruffalo, makes “Begin Again” a must see. The John Carney-directed film didn’t make much of an impact when it was released in theaters back in 2013, but it’s a feel-good movie that’s not overly saccharine and features some genuinely well-written (and Oscar-nominated!) songs. The film captures the polarities of living New York City, a place that can make you feel all alone or at the center of the universe, as Knightley and Ruffalo’s characters set out to record an album in various public places around town. For the remaining Maroon 5 fans out there, Adam Levine also stars as Knightley’s pop star ex and is an unexpected bright spot in the film. After “Begin Again” was released, Carney disparaged Knightley’s performance, so watch it in her honor because in this household we do not tolerate SLANDER.
― Cole Delbyck

Available for rent on Vudu, iTunes and Google Play.

US coronavirus testing needs to go up by 350,000 per day, researchers say