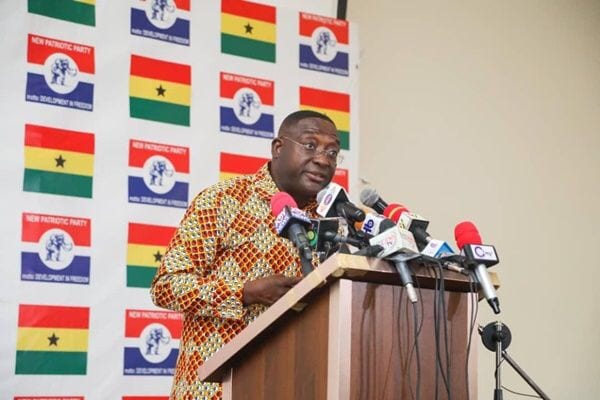 The New Patriotic Party (NPP’s) Director of Communications, Mr Yaw Buaben Asamoa, has suggested that Ghanaians retain ruling parties in power for long periods.
That, he explained, would enable the citizenry to appreciate the policies and programmes being implemented for their welfare.

For him, the practice where governments were changed every eight years was not helping the country to realise the benefits of the policies and programmes of the changed government, hence retaining the party in power was necessary to ensure that projects and policies started by the changed leader were fully realised.

Speaking at a press conference at the party’s head office in Accra last Tuesday, Mr Asamoa said many countries in Europe and Asia had seen massive developments because they practiced retention of governments and changing only leadership.

“For us in the NPP, we believe a four-year term cannot bring out the best in any particular leader. After eight years of strong, decisive leadership by President Nana Addo Dankwa Akufo-Addo, our constitution demands a change of leadership but we still believe policies may not have matured yet. So it is important to continue credible policies by changing the leader and retaining the party providing good governance under fresh leadership.

“Many sophisticated electoral democracies have multiple political parties and groupings but tend to maintain a particular one in authority for the benefits of policy consistency and continuity,” he said, citing the Liberal Democratic Party (LDP) of Japan and the Christian Democratic Union (CDU) of Germany.

For him, continuity of parties in power would help prevent situations whereby people demanded instant results and instead opted for a sustained policy and leadership approach to development.

He said the NPP as a party had the ideology, principles, respect for liberties and rights and leadership ethos to shepherd the country on a sustainable path forward than any other political party.

Touching on corruption, Mr Asamoa charged corruption fighting institutions to up their games, pointing out that corruption should not be treated with political lenses but as a national problem that needed nationalistic approach to fight it.

He said President Akufo-Addo had done well in fighting corruption by strengthening corruption fighting institutions, and therefore they had to work hard enough to justify the investment of government in them.

Turning the spotlight on the “Fixthecountry” campaign, he said the government was aware of the challenges people had been complaining about and was working assiduously to resolve them.

He, therefore, urged the initiators of the campaign to be decorous in their utterances.

ECG announces another 16-days of Dumsor in Accra

ECG announces another 16-days of Dumsor in Accra