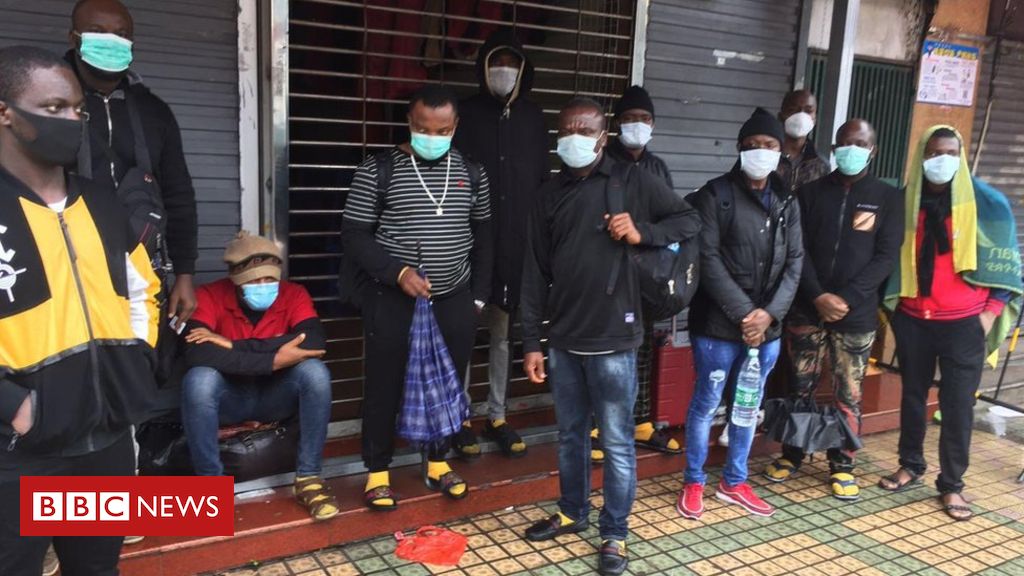 Ade* was given until midnight to vacate his apartment.

Five months earlier, the Nigerian student had moved to Guangzhou, southern China, to study computing at Guangdong university. He had just paid his university fees for the new semester when his landlord informed him that he needed to leave.

He scrambled to pack his belongings. The police were waiting for him and his roommates outside.

When he attempted to drop off his bags at a friend’s warehouse, he was prevented from entering. He spent several nights sleeping on the streets.

“Look how they are treating us, how they forced us out of our houses and forced us to self-quarantine,” he told the BBC from a hotel in the city.

“They told me that the [test] result is out and I am negative. Still they don’t want me to go out.”

African community leaders in Guangzhou believe the vast majority of the city’s African population have been forced into quarantine or are sleeping on the streets.

“Some are in hiding,” said one community leader over an encrypted social media app.

In early April, online rumours began to circulate that parts of the city where Africans live and trade were under lockdown after two Nigerians who had tested positive for the virus escaped. Chinese media reported that a Nigerian patient had attacked a Chinese nurse.

The local authority says it has tested every African national in the city for the coronavirus. It found that 111 of the more than 4,500 Africans in Guangzhou tested positive.

“They just came with their ambulance and medical team and took us. All they said was that it was Chinese law and an order from the government,” said Hao*, a businessman from Ivory Coast.

Guangzhou has become a hub for Africans in China.

Towards the end of the century’s first decade, hundreds of thousands were thought to live in the city. Many of them entering the country on short-term visas to buy goods from nearby factories and send them back to the continent.

By some estimates there were more than 200,000 dwelling in the city. Some settled for the long term. Many overstayed their visas.

In recent years, the numbers have dwindled. Businessmen have complained of unfair visa restrictions and unfair treatment. In 2018, small hotels in Xiao Bei Lu, a popular area for African traders, temporarily turned away Africans from several nations, they told the BBC.

“Most of the Africans living there are nice and friendly with the locals, and they are doing business as normal for the past years,” said one Guangzhou resident who did not want to be named.

“If there is a problem, it may be that some Africans are overstaying and doing some illegal things.

“The conflict over the virus test, I think it is something of a misunderstanding. It is not about racial discrimination. That’s not the style of the Guangzhou people,” he said.

“People are not hostile to Africans in their mind, unless some Africans are doing things against the local rules,” he added.

The Chinese government dismissed claims of racism, insisting China and Africa are friends, partners and brothers and that it has zero tolerance to racism.

But many of those the BBC spoke to say they have been singled out because of their race.

“Ninety-eight per cent of Africans are in quarantine,” said one community leader who did not want to be named.

Wuhan lockdown continues – for some

Africans across China say they are facing increased scrutiny. On the deserted campus of Wuhan University African faces outnumber Chinese.

“We are the ones that are left behind,” says Michael Addaney a Ghanaian graduate student studying in the Chinese city where coronavirus was first detected.

For more than two months he has waged a social media campaign demanding his government bring his countrymen and women home.

At the height of the outbreak, an estimated 5,000 African students were stranded in Wuhan and neighbouring cities, after most sub-Saharan nations failed to evacuate their citizens.

“We feel like sacrificial lambs for no reason. The plan was to keep the people safe by sacrificing us,” asked one student who did not want to be named.

“What was the point as our countries didn’t put measures in place to protect the people from the virus?”

When Wuhan officially ended its lockdown on 8 April, normality began to creep back into the city.

More than a week on, African students on campuses remain unable to leave the grounds of the university. They have no information of when their own lockdown will be lifted.

Back in Guangzhou, a student from Sierra Leone said she believed Africans were being singled out.

“All of this is happening because there has been a rise in foreign imported cases, [but] the majority are from Chinese nationals,” she said.

“Only a small percentage is made up of Africans.”

She received a letter from her university stating that all Africans needed to be tested. Despite being tested twice she remains in quarantine.

“With all this happening, the Chinese have exhibited racism and discrimination against black people here in Guangzhou.

“I know people from my church who are white and non-Africans who are not going through what we are going through – quarantine and multiple testing,” she said.

A Nigerian businessman under quarantine said that “it was the police that removed me from my apartment and put me on the streets”.

“I don’t have any problem with my landlord. He didn’t even know I had been evicted. My children slept on the streets for many days.”

On social media, hundreds of Africans in Guangzhou have organised groups supplying each other with regular updates. They send photos of numerous hotels and hospitals where businessmen, residents and students are being held across the city.

Some post test results showing that they are negative. Others post medical and hotel bills that they say they cannot afford to pay. Videos of Africans sleeping on the streets have gone viral.

The Guangdong government has publicised a hotline for “foreigners who experience discrimination”. But for those in quarantine, suspicions remain high. Videos continue to circulate online of Africans being moved between hotels by ambulance.

Xiao Bei Lu is known as “China’s little Africa” but social media videos show that its streets, at one time packed with African traders, are now deserted.

The names of the interviewees have been changed.