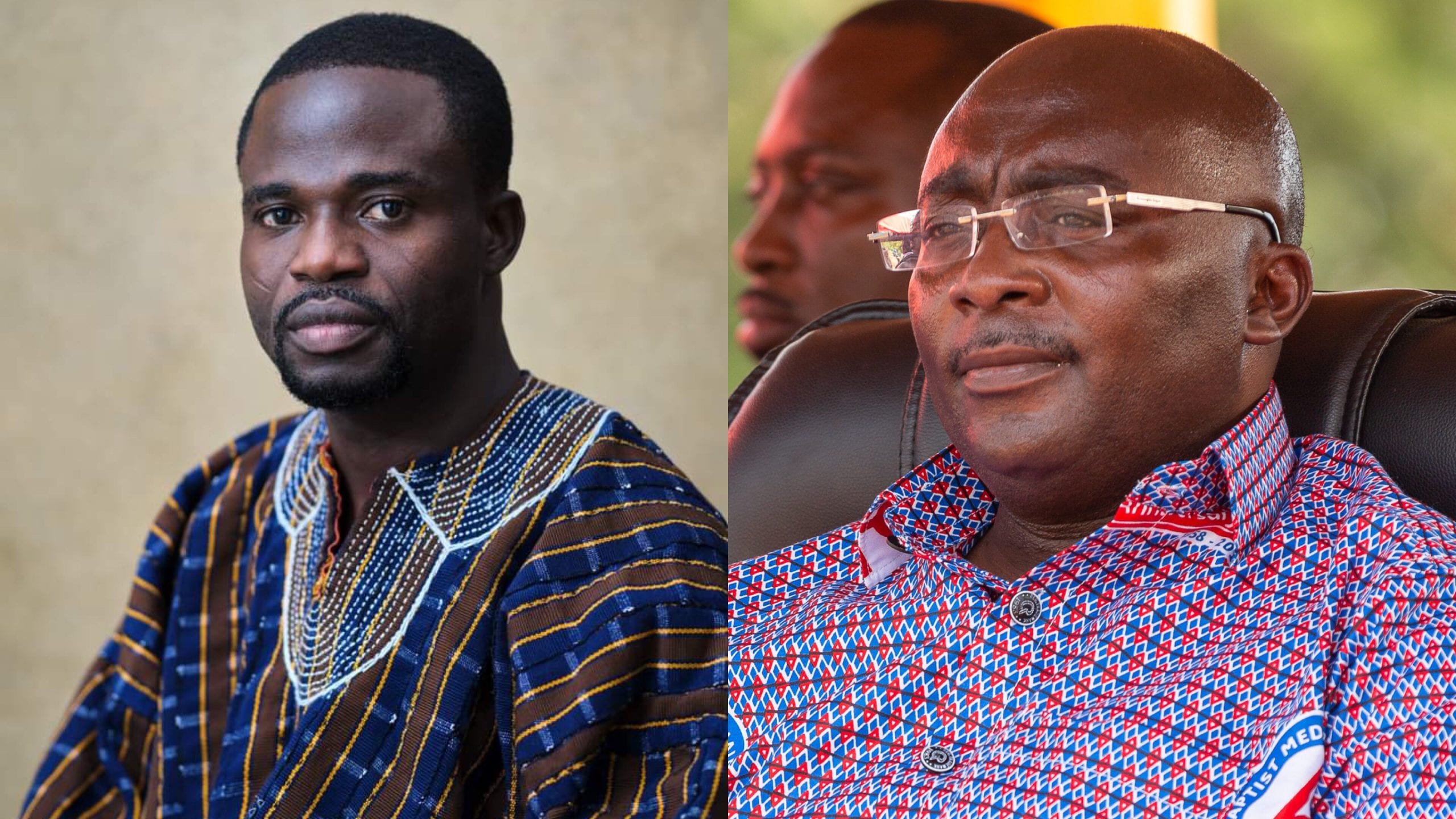 Investigative journalist Manasseh Azure Awuni has questioned if Dr Bawumia eventually becomes the leader of the NPP, will he be able to campaign on the records of President Akufo Addo?

In his latest Folder, Manasseh raises issues Of how President Akufo Addo campaigned With Kufuor’s Free Press agenda but only to become President and turn around to be vindictive and hostile to free speech.

Other issues raised by the freelance journalist is, if the NPP can break away from the notion that it’s an Akan party?

Will voting for Bawumia as its leader be on merit because he is qualified or just a favour to downplay the notion that Npp is an Akan Party?

Below is how his latest writing was captured.

If the most qualified candidate in the line of succession is an Akan, he or she should not be sacrificed on the altar of ethnic consideration. I’m from the north, but if you field a known thief or vindictive and intolerant candidate from the north, I wouldn’t be stupid to vote for that person just because he comes from my part of the country.

As a journalist and writer, I’m not too naive to know the role ethnicity plays in our politics. Neither am I too hypocritical to admit that the NPP is currently faced with a dilemma that is woven around ethnicity.

The context of the discussion, however, appears flawed. Or rather, it is valid context but the angle from which the discussion is taken is problematic. That angle diminishes Bawumia’s achievement in the party and presents him as a pitiable recipient of political favour.

So, the NPP should scope the discussion and debate appropriately if they want to weave Bawumia’s relevance around the fabric ethnicity. They should scope it this way: He is one of the greatest assets of our party today. He is partly responsible, in a significant way, for our victories in the past two elections.

He and his wife have worked like donkeys during campaigns and we have tangible results to show for their sweat in certain identifiable electoral quarters. He is part of the reason many of us have enjoyed or will enjoy the power and its trappings in the eight years. He has shaped national political discourse. His influence has made the economy the centre of discussion in our national politics in a way that has never been seen before.

He probably stands tallest among those who are seeking to lead the party. But he has a big problem! He’s not Akan. Our party has never been led by a non-Twi-speaking Akan since its founding. The NPP’s political opponents have said that even though Dr Bawumia is the most qualified person to lead the party, he will be “used and dumped” because he is not an Akan. Everybody is waiting with bated breath to see if the party will fall for the baited prophecy of their opponents.

So now what does the party do now? If we ignore him, how else can we convince non-Twi-speaking Akans and other ethnic groups that our party is ethnically inclusive? Of course, there is a legitimate charge against Dr Bawumia. The man whose legacy he will be relying on to lead the nation has disappointed many within and outside the party. For instance, today, Akufo-Addo still boasts about Kufuor’s repeal of the Criminal Libel Law when he has to talk about press freedom.

Can Bawumia boast about Akufo-Addo’s record on press freedom? So, Dr Bawumia must carry Akufo-Addo’s baggage. But he’ll be in good company, for the others seeking to lead the party are also part of the Akufo-Addo train. The next argument might then be that the rest were not as powerful in the Akufo-Addo regime as Dr Bawumia. They were ministers, but Dr Bawumia was the Vice-President. To those who really know about the politics of Ghana, the only job that might appear more frustrating than the position of Vice-President is the work of a horny pornography cameraman. There are many real vice-presidents who are more powerful than the ceremonial one.

President Atta Mills loved Vice-President John Mahama, but it did not stop Mr Mahama from being frustrated to the level that he wrote his resignation letter one afternoon. Some people also argue that giving Dr Bawumia a chance to lead the NPP is a perpetuation of Akufo-Addo’s rule. History, however, teaches us that things don’t always turn out this way. Vice-President Professor John Evans Atta Mills was handpicked by President Jerry John Rawlings to lead the NDC in the 2000 election. This was against stiff opposition in the party. It resulted in a split of the party. Some prominent people left the NDC to form their own party.

The NPP said Atta Mills would be a puppet of Rawlings. “Vote for Mills and get Rawlings free,” they campaigned. Professor Atta Mills was loyal and humble to a fault. Rawlings campaigned for Atta Mills as though he (Rawlings) was the candidate. When Atta Mills finally became president. He was his own man. He did not become Rawlings’ puppet, much the to the displeasure of Rawlings, who publicly attacked Mills. So Dr Bawumia should be assessed on his own merits. If he is fit to lead the party, he should be given the chance to compete.

The competition between him and contenders should be free and fair.But keen watchers of the political landscape can understand the Bawmia dilemma. The NPP’s dilemma about Bawumia can be likened to a story I heard about a particular kind of spider that hunts houseflies and would carry its catch around without ever eating it.”Why don’t you eat the houseflies after catching them?” its neighbours would ask. “Do you want me to eat a dirty and disgusting housefly?” the spider would ask.

“If you won’t eat it, why don’t you let it go?” the confused neighbours would ask again.”Do you want me to throw away meat?” the spider would respond. The NPP is faced with a supremely qualified non-Akan who wants to lead the party as its flag bearer. We, like the neighbours of the housefly, can only ask questions and wonder how the drama ends as the spider wanders with its catch. But whatever the case might be, the context of the discussion should be properly scoped.

You can reach the writer, Manasseh Azure Awuni, through azureachebe2@yahoo.com.