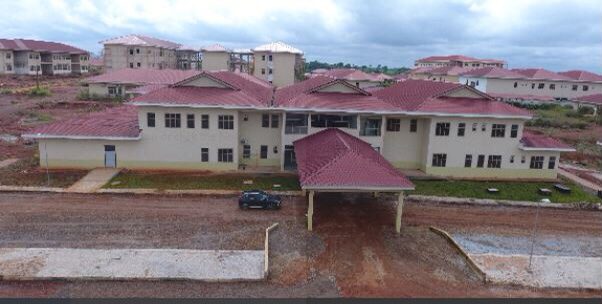 104
SHARES
578
VIEWS
Share on FacebookShare on TwitterShare on WhatsApp

An altercation occurred between the Minority members of the Health Committee of Parliament and soldiers on guard duties at the uncompleted 500-bed Military Hospital at Afari in the Ashanti Region last Monday during a familiarisation visit to the project site.

The soldiers said they were not under instructions to allow the MPs to inspect the project, but the Minority members, led by the Ranking Member on the Health Committee, Mr. Kwabena Mintah Akandoh, would have none of that.

Mr. Akandoh said they were not intruders but rather MPs who were on official duty, so it was wrong for the security men to prevent them from undertaking their lawful duties.

When the Daily Graphic asked Mr. Akandoh if the Minority MPs had sought permission from the military authorities before the visit, he answered in the negative, saying that nobody would have granted them the permission to inspect the projects.

He, however, said the MPs conducted the exercise because it had an oversight responsibility to inspect such projects.

Journalists accompanying the parliamentary team were also asked by the soldiers to desist from filming or taking pictures of the project, but again, Mr. Akanboh said that the order would not be obeyed because it was against the laws of the nation.

After about 25 minutes of back and forth, the soldiers refused them access to the buildings.

But before touring the project, the Mawerehene of Adansi, Nana Abu Takyi Korsah, at a meeting with the MPs made a passionate appeal to President Nana Addo Dankwa Akufo-Addo to commit the necessary resources to kickstart the operationalisation of the hospital.

He said the delayed completion of the 120-bed hospital for the past two years had compelled the people to access medical care in the adjourning district of Ashanti Bekwai, a distance of about 23 kilometres.

How on earth will one government initiate such a major hospital project meant to improve healthcare to the people in Fomena, the district capital, only for it to be neglected by another government?” he asked.

The Fomena District Hospital, which is said to be 80 percent complete, is one of the seven hospitals being financed through a $175 million loan from the UK Export Fund and is being executed by NMS Infrastructure Limited.

The 80 percent completed projects were initiated by former President John Dramani Mahama in 2015 and they were due to be completed in 2017. Except for the one at Dodowa, others are currently at various stages of completion.

During the visit, it was observed that most parts of the Fomena District Hospital’s compound were overgrown with weeds, which are gradually also taking over most of the completed bungalows for health personnel.

After the tour of the facility, Mr. Akandoh described the lack of commitment by the government to complete the project as causing financial loss to the state.