Akufo Addo is the Worst President in the History of Ghana, I don’t believe in Akufo-Addo; he is a liar; he’s a business collapser- Ajumako Chief 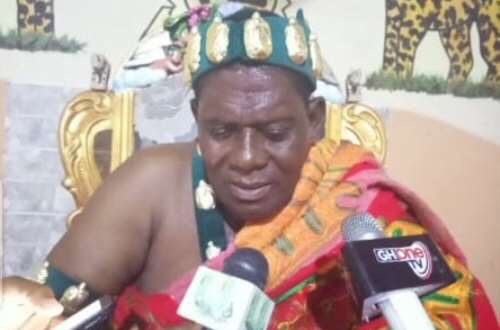 314
SHARES
1.7k
VIEWS
Share on FacebookShare on TwitterShare on WhatsApp

The Chief of Ajumako Eduyaw in the Ajumako Enyan Essiam District of the Central Region, Nana Obuedum has described President Nana Addo Dankwa Akufo-Addo as a liar.

He said the President is telling lies with his numerous promises he has not fulfilled.

According to him, he does not believe in the sitting president and will advise Ghanaians not to depend on his government.

As a Chief, I don’t depend and believe in Akufo-Addo promises because he doesn’t speak the truth.

The Ajumako Chief who alleges that government under Akufo-Addo has been the worst in the last 47 years also assert that the president has failed Ghanaians over the failure to fulfil many of the promises made prior to the 2016 and 2020 general elections.

The Chief insists that he is shocked Ghanaians decided to vote to retain President Akufo-Addo in the last elections.

“You don’t know what came over Ghanaians to vote for him [Akufo-Addo] in the 2020 general election. Nana Akuffo Addo since he came has collapsed numerous business including my two schools,” Nana Obuedum noted.