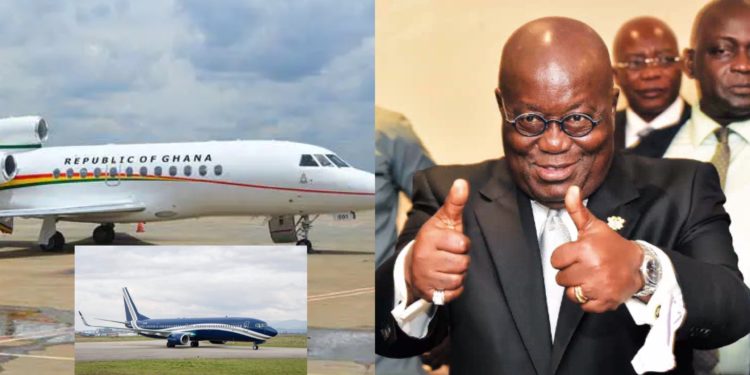 79
SHARES
441
VIEWS
Share on FacebookShare on TwitterShare on WhatsApp

The whole idea of Akufo Addo arrogantly ignoring calls of Ghanaians to explain why he is flying around in a rented luxury jet has finally been revealed.

It will be recalled that but for the expose of Hon. Okudzeto Ablakwa, the Government of Ghana led by Akufo Addo was secretly traveling around in an expensive luxury jet while Ghana’s own lie idle.

While questions about the cost of President Nana Addo Dankwa Akufo-Addo’s foreign travels remain unanswered, the government has announced plans to purchase a new presidential jet for the president’s foreign travels.

This was disclosed by the Director of Communications at the Presidency, Eugene Arhin at the Jubilee House Monday, September 27 during the Presidency’s weekly press briefing.

According to Mr Arhin, the government of Ghana through the Minister of Defence, Dominic Nitiwul has already started the processes for the procurement of the new jet.

“You would recollect that when the government of President Kufuor left office in 2008, it had procured two jets – the current Falcon and a bigger one but for one reason or the other, the bigger jet was cancelled, and we were left with just one. That has happened, but you will recall that the Defence Minister stated clearly that the government has decided to buy a bigger jet to save us from all these troubles.”

“I don’t want to go into the details, but I am sure that when the Minister gets the opportunity, he will give further information on what the government is doing in that respect, but I am sure of the fact that government is already in the process of getting a bigger jet for use”, he told pressmen Monday.

This revelation comes at a time when the Presidency has dismissed claims made by Member of Parliament (MP) for North Tongu, Samuel Okudzeto Ablakwa, that Akufo-Addo uses luxury chartered jets while on foreign travels which according to him has cost Ghana GH¢10 million so far.

The presidency has however failed to disclose the cost of the president’s travel.

When the North Tongu MP filed an urgent question on the floor of Parliament to have the Minister of Finance respond to the cost of the President’s foreign travels the first time, the Minister asked for more time to get the figures but he later appeared before the House and said the issue was a matter of National Security.

The MP says he will not relent in his efforts to demand accountability from the government on the matter.