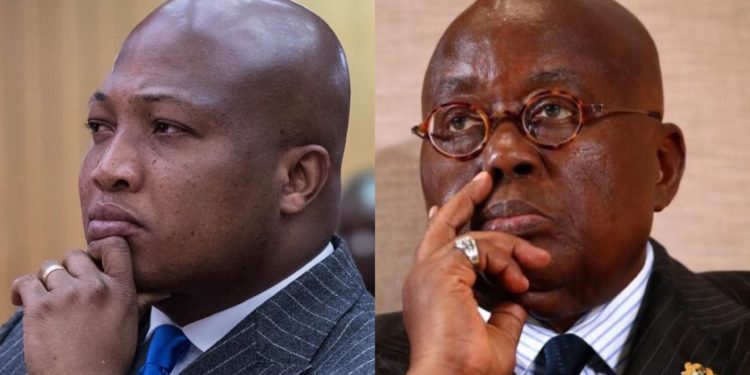 48
SHARES
265
VIEWS
Share on FacebookShare on TwitterShare on WhatsApp

The MP for North Tongu; Samuel Okudzeto Ablakwa has vowed that he is not going to give up in pushing for full disclosure on how Akufo Addo is using Ghana’s meager resources on renting luxury jet.

The member of Parliament was the first to have broken the story of how President Akufo Addo has abandoned the Presidential Jet for Ghana to be renting a luxury one from a Luxembourg Private Jet company.

Even though Honorable Ablakwa succeeded in bringing Finance minister who double as the cousin of Akufo Addo, Ken Ofori Atta to Parliament, he was evasive with his answers.

It’s however the third time Mr Ablakwa is revealing the President is flying around on the 17,000 euros an hour luxury jet.

Akufo Addo recently attended the General Assembly Meeting of the UN and it has been revealed yet again that he flew to America on this same jet many Ghanaians have expressed their displeasure about.

Funny enough, Ghana’s Presidential Jet has been handed over to Liberian President Oppong Weah while Akufo Addo burdens the Ghanaian taxpayer with his extravagant lifestyle.

Honorable Samuel Okudzeto Ablakwa has thus written a fresh letter to the President via his social media and has been captured below.

May I duly welcome you home after landing in Accra at 1:41am this dawn aboard your now famous LX-DIO Boeing 737-900ER BBJ3 charter jet.

As all Ghanaians are, I am also absolutely grateful to the Almighty for journey mercies.

I note that it’s been quite a long return trip as you were compelled to detour for refuelling at the Amílcar Cabral International Airport in Cape Verde at about 20:43GMT on Sunday. Around that time, many Arsenal supporters here in Osagyefo’s land were still celebrating their victory over your team, Tottenham Hotspur. I know you will bear with the Gunners for their lack of empathy and “disrespect” seeing that victory in recent times has been as hard as getting your government to render full account on your rather profligate travels abroad.

As you may have found out when you landed at the Jubilee Pavilion, your counterpart, Liberian President George Weah has returned in one piece our Presidential Jet – the Dassault Falcon 900 EXE which you permitted him to use in your absence.

Reports say the 1995 African, European, and World Football Player of the Year is most grateful for your Pan African generosity, particularly as a President like Hage Gottfried Geingob of Namibia insists on religiously using his 30 year old Falcon and therefore leaving no room for other less fortunate African Presidents to also have a feel.

Mr. President, many Ghanaians especially NPP supporters and your appointees would have loved to really welcome you back home at the airport in grand style following your much touted diplomatic exploits in the US, however, you seem to prefer a Nicodemus arrival.

It is well established that one of the cardinal advantages of leasing luxury aircrafts is that you get to determine your own flight schedule unlike mere mortals who fly commercial. One wonders if Ghanaians are getting value for money if we cannot at least be given the opportunity to welcome our President in broad daylight. This must be very strange for a government that organizes elaborate welcome parties to receive COVID-19 vaccines at the airport and yet we are not afforded the privilege to welcome the great negotiator who made it possible in the first place for Ghana to receive these vaccines. Even though haters and Jeremiahs as you like to describe them will claim you arrived at that unholy hour to avoid prying eyes as you take your royal swagger disembarking steps, I wouldn’t be surprised if you retort that the Jeremiahs should be contemptuously ignored.

Your Excellency, may I remind you that during your first inaugural address on 7th January, 2017; you had this to say: “We should move on to deepen our democracy. It is time to make sure that we have a true separation of powers between the various arms of government.

Our Parliament, the legislative arm of government, must grow into its proper role as an effective machinery for accountability and oversight of the Executive, and not be its junior partner.

The Ghanaian Parliament, the Ghanaian Member of Parliament, must stand out as institutions that
represent all that we hold dear and citizens can take pride in.”

Your own poignant words about what you expect from a proper Parliament as an effective machinery for accountability and oversight of the Executive should make you commend the NDC caucus in Parliament for pursuing full accountability in your controversial foreign travels saga; particularly when you choose without justification to abandon our Presidential Jet which is in pristine condition.

Your maiden presidential speech as you took your sacred oath of office made clear that you don’t expect Parliament to be a junior partner of the Executive, and yet on this issue you have been in cahoots with your Ministers to be evasive and elusive to Parliament in ways that gravely undermine the assurances you gave Ghanaians about the kind of Parliament you wish for in your era.

Your government sends its attack dogs to hound any MP who speaks to this matter even though you admonished Ghanaian MPs to “stand out.”

All that notwithstanding, you should realize by now that these fascist schemes do not deter us.

Fortified with the knowledge and conviction that we are on the right track in the supreme interest of Ghana and as vanguards of the public purse, we shall remain resolute and fearless as our constituents and our conscience expect of us. It matters not if you have made yet another unprincipled u-turn from your initial declaration.

As Commander-in-Chief of the Ghana Armed Forces whose Air Force’s Communications Squadron is responsible for the Presidential Jet, you owe Ghanaians direct explanation in the true spirit of transparency and accountability as to why you prefer to lease aircrafts at astonishing cost to the suffering Ghanaian taxpayer instead of flying the Falcon purchased by a government you were an integral part of at a fantastic cost US$37,150,000.00 in 2008. (See Parliamentary Hansard of 19th March, 2008).

Ghanaians deserve and demand to know from you why you prefer alien luxury aircrafts operated by foreign crews when our celebrated Air Force professionals with unquestionable loyalty trained at significant expense to the taxpayer guarantee better security for our presidents — an action creating considerable disquiet within the ranks of the Ghana Air Force.

Ghanaians want to know just how far you are willing to go with narcissistic personal comfort at their expense and exactly what you meant by protecting the public purse? They also want to know what it means to burden-share in this period of economic hardship and what aspect of the burden you are responsible for?

Many Ghanaians have been asking during your absence from Ghana if the already struggling taxpayer now has to take care of your ostentatious Arabian-king-style travels while additionally bearing the cost of other presidents using our Presidential Jet?

A good number of citizens are wondering if Ghana is not better off spending the millions being dissipated on your luxury charters on purchasing a new aircraft to meet your standards — a standard obviously way above the contemplation of all your predecessors from Presidents Kufuor through Mills to Mahama. (Strikingly, records available to us in Parliament reveal that you have already spent in excess of GHS100million on foreign travels alone)

Sir, your deafening silence on this matter which is essentially about your personal indiscretions has reached a crescendo which is no longer tenable. At the very least, be bold enough to publicly defend your actions if you are indeed proud of them.

Respectfully, opting for arrogant silence and yet choosing to obstinately defy public outrage by continuously renting these luxury monsters must be the height of disrespect any president in the world ever showed to the very people who elected him.

My colleagues and I would not rest until we secure full accountability for the Ghanaian people. As you warned in your inaugural address, we refuse to be a junior partner to the executive and I dare add that neither shall we be your lackeys.

Yours in the service of Ghana,