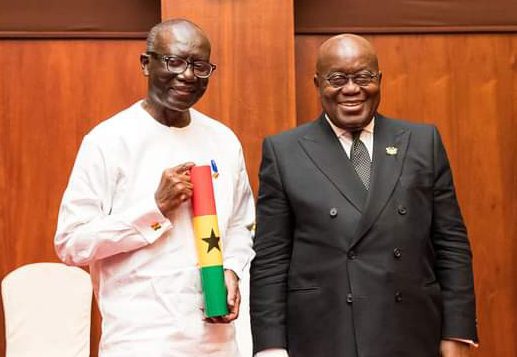 14
SHARES
76
VIEWS
Share on FacebookShare on TwitterShare on WhatsApp

Even as it has become clear that Kenneth Ofori Atta the finance minister who doubles as a cousin of Akufo Addo the President has led Ghana to a deep ditch, the NPP are not relenting on defending his recklessness which has brought nothing but shame and hardship to Ghanaians.

It appears that calls for Finance Minister Ken Ofori-Atta’s head over Ghana’s current economic misfortunes may have come to naught.

Information Minister, Vincent Kojo Oppong Nkrumah says justifications so far for Ken Ofori-Atta to step down are neither here nor there.

Many sound critics including former President John Mahama have called for Ofori Atta to be sacked after running the fiscal space into a crisis which has brought the call of IMF after months of denial.

This comes after President Akufo-Addo called for engagement to begin with the International Monetary Fund (IMF) to assist save the country from being plunged into any more difficulties.

Rising inflation, increasing fuel prices, the rising cost of living and the dwindling value of the local currency(Cedi) on the forex market are among the few of the hardships endured by the populace as a result of the downturn.

While civil society organisations called on government to consider the IMF options earlier in the year, Finance Minister was emphatic that it was not necessary while he expressed optimism about the situation.

Following the government’s ridiculous U-turn on Friday, many have begun to question the Minister’s principles on the matter and his ability to run the public purse in times of crisis when he clear appears clueless about managing that ministry.

But Information Minister, Kojo Oppong Nkrumah held brief for him on Sunday.

Speaking on a Sunday night Talkshow dubbed The Probe hosted by Emefa Apawu of Joy News Kojo Oppong Nkrumah insisted that the U-Turn does not make Ofori Atta fall short of the confidence reposed in him by President Akufo-Addo to run the country’s finances.

“If you look at the work that our Finance Minister has led us to do in the first part before these pandemics hit us, it will not support that argument that because he was initially of the view that we can do this domestically, he should be fired. I don’t think so,” he said.

After inheriting a stable promising Economy which led to Akufo Addo appointing over 120 ministers in 2017, Ghana under the watch of Akufo Addo and his family and friends government is back to the ditch.