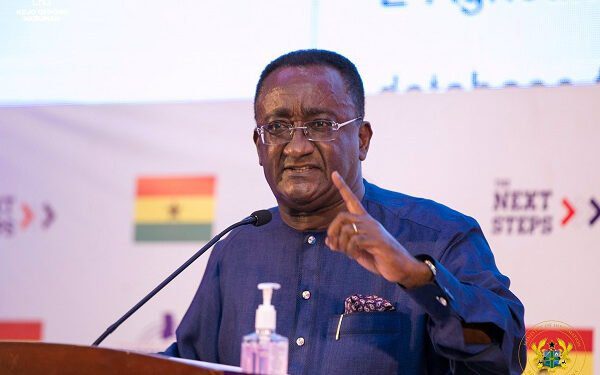 67
SHARES
370
VIEWS
Share on FacebookShare on TwitterShare on WhatsApp

The Minister of Agriculture, Dr. Owusu Afriyie Akoto has told poultry farmers to run to their various local banks to support them to survive in the current high cost of poultry feed instead of looking up to the government.

According to him, the government is not a financial institution to loan them money for their individual businesses as some expect

Poultry farmers in the country in the last couple of months have complained about the shortage and high prices of poultry feed especially maize which is produced locally. They also said the situation has compelled them to reduce the number of birds they produce at a given period.

National Chairman of the National Democratic Congress (NDC), Samuel Ofosu-Ampofo recently announced the shut down of his 25-year-old poultry farm over the skyrocketing cost of feed and operations.

I am a poultry farmer and I am closing down my farm after 25 years. I just can’t buy feed. It has been very expensive. When you buy the feed and transport to feed the birds and they lay eggs, the money you get doesn’t break even.

“I spoke with my farm manager and told him I am not a father Christmas because I always borrow money to finance the farm and I know others are also facing the same and so I am forced to close the farm down because it is not worth going into it again,” he revealed recently.

Speaking in an interview with Nana Kwdwo Jantuah on Nhyira FM, the minister in response to the situation insisted that, there is an abundance of maize on the market but further accepted the fact that the commodity is now expensive to buy.

According to him, farmers are not able to buy maize for their poultry because they have limited working capital.

To farmers who have called on the government for financial support, the minister categorically stated that the government is not a financial institution to offer them loans or any assistance they request.

“This is why we are telling you that, the government is not a financial institution, you have worked with them over the years, and therefore, the banks should have helped them increase their capital because it is a profitable venture but the banks are not doing that”.

According to him, the situation has worsened because almost every bank in the country has stopped offering financial support to farmers quoting that only 3.4% of all bank credit goes into the Agric sector.

This step by the banks he stressed, has shifted the total financial support for farmers from 100% to 3.4% of all credit in the bank industry.