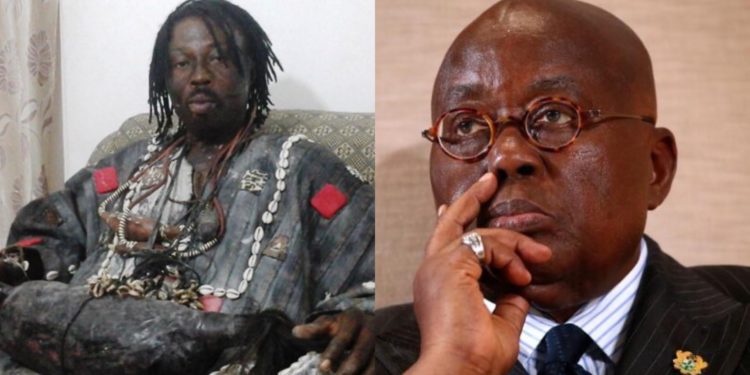 57
SHARES
315
VIEWS
Share on FacebookShare on TwitterShare on WhatsApp

Reality is finally setting in and many have seen how a dishonest person Akufo Addo is.

With many of his promises not fulfilled, Nana Addo who would have been the President Ghana never had if he was not voted for in 2016 is going to be the worst in the history of Ghana and facts are there to prove it.

In view of this, a renowned fetish priest of the Kofi oo Kofi Shrine, Nana Kwaku Bonsam(aka Authentic Man), has said that Nana Akuffo Addo will not go to heaven for hundreds of vain promises made to Ghanaians in a bid to solicit for votes among others.

According to Nana Kwaku Bonsam, the president made promises to the people on his 2016 campaign tour in the Ashanti region which included a promise to the people at Akomadan that he will build a tomato factory to complement the area if voted into power but to no avail till now.

Nana Kwaku Bonsam in an interview with Captain Smart on Onua Maakye bitterly accused the president of failing to fulfil this promise. And other hundreds he made to Ghanaians.

Based on the principles of deception, he explained that those who promise to deceive others will not go to heaven, but rather hell will be their portion.

He said this on Onua Tv a subsidiary brand of Media General, owners of Tv3.