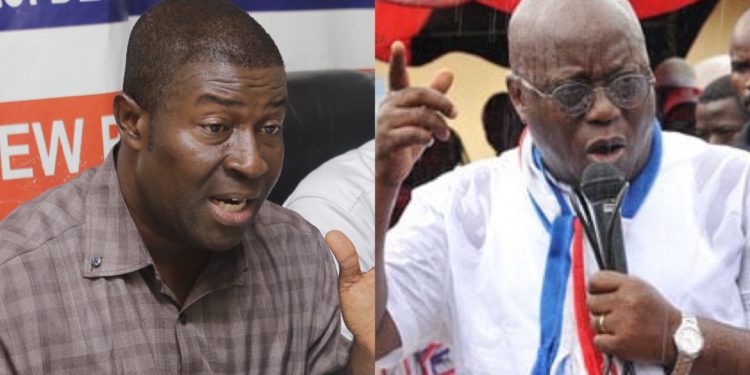 123
SHARES
681
VIEWS
Share on FacebookShare on TwitterShare on WhatsApp

Nana Akomea, the Managing Director of the State Transport Company has said that a promise by then-candidate Akufo-Addo to reduce the prices of fuel was a campaign promise which should not be held against him

According to Nana Akomea, on the campaign trail, politicians make all kinds of promises, some of which they are unable to fulfill.

He explained that President Akufo-Addo’s promise was borne out of the excitement of the political campaign and therefore should be disregarded.

Nana Akomea who was on Metro TV’s Good Morning Ghana show last week with the Member of Parliament for North Tongu, Samuel Okudzeto Ablawka accused the lawmaker of making similar promises as a member of the Committee for Joint Action, CJA.

He however added that politicians should show honesty by apologizing to the citizenry when they are unable to fulfill a promise they made.

He singled out former President John Agyekum Kufuor as a leader who conceded to not being able to fulfill a promise he made during his campaign.

“Every political leader on campaign makes the same comment. CJA, where Sammy Okudzeto says that is where he got his political influence, they made the same sentiments. All of them. When leaders are campaigning they make these promises but when they come into office, there is a reality check.

“When you are a political leader and you make certain statements as part of your messaging to the Ghanaian people and you come into office and see that the reality is different, you need to go back to tell them why you made this promise but why it is difficult for you to fulfill that promise. You need to do that.

“President Kufuor is very famous for that when he talks about some issue that he campaigned against the Rawlings government. When he came into government and realized that the reality of the situation is that he couldn’t do much about it, he actually acknowledged and accepted it. He came out and said it is different and acknowledged it. I think leadership should acknowledge it”, he said.

Viral photos indicate that Total has increased their prices of petrol and diesel to GH¢6.90

Chief Policy Analyst at Ghana Institute of Public Policy Options, Charles Wereko Brobbey has meanwhile advised the government to use the windfall from the oil revenue to cushion the price.

“We’ve been told by the President that we’re a net exporter of oil now. That means that each time oil prices go above the baseline figure of $54 per barrel [that is used for our budgeting for revenue projections], the Government of Ghana is making a windfall from the price increase and as this goes on, we the consumers are suffering from the price increase because of the application of price formula.

“So I think if the Government of Ghana wants to be a caring government, it should ensure that all the extra windfall profits which have come from $54 to $85 are applied to moderate the price increase,” he said.