by Online Editor
in News
1 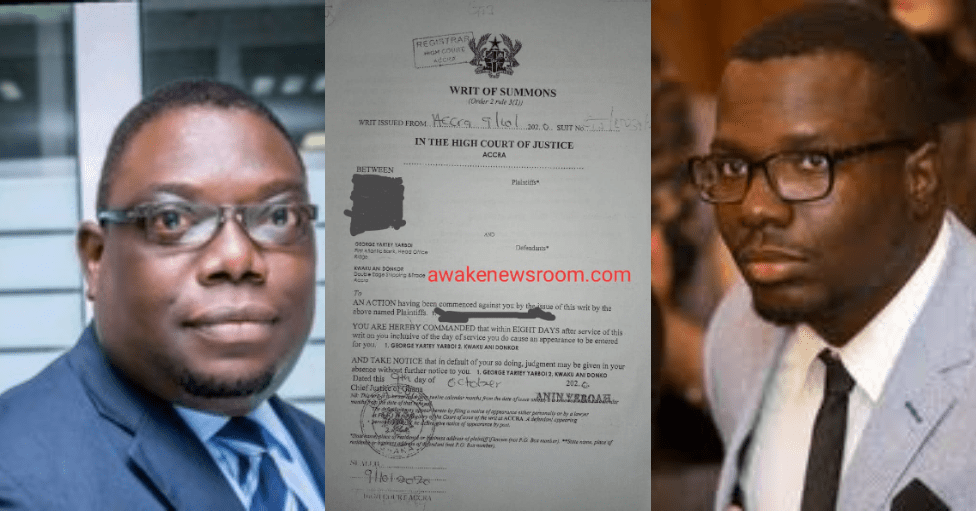 The former Banker, Mr. George Yartey Yarboi and his friend, Kwaku Ani Donkor have both been dragged to the High Court in Accra for allegedly defrauding a Venture Capital investors who are customers of his Bank.

According to the writ sighted by Awake News, the duo allegedly defrauded the Customers of Mr. Yarboi’s Bank of an amount of USD$282,000 and GHc195,500 all summing up to about GHc1,843,790.00 in a crude oil business transaction using the company, Double Edge Shipping and Trade.

The Plaintiffs are Ghanaian Venture Capitalists who by virtue of holding business accounts with the Bank became acquainted with Mr. George Yartey Yarboi.

The Plaintiffs told the Court in the writ that “sometime in August 2018, the 1st Defendant [George Yartey Yarboi], then the Head of Corporate of the Bank, informed the Plaintiffs of his Bank’s customer, who needed investment in his crude oil supply business and was finding it difficult to get investors.”

Mr.  Yarboi after this initial information then continued to pressure the Plaintiffs to assist the said individual.

When the Plaintiffs finally agreed, Mr. Yarboi introduced to the Plaintiffs his friend, Kwaku Ani Donkor who happens to be the son of a Member of Parliament as the Director and Owner of Double Edge Shipping & Trade as players in the crude oil business in Ghana and Nigeria.

Mr. Donkor then explained to the Plaintiffs that his company, Double Edge Shipping & Trade imports crude oil, refines, and sells to Oil Marketing Companies in Ghana.

“The Plaintiffs say that the 2nd Defendant [Kwaku Donkor], of Double Edge Shipping & Trade, then sent proposals about the said transaction and they decided to finally invest in November 2018” – The writ said

The Plaintiffs explained that the structure of the transaction was that upon receiving the proposals, investors would invest for a period of 60 to 90 days and then receive investments and share of profits due.

Based on the successful conclusion of the first transaction in February 2019, the investors were convinced and lured into increasing their investments for another 90 days. This subsequent transaction was to conclude in June 2019.

The “Plaintiffs say that the 2nd Defendant, instead of paying out came up with the excuse of the bank holding funds against an LC [Letter of Credit], when in fact the 2nd Defendant had at the same time transferred an amount of One Million Ghana Cedis (GHc1,000,000.00) to a Harry’s Oil and Gas who were not parties to the agreement”.

“The Plaintiffs say that any efforts to get payment from the Defendants was met with an excuse that a 3rd shipment was already in Ghana and that partners needed to top up to get the products out” to help them get yet to be paid investments and profit.

The Plaintiffs told the Court that “they reluctantly, therefore, proceeded to add on an amount of Fifty-Five Thousand United States Dollars (US$55,000) with the warning that the Defendants release their funds by September 2019 when the 3rd cycle would have ended”.

However, in September 2019, payments did not materialise forcing the disturbed investors to commerce some investigations into the circumstances surrounding the numerous excuses only for the Plaintiffs to find “out that the defendants had breached the original terms of the agreement, the mode of transaction and surreptitiously diverted payments from the Double Edge transaction account agreed to at Mr. Yarboi’s Bank” to a different account in a different bank.

Through the Plaintiffs’ said upon further investigations, they discovered that the two Defendants had formed another company by name Mandus Dei Limited right from the onset, clearly showing premeditated intent to defraud them.

However, Mr. Yarboi and Mr. Donkor once again failed to follow through forcing the Plaintiffs to institute legal action against the two. 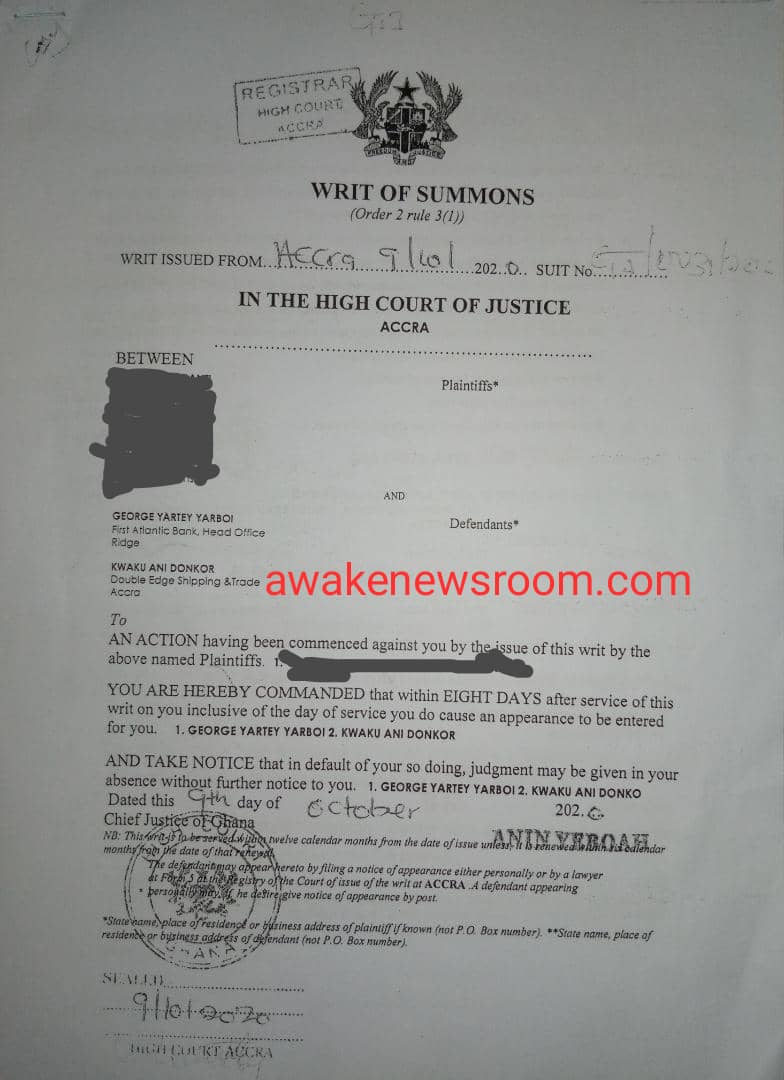 The plaintiffs are asking the Court to among other things compel the two gentlemen to pay their investments with interest as its clear their intent is to continue working with investors funds and not pay back.

In an interview with Awake News, Mr. George Yartey Yarboi admitted having been served with the writ and entered an appearance on same but declined to comment on the matter saying “it already in Court and that he cannot speak to the issues”. Awake News’ efforts to reach Mr. Donkor’s both Ghana and Nigeria mobile phone numbers remain unsuccessful as the two numbers are still off at the time of filing this report.

Election 2020: Kevin Taylor details why Ghanaians must vote against Akufo-Addo