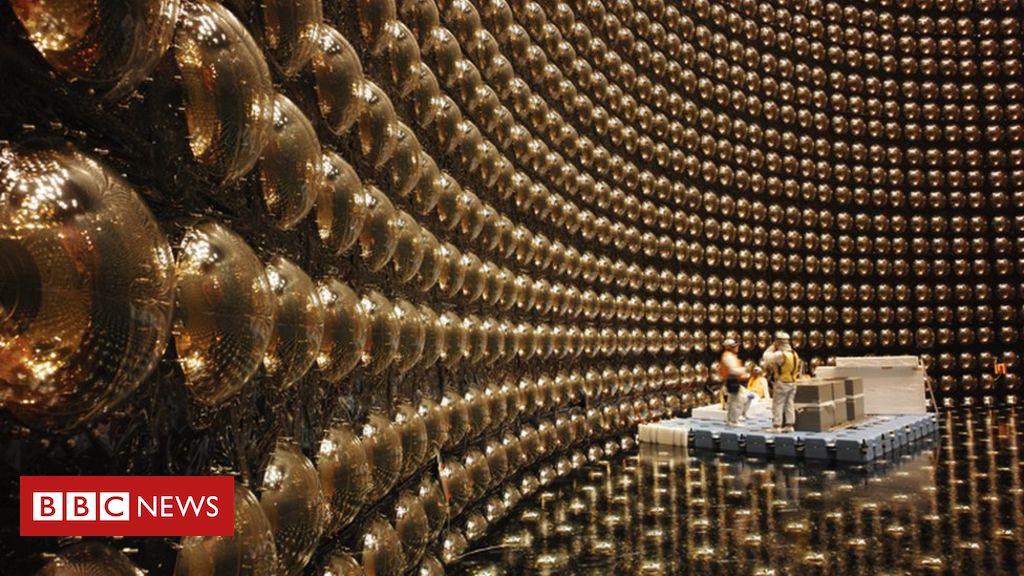 Stars, galaxies, planets, pretty much everything that makes up our everyday lives owes its existence to a cosmic quirk.

The nature of this quirk, which allowed matter to dominate the Universe at the expense of antimatter, remains a mystery.

Now, results from an experiment in Japan could help researchers solve the puzzle – one of the biggest in science.

It hinges on a difference in the way matter and antimatter particles behave.

The world that’s familiar to us – including all the everyday objects we can touch – is made up of matter. At tiny scales, this matter is composed of atoms and these atoms are in turn composed of sub-atomic particles, such as electrons, protons and neutrinos.

Today, there is much, much more matter than antimatter in the Universe. But it wasn’t always this way.

The Big Bang should have created matter and antimatter in equal amounts.

“When particle physicists make new particles in accelerators, they always find that they produce particle-antiparticle pairs: for every negative electron, a positively charged positron (the electron’s antimatter counterpart),” said Prof Lee Thompson from the University of Sheffield, a member of the 350-strong T2K collaboration, which includes a relatively large number of scientists from UK universities.

“So why isn’t the universe 50% antimatter? This is a long-standing problem in cosmology – what happened to the antimatter?”

However, the knowledge that particles and antiparticles are always produced as a pair is a problem. When a matter particle meets its antiparticle, they “annihilate” – disappear in a flash of energy.

During the first fractions of a second of the Big Bang, the hot, dense Universe was fizzing with particle-antiparticle pairs popping in and out of existence. Without some other, unknown mechanism at play, the Universe should contain nothing but leftover energy.

“It would be pretty boring and we wouldn’t be here,” Stefan Söldner-Rembold, head of the particle physics groups at the University of Manchester, told BBC News.

Something must have happened to tip the balance.

That’s where the T2K experiment comes in. T2K is based at the Super-Kamiokande neutrino observatory, based underground in the Mozumi mine located in the Kamioka area of Hida city in central Honshu.

Researchers working on T2K used the Super Kamiokande detector to observe neutrinos and their antimatter counterparts, antineutrinos, generated 295km away at the Japanese Proton Accelerator Research Complex (J-Parc) in Tokai. T2K stands for Tokai to Kamioka.

As they travel through the Earth, the particles and antiparticles oscillate between different physical properties known as flavours.

Physicists think that finding a difference – or asymmetry – in the physical properties of neutrinos and antineutrinos might help us understand why matter is so prevalent compared with antimatter. This asymmetry is known as charge-conjugation and parity reversal (CP) violation.

It is one of three necessary conditions, proposed by the Russian physicist Andrei Sakharov in 1967, that must be satisfied to produce matter and antimatter at different rates.

After analysing nine years’ worth of data, the researchers found a mismatch in the way neutrinos and antineutrinos oscillate by recording the numbers that reached Super Kamiokande with a flavour different from the one they had been created with.

The result has also reached a level of statistical significance – called three-sigma – that’s high enough to indicate that CP violation occurs in these particles.

“While CP violation involving quarks is experimentally well established, CP violation has never been observed for neutrinos,” Prof Söldner-Rembold, who was not part of the T2K collaboration.

“The violation of CP symmetry is one of the (Sakharov) conditions for a matter-dominated Universe to exist, but the quark-driven effect is unfortunately much too small to explain why our Universe is mainly filled with matter.”

He added: “Discovering CP violation with neutrinos would be a great leap forward in understanding how the Universe was formed.”

He said the results from T2K “give strong hints” that the CP violation effect could be large for neutrinos.

This would mean that the next-generation neutrino experiment DUNE, which is currently being constructed in a mine in South Dakota, might detect the effect faster than expected.

Prof Söldner-Rembold is a member of the DUNE scientific team and the collaboration’s spokesperson. The US experiment’s detector will contain 70,000 tons of liquid argon buried one mile underground. It will be used to discover and measure CP violation with high precision.

He added that the T2K result still “requires a theoretical model which describes how you get from this effect at the beginning, to the Universe today”.