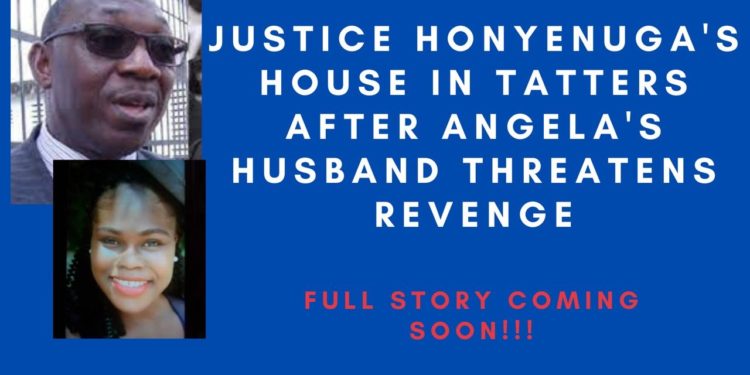 55
SHARES
305
VIEWS
Share on FacebookShare on TwitterShare on WhatsApp

Supreme Court Judge Justice Honyenuga’s home has been struck with confusion after Loud Silence Exposed his secret affair with One Angela.

Angela by our expose is the one behind pulling the strings urging Honyenuga on to take the goodies promised him by Chief Justice to continue as the presiding judge in the Opuni- Agongo Case.

Mr. Honyenuga is a married man, on the other hand Angela who is now Honyenuga’s girlfriend is also a married woman but the two on the blind side of their partners have been seeing themselves secretly and meeting in hotels to enjoy themselves.

As a result of this brewing issue in Honyenuga’s home, he has made an urgent call to Chief Justice Anin Yeboah that he is no longer interested in sitting as the Presiding judge on the Opuni and Agongo trial.

Days ago, A 7 member panel overruled an initial judgement asking Honyenuga to recuse himself as the judge from the Opuni and Agongo case.

The decision by the 7 member panel was an well hatched plan by Akufo Addo, Godfred Dame, Anin Yeboah and Jones Dotse. Remember Loud Silence Media broke the news about the secret meeting between Godfred Dame and Jones Dotse who was the presiding judge of the review panel.

Angela the girlfriend Honyenuga is a married woman. Angela’s husband has found out about the secret affair between Angela and Honyenuga and has threatened a bitter revenge by going after Honyenuga to expose him.

On the other hand, Honyenuga’s wife who is battling health Complications has questioned her husband about his affair with Angela.

The turn of event has put pressure on Justice Honyenuga who has decided to let go everything by moving away from the case so a different judge can take over.

Even as Justice Honyenuga has said to Chief Justice Anin Yeboah that he’s no longer interest in sitting in as the presiding judge on the Opuni and Agongo case, Mr Anin Yeboah has declined his call saying; Honyenuga excusing himself from the case will infuriate President Akufo Addo who purposely tasked he Anin Yeboah to get a judge in the person of Honyenuga to do their bidding by jailing Opuni and Agongo at all cost.

Details of this story will be run as editorial by Kevin Taylor host of WADR in the coming days.