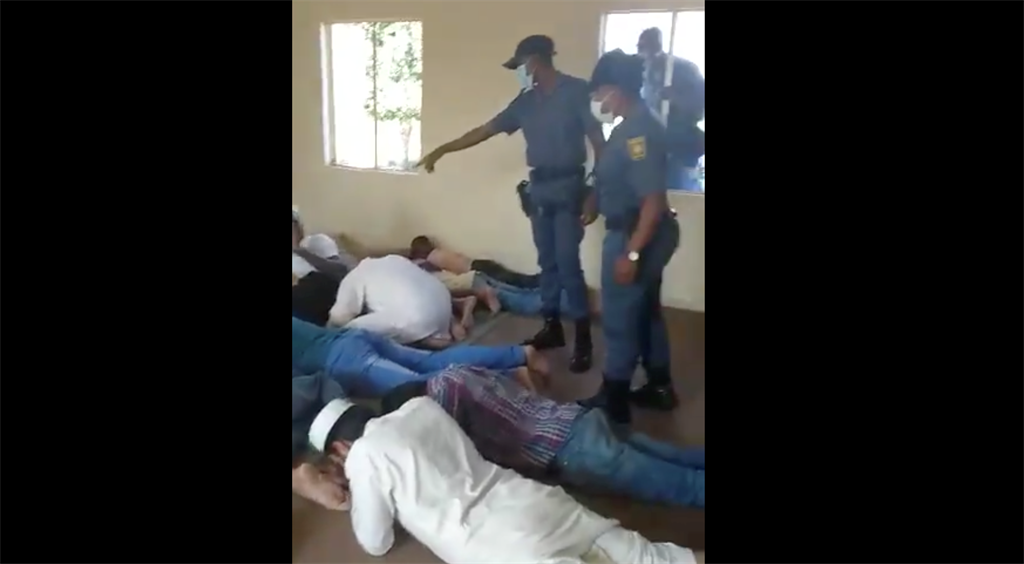 Police Minister Bheki Cele Minister Cele has issued an apology to the Muslim community for blasphemous remarks made during the arrest of congregants in Mpumalanga.

He said the incident was “a matter that is currently under an urgent investigation by the SAPS to establish the identity of the person behind such sacrilege”.

Cele said he wished to emphasise that police have a constitutional obligation to enforce the laws of the country, a duty to be executed within the confines of the same laws, applied with no prejudice against any gender, race or creed.

He was reacting to a video which circulated on social media at the weekend in which police are seen entering what appears to be a mosque, seemingly hurling abuse at congregants who are ordered to lie on the floor.

The Council of Muslim Theologians, Jamiatul Ulama South Africa, has condemned the police’s “abusive tactics”, saying that the verbal abuse of the Prophet Mohammed, as well as police entering the prayer room with their boots on, were “distressing to Muslims”.

It urged the South African Human Rights Commission and the Independent Police Investigative Directorate to investigate the incident, while calling on Muslims to observe the regulations of the national Covid-19 lockdown.

‘Video not taken in Pretoria West’

The video in question was not taken in Pretoria West as earlier believed, but in Mpumalanga. In an updated statement issued on Sunday, national police spokesperson Vishnu Naidoo said that there were indeed two separate incidents where Muslim congregants were found by police to be contravening lockdown regulations.

While 17 men were arrested in Pretoria West on Friday, the video was taken on Saturday at a religious gathering in an area called Masibekela in the Mbuzini policing jurisdiction of Mpumalanga, Naidoo said.

“Since the start of the long weekend, members of the South African Police Service (SAPS) have arrested 41 congregants in two separate religious gatherings.

“In the first incident, members of the SAPS Tactical Response Team (TRT) arrested 17 men on Friday at approximately 13:00. This after the congregants converged in a building in Pretoria West in what appeared to be a religious gathering.

“All 17 suspects are still in police custody as we await confirmation on their nationalities from the Department of Home Affairs,” Naidoo said.

They will either be released on bail, issued with a fine, and/or taken to court on Tuesday, depending on the outcome of the preliminary investigations.

“In a second incident, 24 congregants were arrested [on Saturday] after they too formed part of what appeared to be a religious gathering in… Mpumalanga. Contrary to various reports, it was these arrests, and not Pretoria West, that were captured on video which went viral on social media platforms,” Naidoo said, clarifying an earlier statement.

He said in both incidents, the congregants are alleged to have contravened the regulations of the Disaster Management Act.

Naidoo said the comments about the Prophet Mohammed are “unfortunate and unacceptable”.

“The SAPS management has directed that this matter to be investigated and the person/s who uttered such comment/s about the prophet be identified and brought to book.”

Naidoo said people of all religious denominations, particularly religious leaders, are urged to ensure total compliance with the Disaster Management Regulations Act, which are being implemented to combat the Covid-19 virus.

“These regulations are in place to ensure that all people in South Africa are safe and protected against the virus.”

Cele earlier reiterated government’s call to leaders across various sectors of society, particularly religious leaders, to ensure a national, collective and sustained effort to combat and contain the spread of the coronavirus.

Cele said he had “noted with concern” that some arrests effected across most provinces over weekends since the lockdown were of people who had gathered for religious reasons, when the only gathering permitted under the lockdown are funeral services with a limit of 50 people in attendance.

“When people, wittingly or unwittingly, violate the lockdown regulations, police are left with no choice but to enforce the law where in some instances this means arresting people,” said Cele.