Collins Dauda, 4 others in court for causing $200m financial loss to state 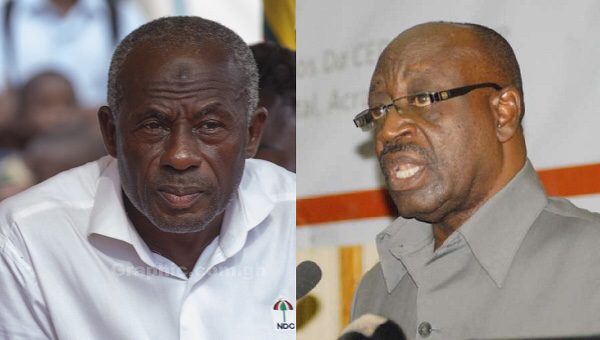 22
SHARES
122
VIEWS
Share on FacebookShare on TwitterShare on WhatsApp

The Attorney-General (A-G) and Minister of Justice has dragged a former Minister of Water Resources, Works and Housing (MWRWH), Alhaji Collins Dauda; his successor, Dr Kwaku Agyeman-Mensah, and three others to court, accusing them of wilfully causing financial loss to the state over the Saglemi Affordable Housing Project.

The state is pressing 52 counts of criminal charges against the accused persons for intentionally misapplying $200 million of state funds by paying for 1,412 affordable housing units at Saglemi, instead of 5,000 units, as Parliament had approved.

Alhaji Dauda and his alleged accomplices are also charged for wilfully causing financial loss to the state, contrary to Section 179A (3) of the Criminal Offences Act, 1960 (Act 29).

The other accused are Alhaji Dauda’s successor at the Housing Ministry from April 2015 to 2017, Agyeman-Mensah; the Chief Director at the ministry from 2009 to 2017, Alhaji Ziblim Yakubu; the Executive Chairman of Construtora OAS, the Brazilian company which constructed the affordable housing project at Saglemi, Andrew Clocanas, and a director of RMS, the Engineering, Procurement and Construction (EPC) consultancy subcontractor, Nouvi Tetteh Angelo.

The Director of Public Prosecutions, Ms Yvonne Atakora Obuobisa, on behalf of the A-G, filed the charges at the Accra High Court last Friday, just before the courts rose for their annual vacation.

The prosecutor alleged that although $196.43 million had been spent on the Saglemi Affordable Housing Project, the contractor having been paid $179.9 million, investigations carried out revealed that the cost of works executed on site, including consultancy services, was about $64.98 million, with only 651.75 acres of land used, out of the 2,172 acres available for the project.

“Investigations further revealed that only 668 housing units were completed by the contractor. These are, however, not habitable,” the A-G said, adding that “not a single house under the project has been sold and the facility remains unpaid, resulting in huge financial loss to the Republic of Ghana”.

The facts, as presented by the A-G, are that in August 2012, the then President, John Dramani Mahama, granted an Executive approval to the Housing Ministry for the construction of 5,000 affordable housing units, to be known as the Saglemi Affordable Housing Project.

The housing units, to be executed by Construtora OAS Ltd,  were to be sold to workers through mortgage arrangements provided by the then Ghana Home Loans Company.

The project was funded by Credit Suisse following a parliamentary approval.

The Ministry of Finance (borrower) and the lender signed a facility agreement on January 4, 2013 for the release of $200 million to fund the construction of the 5,000 housing units, the day on which the Housing Minister also signed the EPC agreement with Construtora OAS, represented by Clocanas, the fourth accused.

According to the prosecutor, the project was to be executed in four phases on 2,172 acres of land at a contract price of $200 million, including consultancy services.

An Escrow Management Agreement, a condition precedent to the release of the facility to the borrower, was also signed, pursuant to the facility and the EPC agreements, he said.

That was among the Finance Ministry (borrower), the MWRWH (account holder), the Bank of Ghana (account holding bank) and Construtora OAS (contractor).

“The purpose of this agreement was to ensure that the $200 million facility would be properly applied towards the development of the 5,000 housing units,” the A-G said.

Per the agreements, the prosecutor said, payments were to be effected only when specific works had been duly executed, verified and certified by the consultants of the project, the Architectural and Engineering Services Ltd (AESL).

However, the EPC agreement provided for an advance payment of 40 per cent of the contract price to the contractor within five working days of receipt of the facility in the Escrow Account.

The advance payment was to be applied towards specific works set out in the contract, with the remaining amount paid to the contractor based on fulfilment of specific milestones.

“The contractor was required under the agreement to set out the details of the achieved project milestones, which had to be verified and certified by the consultants before receiving payment,” the prosecutor said.

Credit Suisse, he said, disbursed the $198 million ($200 million less fees and transaction expenses) into the Escrow Account and the 40 per cent advanced payment to Construtora OAS effected on February 27, 2013.

He alleged that the contractor failed to apply the amount towards the intended purpose.

A portion of the Saglemi Affordable Housing Project

The prosecutor said on February 27, 2014, Dauda, without parliamentary approval, reviewed the EPC agreement and signed both the original and the revised (restated) agreement with Construtora OAS, represented by Clocanas.

The revision allegedly changed the scope of works and the application of the $200 million approved by Parliament, the A-G said.

“This new agreement required the contractor to execute the project in three phases over a site of 1,272 acres, while the $200 million was now to be applied towards the execution of only the first phase of the project, comprising just about 1,502 housing units,” he alleged.

“This was contrary to the executive and parliamentary approvals, as well as the facility and Escrow Management agreements,” he added.

On December 21, 2016, the prosecutor said, the Chief Director, Yakubu, again reviewed the original and revised (restated) agreement and signed them (second and his revised or restated), without recourse to Parliament.

That led to a further reduction in the scope of works to 1,412 housing units at a revised price of $181 million and extended the completion period to July 31, 2017, the prosecutor alleged.

According to the A-G, the AESL, which was the consultant, on April 15, 2013 signed a contract with Vito Hugo-Coordenacao e Gestao De Projectos (VHM), subcontracting the consultancy services under the EPC for $5 million over a period of 24 months, the amount provided under the EPC agreement.

While the AESL was to take $2 million, VHM was to be paid more than $2.98 million for its services.

According to the facts, in April 2015, while both companies were still providing consultancy services under the contract, the MWRWH entered into another contract for consultancy services with Ridge Management Services Solutions DWC-LLC (RMS), represented by the director and majority shareholder, Tetteh Angelo (the fifth accused), for three months for a contract sum of $5.6 million.

“This was at a time RMS was not registered in Ghana as a company. Once again, the MWRWH was required to make an advance payment of 40 per cent of the contract sum,” the facts said, adding that it was also outside the EPC agreement.

The prosecutor said the investigations revealed that Angelo, the majority shareholder of RMS, was also a Director of VHM Ghana Ltd.

He said Agyeman-Mensah, in August 2016, again entered into another agreement with RMS, referred to as “marketing implementation services”, for the sum of $2.5 million, with the ministry required to make 40 per cent advance payment.

“All this while, the AESL and the VHM were purportedly performing the same consultancy services for the project, their agreements having been extended at various times by Dauda and his successor, Agyeman-Mensah,” he said.

Payment for no work

The prosecutor further alleged that between March 2014 and January 2015, the government paid $46.13 million to the contractor, Construtora OAS, while $3.38 million was paid to the consultants, the AESL and the VHM, when no work had been duly executed.

“These payments were authorised and approved by the 1st and 3rd accused without any evidence of specific project milestones achieved by the contractor, as required under the EPC agreement,” he alleged.

Similarly, there was no justification for an $80 million payment earlier made, the prosecutor further said.

Again, he alleged, $54.1 million was okayed by Dauda and Yakubu and paid to the contractor between June 2015 and January 2017, with evidence of works and milestones achieved.

The prosecutor alleged that payments made to the AESL, the VHM and the RMS were far in excess of the $5 million stated consultancy fees and without evidence of work done.

It is not clear when the accused persons will be arraigned, as the courts are expected to resume from legal vacation in October this year.

If they are arraigned within the legal vacation, the accused persons will appear before a vacation judge. These are judges who are made to stay on and work so that the legal system will not go to sleep during the vacation period.

Since a vacation judge does not deal with substantive issues, the accused persons will only be in the vacation court for their pleas to be taken, apply for bail or for remand purposes.