Coronavirus in India: Migrants running away from quarantine 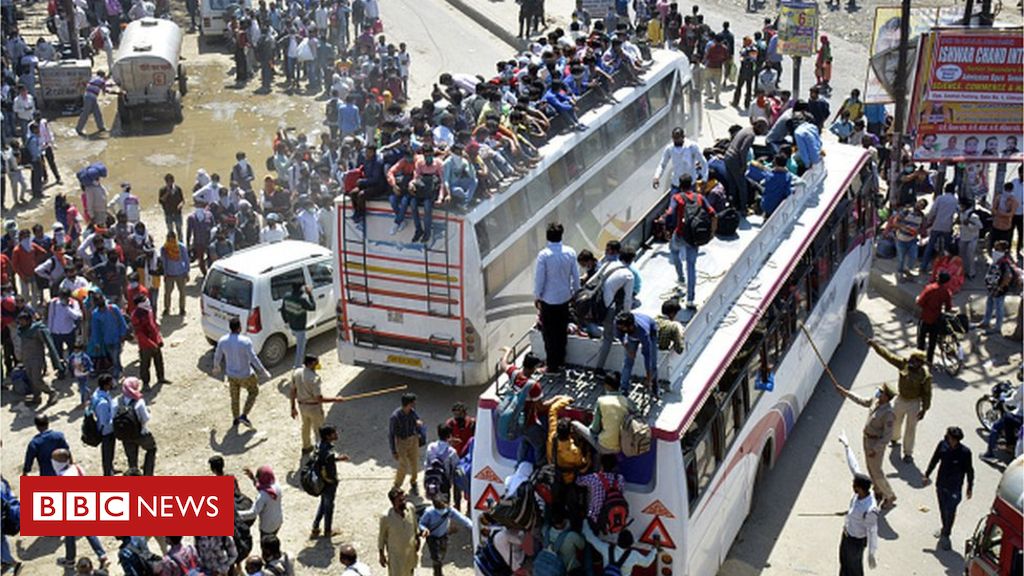 Thousands of Indians who fled cities to return to their villages after the government imposed a coronavirus lockdown have been running away from quarantine centres.

In government schools and village council buildings thousands of shelters have been set up in the northern states of Uttar Pradesh and Bihar.

But many of them lack basic facilities.

In some shelters in Bihar, people have been slipping out at night but returning during the day for free food.

Uttar Pradesh and Bihar are among India’s most populous states and have a combined population of more than 350 million. An outbreak in these densely populated regions could result in a catastrophe.

Why did people flee to villages?

Millions of people in these states – among India’s poorest – migrate to big cities like Delhi, Mumbai and Kolkata in search of livelihoods. Many also go to work in the textile and diamond industries of Gujarat.

When Prime Minister Narendra Modi announced the lockdown on 24 March to halt the spread of Covid-19, hundreds of thousands of them – forced out of jobs and with no means of earning a living – began fleeing the cities.

As thousands began their journey back home, the governments in the two states ordered a 14-day mandatory quarantine for the returnees.

Council buildings and schools were identified as places where the migrants could be housed, but most were allowed to go home after they were checked for Covid-19 symptoms.

What is happening at the centres?

Reports say most of those who went to quarantine facilities in and around their villages either left or have been slipping in and out to visit their villages and homes.

In Uttar Pradesh, reports of violations have come in from a number of districts, and the local journalists and residents I spoke to had similar stories.

One local journalist in Pratapgarh, Amitendra Srivastava, said five people who had returned to his village Babu Patti did not go to the quarantine centre set up in the school building.

He said no-one responded when villagers called the police and the control room, so he used his influence as a journalist and called the top administration and health officials.

“A team of doctors visited the village 30 hours later to check the returnees, but they were allowed to stay at home,” he says.

Who is responsible for keeping them there?

The village chiefs who have been given the responsibility to ensure that those put in quarantine remain there have not been able to do so because they do not have police or security personnel to stop people from leaving, BBC Hindi’s Samiratmaj Mishra in Noida told me.

Also, he says, the village council elections are due later in the year in Uttar Pradesh and no village head can afford to antagonise people at such a time.

Last week, after several reports of people running away from quarantine, Uttar Pradesh Chief Minister Yogi Adityanath said that if anyone was found missing from a facility, top police and administration officials would be held responsible. So, in the past few days, police have been hunting those who are running away and registering cases against them.

But the problem continues.

In neighbouring Bihar, authorities say 180,000 people have returned since the lockdown began and that more than 27,000 have been kept in quarantine.

But, reports say, corona suspects have been frequently running away, raising the fear of spreading the virus in the community.

Many village heads say the migrants quietly slip away at night to join their families, but return to the centre in the daytime for free food.

Why are people running away?

Two days ago, 16 people broke the window of their shelter in Bulandshahar district in Uttar Pradesh and escaped. The group, which included women and toddlers, had made a video complaining that they had not been given any food. Hours later, they were caught and re-quarantined, police said.

Many who left the centres have complained of overcrowding and poor facilities – some said they were not given any food, others said there was no soap or sanitiser, while some others complained about filthy toilets or too many mosquitoes.

In Bihar, journalist Amarnath Tewary, who spoke to several villagers for his story in The Hindu newspaper, told me that shelters in the state lacked even basics like electricity, toilets and beds and some didn’t even have doors or windows.

At dusk, swarms of mosquitoes overrun these centres, making it impossible to live there, he said.

Even some village chiefs say they can’t force people to remain in such squalid conditions, he said.

But reports of the migrants, who could be carrying the deadly coronavirus, being on the loose are causing concern to people.

“In my village, lots of migrant workers have returned from Gujarat and Delhi. They never went to any quarantine centre and they have been roaming around freely in the markets here,” Manoj Kumar, who lives on the outskirts of the state capital, Patna, told me over the phone.

“No-one maintains social distancing here, the local bank is overcrowded and at the vegetable market, it’s a mad scramble with so many people around,” he said, adding that the authorities had failed to control the situation

“If we are alive, it’s not thanks to the government. We are alive because of our efforts,” he said.

We Compete With Animals For Water – Damwaateon Women | General News

We Compete With Animals For Water – Damwaateon Women | General News