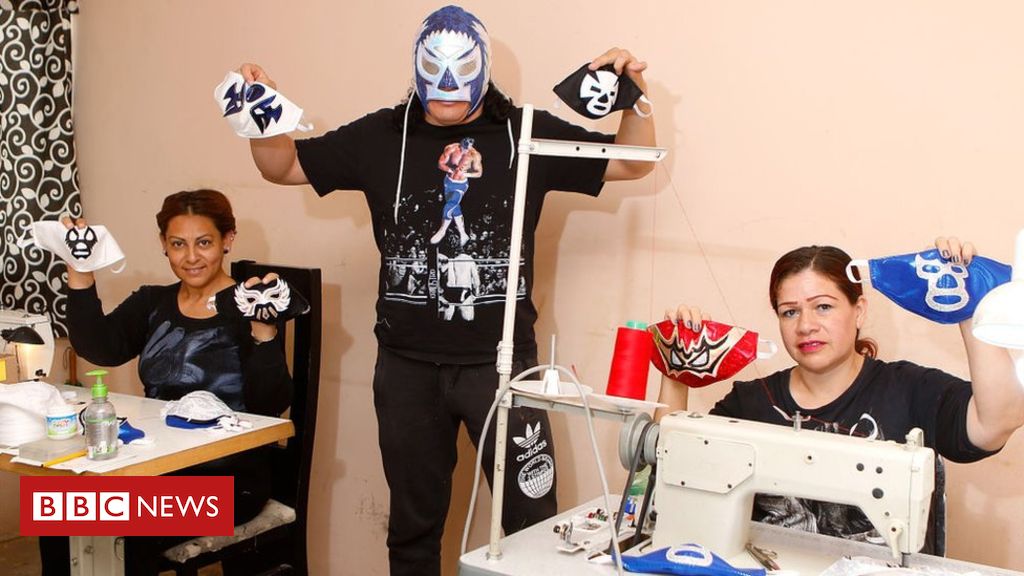 Unable to compete due to coronavirus, Mexico’s Lucha Libre wrestlers have taken up sewing face masks.

Social distancing means the iconic sport is on hold for now, so fighters need to find other ways to make money.

The tradition of wearing elaborate wrestling costumes and masks means they are well-placed to use their skills and materials to make protective masks.

It is feared coronavirus is spreading quickly in Mexico, with more than 9,500 confirmed cases.

In many parts of the country, including Mexico City, it is now compulsory to wear a mask when outdoors.

Lucha Libre is a unique form of professional wrestling in Mexico dating back over a century, and competitors wear colourful masks and spandex costumes.

Fighters cultivate big personas but hide their true identities behind their masks, so they become identified by only their mask design.

One of the greatest wrestlers in history, El Santo, is even said to have been buried in his mask when he died in 1964.

Now as social distancing measures have largely put an end to spectator sport for the time-being, fighters like El Hjio de Soberano find themselves unable to work.

“Last week we had a very difficult time and my wife says to me: ‘Why don’t we make face masks?’

“So we made some, but using the material we had for the costumes. We use the lycra and the fabrics that are used in the wrestling suit makings. They have double stitching, fabric reinforcement,” the fighter, who is part of a wrestling dynasty, told sports website ESPN.

His masks use famous designs associated with legendary Lucha Libre stars, including El Santo and Blue Demon, and sell for 150 Mexican pesos (£5) each.

They are receiving orders from all over Mexico, El Hijo de Sobrerano says. In more normal times he and his family ship wrestling costumes across Central America and the US.

In Puebla, retired wrestler Isaías Huerta had to shut his wrestler costume workshop when the government declared all non-essential businesses must close to control the coronavirus outbreak on 30 March.

Also known as El Gato Gris (Grey Cat), at first he made protective masks just for his family, but later decided to scale-up and make masks with the designs of legendary wrestlers including Dr Wagner, La Parka, and Black Taurus.

He sells them for around 50 Mexican pesos (£1.50) each, and also takes special commissions from Lucha Libre superfans.

“I’ve always loved talking about wrestling, so much so that I started sewing costumes for my teammates, and now it led me to come up with the idea of ​​wrestler masks,” he told news agency EFE.