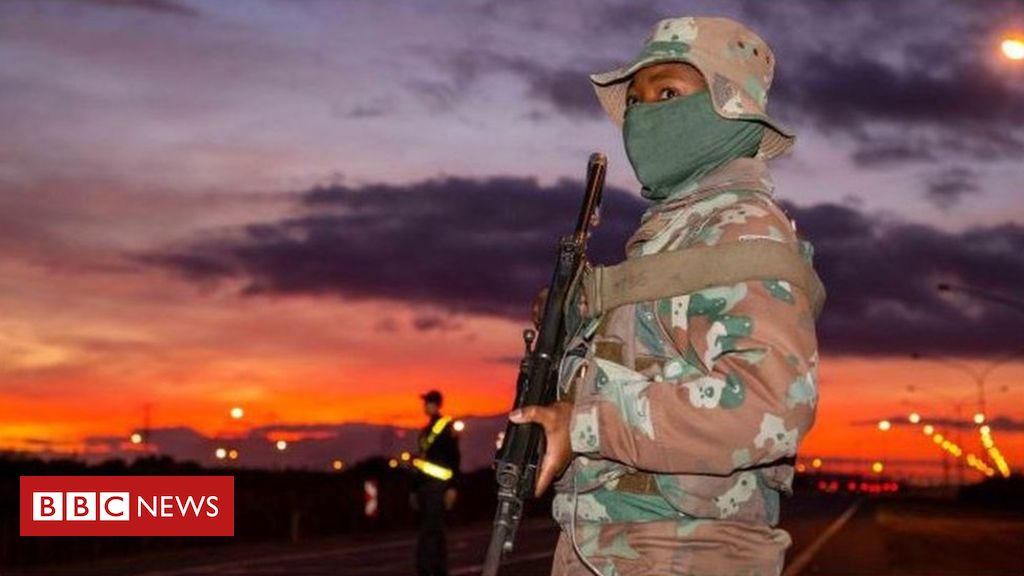 More than 70,000 extra troops will be deployed in South Africa to help enforce a lockdown intended to stop the spread of coronavirus, President Cyril Ramaphosa has announced.

South Africa has had 3,465 confirmed coronavirus cases – second only to Egypt in Africa – and 58 deaths.

The country has some of the most stringent coronavirus lockdown restrictions in the world.

But security forces have struggled to enforce them.

Since 27 March only essential service providers, such as health workers, financial services providers, journalists and retail workers, are allowed to continue going to work.

Businesses that provide essential services have been applying for a special permit from the government that allows their members of staff to go outside.

The restrictions include no jogging outside, no sales of alcohol or cigarettes, no dog-walking, no leaving home except for essential trips and prison or heavy fines for law-breaking.

The initial army deployment came as no surprise – 2,280 troops were deployed at the beginning of the lockdown 27 days ago.

But this latest deployment has shocked many – it is the country’s biggest military deployment for domestic purposes since the dawn of democracy in 1994.

Many believe the deployment, which is expected to conclude at the end of June, means that the enforcement will be strengthened and that the country could face yet another lockdown extension.

Some have raised concerns, saying the country will resemble a military state. They note that more than a dozen soldiers are already under investigation for brutality after allegedly killing a man in Alexandra township, in northern Johannesburg.

Critics adding that the middle class, which hasn’t suffered any harassment by the army is sitting comfortably, while poor people are literally dying at the hands of the soldiers.

The president’s supporters say it was a tough call to make, that the country’s police need help to control people and the army deployment will ensure that citizens respect the government measures which have been put in place to save the lives of South Africans.

After the ban on alcohol was imposed, there was a wave of looting of liquor shops.

Evidence from the first fortnight of South Africa’s lockdown appeared to show that it was able to cut and then stabilise the number of cases abruptly, although the numbers are still increasing.

President Ramaphosa said he had decided to deploy an extra 73,180 soldiers in a letter addressed to parliament on Tuesday.