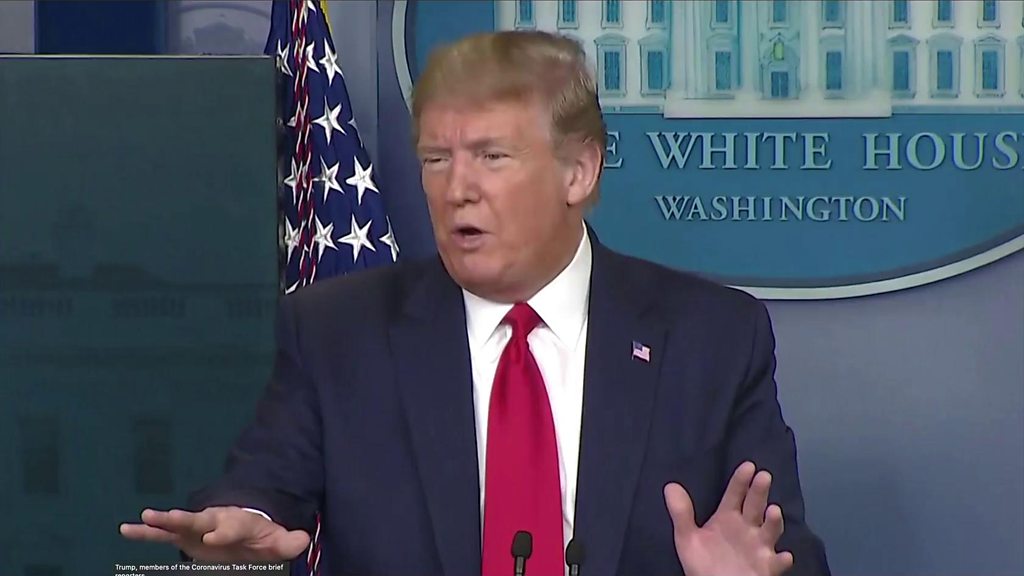 New York Governor Andrew Cuomo accused President Donald Trump of “spoiling for a fight”, as the US leader lashed out at “Democrat Governors”.

Mr Cuomo refuted the claim on Tuesday as the president took to Twitter to criticise the governor.

New York has the most cases, but has seen signs of improvement, leading Mr Cuomo and regional governors to discuss plans for eventual relaxation of restrictions.

The governor criticised Mr Trump at his daily press briefing, telling reporters that this was the governors’ prerogative, not the president’s. He would “not engage” in a fight with Mr Trump, he claimed, but added he would have “no choice” if the president the threatened the welfare of New Yorkers.

Mr Trump drew rebuke after claiming on Monday that he had the ultimate authority to lift lockdown orders, contradicting governors and legal experts.

He took the row to Twitter on Tuesday, criticising Mr Cuomo and issuing an oblique snipe at other governors.

“Tell the Democrat Governors that ‘Mutiny On The Bounty” was one of my all time favourite movies,” Mr Trump, a Republican, wrote on Twitter.

“A good old fashioned mutiny every now and then is an exciting and invigorating thing to watch, especially when the mutineers need so much from the Captain.” The tale tells of a ship’s revolt in which mutineers meet with unhappy ends, with Mr Trump appearing to compare himself to the captain.

The president aimed particular fire at Mr Cuomo, who he said was calling “daily, even hourly, begging for everything,” like hospitals, beds, ventilators for his state. New York remains the US state hardest-hit by the coronavirus outrbeak, reporting 778 deaths in the past 24 hours.

“I put my hand out in total partnership and cooperation with the president,” said Mr Cuomo on Tuesday, who had earlier called Mr Trump a “king” on CNN.

The comments follow Mr Trump’s assertion on Monday that “the president of the United States calls the shots,” during a combative press conference in which he feuded with reporters.

But the US Constitution says the states maintain public order and safety.

The Trump administration has signalled 1 May as a potential date for easing the restrictions.

The current White House recommendations for Americans to avoid restaurants and non-essential travel and keep in-person gatherings to no more than 10 people expire on 30 April.

Mr Cuomo described the president’s position as a “shift” for the president, who had left the shuttering of states to governors.

“On the first phase, the president took a different tack,” Mr Cuomo said. “It’s a shift, but it’s ok.”

What are governors saying?

Governors assert it is their prerogative when the coronavirus-related restrictions get lifted.

Responding to a Trump tweet earlier in the day claiming unilateral authority on the matter, Governor Tom Wolf of Pennsylvania said: “Well, seeing as how we had the responsibility for closing the state down, I think we probably have the primary responsibility for opening it up.”

State governors are discussing plans to resume economic activity without apparent input from the Trump administration.

New York has almost 190,000 coronavirus cases and has seen more than 10,000 deaths – among the highest rates in the world.

What strategies are other countries taking?

Globally, different approaches have been adopted to loosening lockdown restrictions.

The Chinese province of Wuhan, where coronavirus was first reported last December, has partially reopened after more than two months of isolation.

Spain has allowed around 300,000 nonessential workers to return to their jobs.

Italy – the hardest-hit country in Europe – will allow a narrow range of businesses to resume operations this week.

In France, President Emmanuel Macron has announced the country’s near-lockdown will extend until 11 May.

The UK government has said no one should expect any changes to its lockdown restrictions this week.

What else did Trump say?

Mr Trump told Monday’s briefing he did not intend to fire the top US expert on infectious diseases, Anthony Fauci – a day after the president shared a tweet with the hashtag “#firefauci”.

Dr Fauci incurred the ire of the president’s supporters after he told CNN that lives could have been saved if the US had shut down earlier during the coronavirus outbreak.

Mr Trump invited Dr Fauci – a key member of the White House coronavirus task force – to the stage in the opening minutes of the briefing.

The president said that he and Dr Fauci had been on the same page “from the beginning” and declared he liked the respected doctor.

“I think he’s a wonderful guy,” Mr Trump said, while adding that not everyone was happy with the health expert.

Dr Fauci has contradicted or corrected Mr Trump on scientific matters during the public health crisis. But on Monday, he conceded he had used “a poor choice of words” in his CNN interview.

While Mr Trump initially played down the threat of coronavirus, he was by no means alone among US public officials in doing so.

Dr Fauci himself on 17 February said the danger from coronavirus is “just minuscule” compared with the “real and present danger” of flu.