Coronavirus: Trump says peak is passed and US to reopen soon 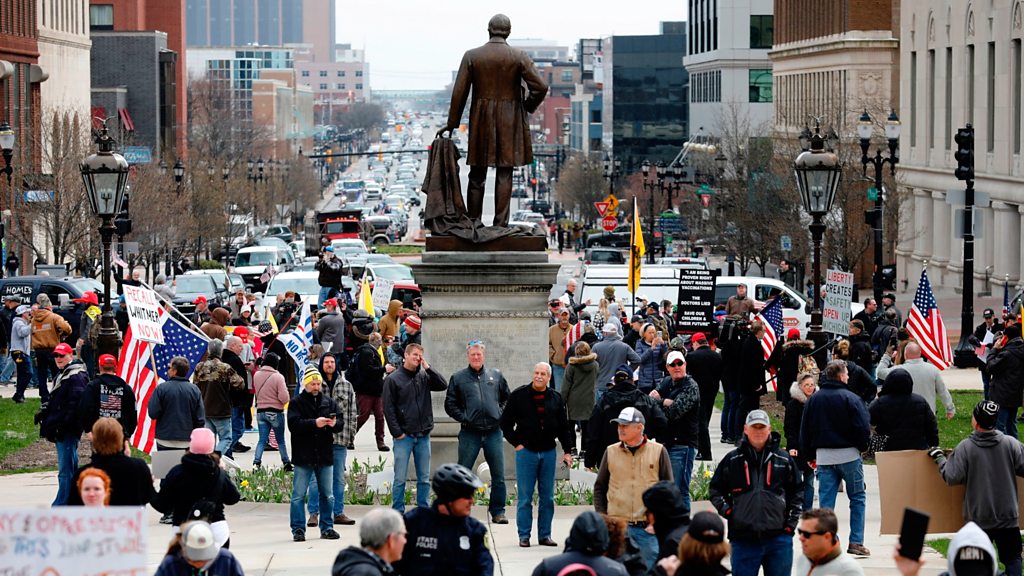 President Donald Trump says the US has “passed the peak” of new Covid-19 cases and predicted some states would reopen this month.

At the daily White House virus briefing, Mr Trump said new reopening guidelines would be announced on Thursday after he speaks to governors.

“We’ll be the comeback kids, all of us,” the president said. “We want to get our country back.”

“The data suggests that nationwide, we have passed the peak of new cases,” Mr Trump told reporters in the Rose Garden on Wednesday.

Asked why the US accounted for such a significant proportion of the global death toll of 136,908, Mr Trump accused other countries of lying about their mortality rate.

“Does anybody really believe the numbers of some of these countries?” he said, naming China.

The Trump administration has previously pencilled in 1 May as a possible date to reopen the nation, but the president said some states may be able to return to normalcy earlier than that.

“I think that will be a very exciting time indeed,” he said.

When questioned about the dangers of reopening the nation too soon, Mr Trump said: “There’s also death involved in keeping it closed.”

Millions of Americans have lost their jobs due to lockdown measures across the country, and unemployment numbers are at record levels.

Retail sales dropped by 8.7% in March, the biggest decline since tracking began in 1992, according to government data released on Wednesday.

Meanwhile, the governors of Connecticut, Maryland, New York and Pennsylvania each issued orders or guidelines that residents should wear face masks as they venture into society in the coming weeks.

“We are going to be getting back to normal – it will be a new normal,” Connecticut Governor Ned Lamont said.

On Wednesday, Los Angeles Mayor Eric Garcetti said large gatherings such as sports events and concerts would probably not be allowed in the city until 2021.

US Secretary of State Mike Pompeo meanwhile said China must show “full transparency” on coronavirus, during a call with his Beijing counterpart, Yang Jiechi, the Department of State said.

Mr Pompeo has repeatedly accused Beijing of covering up the scale of the outbreak in the early days, which China denies.

US explores possibility that coronavirus started in Chinese lab, not a market