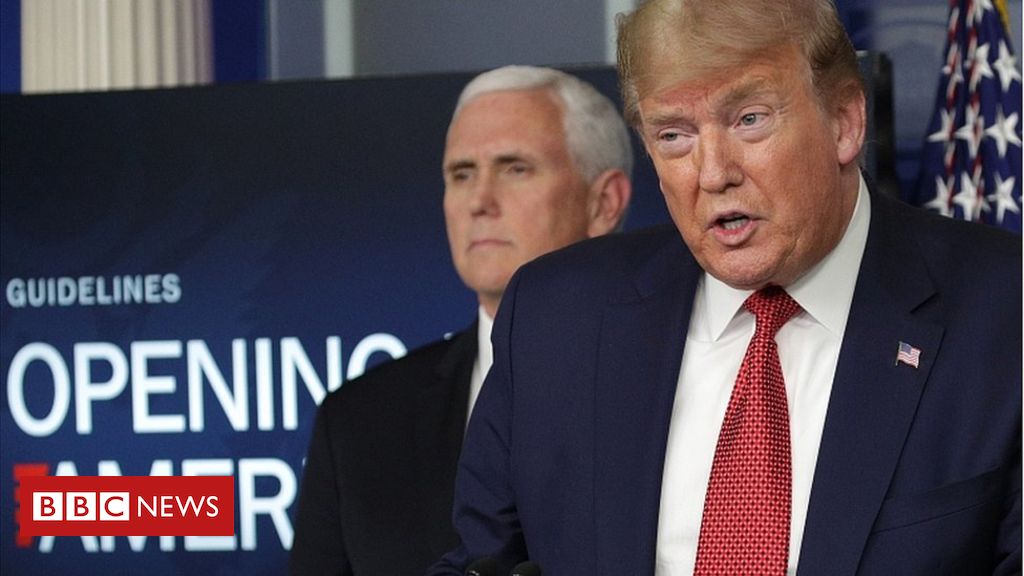 As Covid-19 continues to spread across the US, President Donald Trump has given governors guidance on re-opening state economies in the coming months.

The guidelines for “Opening up America Again” outline three phases in which states can gradually ease their lockdowns.

Mr Trump promised governors they would be handling the process themselves, with help from the federal government.

Mr Trump has suggested some states could re-open this month.

What did Trump say at the briefing?

In his daily briefing on Thursday, President Trump declared “the next front in our war – opening up America again”.

“America wants to be open and Americans want to be open,” he said. “A national shutdown is not a sustainable long-term solution.”

He said that a prolonged lockdown risked inflicting a serious toll on public health. He warned of a “sharp rise” in drug abuse, alcohol abuse, heart disease, and other “physical and mental” problems.

Mr Trump told reporters that healthy citizens would be able to return to work “as conditions allow”. He said Americans would continue to be called upon to maintain social distancing measures and to stay home if they are unwell.

He said that re-opening the US economy would be done “one careful step at a time” but he called on state governors to move “very, very quickly, depending on what they want to do”.

What is in the plan?

The administration’s 18-page guidance document details three phases to reopen state economies, with each phase lasting, at minimum, 14 days. The guidelines in full can be seen here.

They include some recommendations across all three phases including good personal hygiene and employers developing policies to enforce social distancing, testing and contact tracing.

Phase one includes much of the current lockdown measures such as avoiding non-essential travel and not gathering in groups. But it says large venues such as restaurants, places of worship and sports venues “can operate under strict physical distancing protocols”.

If there is no evidence of a resurgence of the coronavirus, phase two allows non-essential travel to resume. The guidance says schools can re-open and bars can operate “with diminished standing-room occupancy”.

Under phase three, states which are still seeing a downward trend of symptoms and cases can allow “public interactions” with physical distancing and the unrestricted staffing of worksites. Visits to care homes and hospitals can resume and bars can increase their standing room capacity.

Some regions could begin returning to normal after a month-long evaluation period, at the earliest, according to the document.

In places where there are more infections or where rates begin to rise, it could take longer.

The co-ordinator of the White House coronavirus task force, Dr Deborah Birx, told Thursday’s briefing that as states worked through the three phases, they could allow for more and more employees to return to work in increments.

Phase three would be the “new normal” and would still include suggestions that vulnerable people should avoid crowded spaces.

What has Trump told governors?

The president has argued with governors in recent days about the timing of easing restrictions and reopening businesses – but he has now conceded that his powers are limited to issuing guidelines.

On Wednesday, White House coronavirus task force leader Vice-President Mike Pence said 24% of the counties in the US have had no reported coronavirus cases. He added that half of US states have fewer than 2,500 cases.

The Trump administration had previously pencilled in 1 May as a possible date to reopen the nation, and on Wednesday Mr Trump said some states may be able to reopen earlier than that.

However, some health experts and state governors have cautioned against reopening the economy too soon.

On Tuesday, Dr Anthony Fauci, the government’s top infectious disease expert, told AP news 1 May was “a bit overly optimistic” for many areas of the country, as a strong testing and tracing system would be needed before social distancing measures were lifted.

What have US governors said?

New York Governor Andrew Cuomo said on Thursday that his state would remain under stay-at-home orders until 15 May.

Officials in the state, which is the epicentre of the outbreak in the US, say the situation is showing signs of stabilising this week, though there are still hundreds of deaths daily.

The governors of Michigan, Ohio, Wisconsin, Minnesota, Illinois, Indiana and Kentucky have announced they will work together to reopen the region.

“We recognise that our economies are all reliant on each other, and we must work together to safely reopen them so hardworking people can get back to work and businesses can get back on their feet,” they said in a statement on Thursday.

There was no timeline offered, but the governors said they planned to phase in sectors of the economy.

In Michigan, which has seen over 1,700 deaths due to the virus, there has been pushback against Governor Gretchen Whitmer’s stringent lockdown measures.

On Wednesday, residents took to the streets after the governor announced the stay-at-home order would be extended.

What are other countries doing?