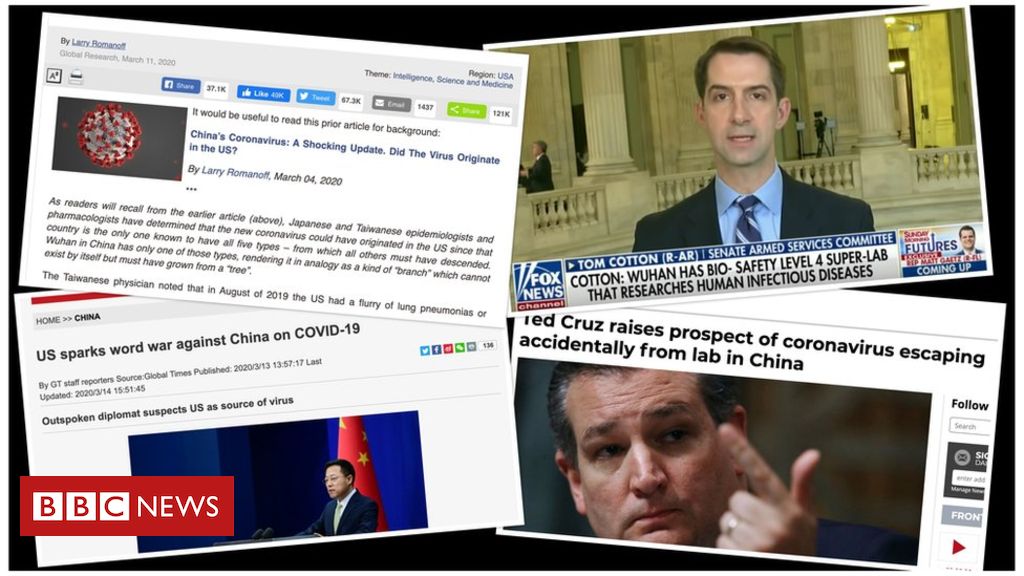 From the early stages of the coronavirus outbreak, conspiracy theories about the origin and scale of the disease were spread on online platforms.

Among these were the false claim that the virus was part of a Chinese “covert biological weapons programme”, and a baseless claim that a Canadian-Chinese spy team had sent coronavirus to Wuhan.

The claim that the virus was man-made has been pushed by numerous conspiracy groups on Facebook, obscure Twitter accounts and even found its way on to primetime Russian state TV.

And months into the outbreak, not only have these theories not faded away, but new, unverified claims have been promoted by government officials, senior politicians and media outlets in China and the US.

Zhao Lijian, a Chinese foreign ministry spokesman, has repeatedly promoted the idea – without evidence – that Covid-19 might have originated in the US.

On 12 March, he said in a tweet that it might have been the US army that brought the virus to Wuhan.

A day later, he tweeted an article by the website Global Research headlined “Further evidence that the virus originated in the US”, and urged users to read and share it. The article has since been deleted.

Chinese daily The Global Times echoed Mr Zhao’s sentiment. While stressing the diplomat had made the claim in a “personal capacity”, his remarks resonated “with similar doubts raised by the Chinese public”, the paper said.

Mr Zhao’s claims have also been amplified by a number of Chinese embassies and social media users in different parts of the world.

BBC Monitoring’s China specialist Kerry Allen said that while Mr Zhao is known for being an outspoken figure – particularly on social media – he has a different persona within mainland China and does not necessarily always represent the view of the leadership.

Founded in 2001 in Canada, Global Research is the website of the Center for Research on Globalization. According to PolitiFact, a US-based independent fact-checking website, Global Research “has advanced specious conspiracy theories on topics like 9/11, vaccines and global warming”.

The article Mr Zhao tweeted was penned by regular contributor Larry Romanoff, who reiterates the conclusion from his earlier piece – now deleted – that the virus did not originate in China.

But the Chinese research and articles in the magazine Science that he quotes do not actually call into question China being the place where the outbreak started. Instead, they only suggest that specifically the animal market in Wuhan may not have been the origin of the new coronavirus.

Mr Romanoff also claims that Japanese and Taiwanese scientists “have determined that the new coronavirus could have originated in the US”.

But the conclusion appears to be based on a now debunked Japanese TV report from February and claims made on Taiwanese TV by a pharmacology professor-turned-politician from a pro-Beijing party who Mr Romanoff wrongly describes as a “top virologist” on first mention.

Mr Romanoff also claims – without evidence – that the US military germ laboratory in Fort Detrick, Maryland, may have been the original source of the virus. He adds that “this would not be a surprise” since the facility was “totally shut down” last year due to “an absence of safeguards to prevent pathogen leakages”.

In fact, as the New York Times reported at the time, the facility was not shut down, but only suspended its research, and a spokeswoman said there were “no leaks of dangerous material outside the laboratory”.

Mr Romanoff identifies himself as a “retired management consultant and businessman” and a “visiting professor at Shanghai’s Fudan University, presenting case studies in international affairs to senior EMBA classes”.

According to The Wall Street Journal, officials at the university’s two MBA programmes were unfamiliar with Mr Romanoff.

BBC News asked Fudan University to confirm whether Mr Romanoff had any affiliations to it as a visiting professor but did not get a response.

A frequent contributor to Global Research, most of his writings seem to be critical of the US and supportive of China, including an article in which he described the 1989 Tiananmen Square student protests as an “American-instigated colour revolution”.

Among several other questionable claims, he told a podcast this month that during its early stages, Covid-19 was “Chinese-specific” and did not infect peoples of other origins and racial backgrounds.

BBC News approached Mr Romanoff for comment but did not get any response.

Claims by elements in the Chinese government and media about the US being a possible origin of the virus prompted a response from US President Donald Trump who referred to Covid-19 as a “Chinese virus”. And Secretary of State Mike Pompeo demanded that China stop spreading “disinformation”.

President Trump recently announced that he was going to halt funding for the World Health Organization (WHO), accusing it of being “very China-centric”. In response, Director-General Tedros Adhanom Ghebreyesus said it was “not the time” to cut funds to the UN agency.

But a number of US politicians and commentators have also made unfounded claims about the origin of the virus.

Fox News primetime host Tucker Carlson cited a study raising the possibility that the coronavirus “accidentally escaped from a lab in Wuhan”.

And Republican senators Tom Cotton and Ted Cruz have both raised the same prospect.

The study was published in early February as a “pre-print”, or early draft, by two Chinese researchers – Botao Xiao and Lei Xiao from Guangzhou’s South China University of Technology – and was not formally peer-reviewed. It concluded that “the killer coronavirus probably originated from a laboratory in Wuhan”.

The Washington Post reported in mid-April that two science diplomats from the US embassy paid several visits to the Wuhan Institute of Virology in 2018 and warned Washington about “inadequate safety at the lab, which was conducting risky studies on coronaviruses from bats”.

Jeremy Konyndyk, who led the US government’s response to the Ebola outbreak, tweeted in response to reports about an accidental lab leak: “The science doesn’t preclude a lab origin but does indicate it’s quite unlikely.”

Bafana star on why he’s heading back to England

From Amazon warehouses to online teaching, coronavirus is creating a spike in the war on workers

From Amazon warehouses to online teaching, coronavirus is creating a spike in the war on workers