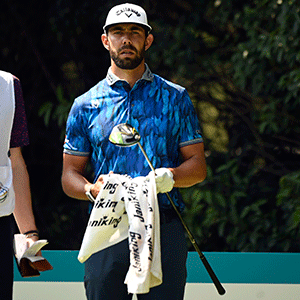 South African golfer Erik van Rooyen has not left his home in Florida for a month and believes that things will only get back to normal when a vaccine is found to stem the coronavirus pandemic.

Just last month, Van Rooyen was making his Players Championship debut, but now with golf in limbo, he is unable to get out on the course.

The 30-year-old had a stellar 2019 season up until that point, clinching his maiden European Tour title and breaking into the Top 50 of the World Golf Rankings.

Van Rooyen was looking set for a good finish at TPC Sawgrass, until he received a text message from the PGA Tour announcing the cancellation of the event.

“The atmosphere at the beginning of the tournament was incredible… I’ve only ever seen the tournament on TV so to play in it was really special, it’s the sports biggest tournament after the Majors,” Van Rooyen told Sport24 in an exclusive interview on Wednesday.

“I played well that first round and I was literally on the phone with my caddie and best friend Alex when we got a text message saying it was cancelled.

“At first I thought this was not happening… it was bizarre and strange.”

Van Rooyen stated that the impact of the pandemic hit home when the PGA and European Tour started cancelling events.

“The next morning (at TPC Sawgrass), everyone came into the clubhouse to get their bags and were packing and leaving,” said Van Rooyen.

“At the time, I thought it was a complete overreaction, I was quite naive with regards to the Covid-19 virus. Then after they started cancelling more events and it kind of hit home…

“I’ve been watching the news and seeing the data of who is affected and since then I’ve been locked up in my house.”

Last week, the PGA Tour announced plans to resume in June with the Charles Schwab Challenge at Colonial Country Club.  As of 22 April, however, there have been 834 858 positive cases of coronavirus in the United States of America with over 46 000 deaths, so that date still hangs in the balance.

And Van Rooyen believes that “it might be soon” and believes that there are still a lot of unanswered questions when golf finally resumes.

“I think initially when golf resumes, it will be different,” said the South African.

“The PGA Tour are trying to start up in June in Texas, my speculation is that perhaps that it might be too soon. There’s still a lot of unanswered questions about it, questions on safety and whether it’s early with regards to traveling…

“It will probably be different until we’ve got a vaccine. Hopefully once we find a vaccine, we can get big crowds again and Majors happen when they are supposed to happen, not like in November when we’re hopefully going to have the Masters this year.

“Life as we know it will be completely different,” Van Rooyen continued.

“I hope there is much more regard for people like doctors and nurses. It’s a much bigger threat as you can’t see it. They deserve more credit for what they’re doing.”