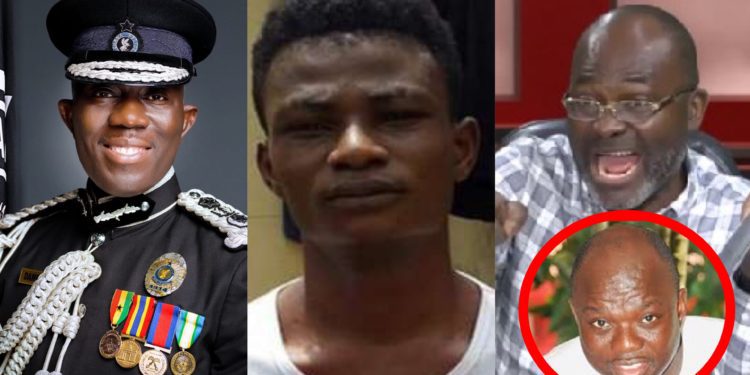 It has been 4 years 9 months now since the gruesome murder of Abuakwa North MP Joseph Adu Boakye Danquah.

However, sadly the mystery around his killing has not been unravel yet.

A few days after his murder at his shiashie residence in Accra one Daniel Asiedu aka Sexy Dondon was arrested as prime suspect to the murder.

Even though Daniel Asiedu has admitted a number of time that he killed the MP, prosecution has stalled over the years due to some interesting factors.

On the fateful day of the murder of JB Danquah, Assin North MP Kennedy Agyapong in series of media engagement said he was the first person the police called when they rushed to the seven after the crime has been committed.

Mr Agyapong in some of his remarks said, it took him to draw the attention of the police to a ladder they suspect the killer used to have access to the top floor of the building to stab the MP multiple times to his death.

Interestingly, a video which later went viral had the suspect Daniel Asiedu confessing that he was contracted by Mr Kennedy Agyapong to kill JB Danquah on behalf of Akufo Addo who is the President now.

Daniel Asiedu said, even though his confession is a tough one, he finds it prudent for that to be out because he was remorseful of the whole thing.

Kennedy Agyapong based on the above video and his own pronouncement became a party of interest in this case.

In reaction the Assin Central Mp said in a separate video below that Dr George Akuffo Dampare the current Inspector General of Ghana Police who at the time of this crime was the Accra Regional commander knows a lot about the murder he has decided to keep mute over.

Kennedy Agyapong for instance said, the IGP at the time Mr Kudalor instructed Dampare not to investigate the matter because of some names that were mentioned who were persons in the NDC government at the time.

This video was recorded months ago before Dr Dampare was appointed the IGP Weeks ago.

The Police hierarchy has decided to go deaf of these serious allegations over the last couple of months.

With the IGP knowing showing how ruthless he is in making sure law and order is enforced, it is however interesting how such a case which brought about his name being mentioned has not been prioritized by him Dr Dampare to make sure the real truth about such a sensitive case is brought to bare.

Kennedy Agyapong is notoriously known for some of these pronouncements.

In a number of his accusations, Kennedy Agyapong in same breath accused Anas and the wife of the late JB Danquah as persons who killed JB Danquah.

Kennedy in many instances suggested that there was a romantic relationship between the late JB’s wife Ivy Heward Mills and Anas and to make sure Anas have full access to Ivy, they hired someone to kill JB Danquah.

It was this same Kennedy Agyapong who endangered Ahmed Suale’s life which led to his horrific murder by showing his picture on his Net 2 Tv.

Kennedy Agyapong even said confidently that whoever that will see Ahmed Suale should harm him and that he was ready to pay any amount for that.

With Dr. Dampare now the IGP, it is only important he brings Kennedy Agyapong from wherever he is to answer questions since Ken Agyapong mentioned Dampare’s name as a party of interest in the murder of JB Danquah.

As someone who sit at the apex of the Police Service, his silence and not pushing for the real truth in this case to be make public will go a long way to hurt his exploits as an IGP who seem to be getting some applause from a section of Ghanaians for championing the rule of law and going after offenders without fear or favour.