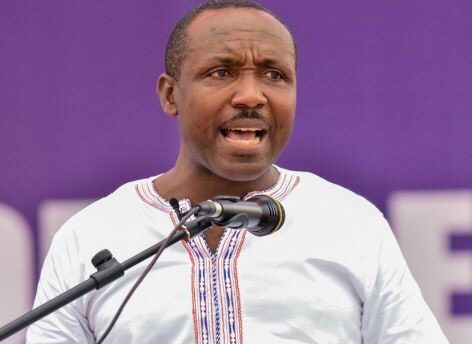 35
SHARES
194
VIEWS
Share on FacebookShare on TwitterShare on WhatsApp

With regard to concerns that the New Patriotic Party (NPP) appear to be mute over the anti-gay and lesbian bill before Parliament, the General Secretary of the ruling party, John Boadu, has stated categorically that homosexuality is not part of their ideology as a centre-right political party.

According to him, it is rather the Social Democrats which the opposition National Democratic Congress (NDC) subscribes to, that is known in the world to be the sole promoter of the activities of the LGBTQ+.

Arguing his case on Okay FM’s ‘Ade Akye Abia’ Morning Show, John Boadu noted that it is an undeniable fact that the social democrat groups condone homosexuality, and cited former US President Barack Obama and current President Joe Biden to buttress his point.

“But the NPP is a centre-right political party and we don’t accept homosexuality at all and the law that was passed by President Obama. That is why President Akufo-Addo has said that homosexuality will not be accepted under his watch as a President; not in his time as President of Ghana will the activities of the LGBTQ+ be accepted or legalised in the country,” he advanced.

He reiterated that even though the NPP government will not condone and entertain what he described as “nonsense behaviour” [ie homosexuality], the anti-gay and lesbian bill that is before Parliament should be well defined and cover all aspects of homosexuality which are not captured in the constitution.

“Right now, the new additions to the homosexuality issue have to be really defined well so that the law will be adequate to cover all the possible unnatural carnal knowledge or intercourse some people are engaging in,” he stated.

He, therefore, argued that a certain aspect of the bill that criminalises parents for not reporting their children who practice homosexuality, should be looked at again in the course of the discussion of the bill, since most of these unnatural sexual behaviours are hidden from parents.

“If we don’t look at this and allow the bill to pass, do you know that it is possible for some parents not to be aware of their children engaging in any criminal activities in the country? How do I report such a case to the police? So if the child is arrested, will the police arrest the parents as well for a crime they know nothing about?” he quizzed.

However, a couple of weeks back Mr Boadu was caught in the web of some allegations of how he has been having multiple sex bouts with Serwaa Amihere who works with Ghone Tv.

Police probe into murder of Mfantseman MP has been fantastic - Wife