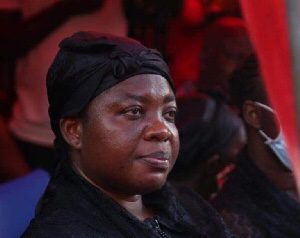 125
SHARES
697
VIEWS
Share on FacebookShare on TwitterShare on WhatsApp

Member of Parliament for Mfantseman constituency in the Central Region, Hon. Ophelia Mensah Hayford has asserted that the Police, has made significant progress into investigations surrounding the death of her late husband and former MP, Mr. Ekow Hayford.

According to her, you cannot speed up investigations and that the wheels of justice grinds slowly, hence the need for people to have patience when the Police are investigating crime.

She was speaking to journalists at the one-year anniversary celebration for the late husband by the family and the Calvary Methodist Church in Mankessim, on Thursday, October 14, 2021.

She described the work of the Police into the death of her husband as fantastic.

”I will describe the work of the Police into the death of my husband as fantastic. Some murder cases have not been resolved. There has been some progress in my husband’s case. Some suspects were arrested, and during interrogation and court proceedings, the key person(s) who shot him was arrested.

“But the unfortunate thing was that we were all anticipating that he [MP] could have been killed through contract killing…We know that God will deal with the matter and bring finality to the matter.”

She explained that the circumstances leading to the death of her husband made them think that it was contract killing.

She was also disappointed that the key suspect who shot her husband died in a shootout with the Police.

But quickly added that they have left everything to God and believe the suspect will account for his crime even in death.

The former senior Police Officer was hopeful the court would bring finality to the issue no matter how long it takes and have all the offenders punished.

She asked the public to commend the Police because they have done a wonderful job with their investigations so far.

The late MP had filed his nomination to contest the parliamentary seat again and subsequently went on a campaign tour.

While returning home on October 9, last year, at around 1 a.m., his car was caught up in a robbery spree.

The robbers had mounted barriers at Abeadze-Dominase and Duadze on the Mankesim-Assufosu highway, and were robbing commuters of their mobile phones and other valuables.

The robbers allegedly fired gunshots at the MP’s vehicle, bursting the tires and making the vehicle ran into a ditch.

The robbers surrounded the passengers and demanded their valuables, while pointing a gun at one of them, asking whether he was the MP.

The robbers allegedly pounced on him and collected his Samsung Galaxy 850 mobile phone and demanded money from him.

He was subsequently shot after he had identified himself as the MP.