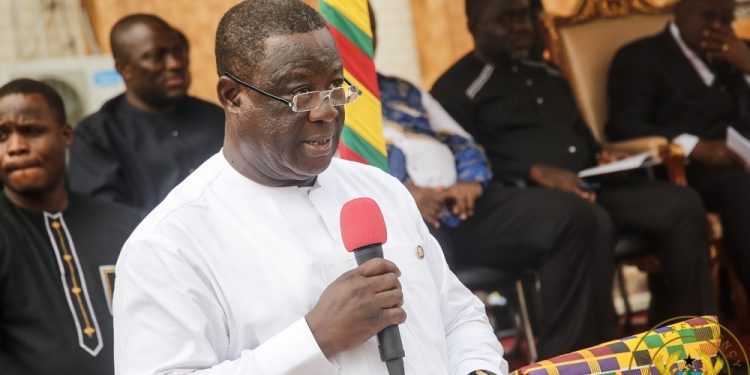 19
SHARES
104
VIEWS
Share on FacebookShare on TwitterShare on WhatsApp

The Minister of Roads and Highways, Kwasi Amoako-Atta, has stated that he gets surprised when persons who should know better get themselves involved in demonstrations for their deplorable roads to be fixed.

According to him, the government is committed to fixing the roads adding that demonstrating would not get their roads in the best shape they want it.

“It is unreasonable for anybody to say that all roads everywhere should be fixed simultaneously. So these demonstrations should stop. Sometimes you get people who are supposed to know better, well-educated people who should advise their colleagues joining demonstrations. Demonstrations don’t build roads,” he told the media when inspecting the 31.7km Kwafokrom to Apedwa road in the Eastern Region which forms part of the Accra-Kumasi dualization project.

“I have charged the contractors to ensure that they complete the stretch of the road covering a distance of 31km by the end of the year. I have asked them to introduce night work to compensate for any delay,” he said.

Residents of Manso Agoroyesum in the Ashanti Region have embarked on a demonstration over the deplorable nature of roads in the area.

The residents complain that the poor nature of the roads in the Amansie South District exposes residents to respiratory diseases.

According to them, the district is enriched with minerals, timber, and cocoa yet they cannot boast of any good road network.

They further stated that since President Nana Akufo-Addo took over management of the country from the Mahama administration in 2016, they are yet to have any meaningful development especially with road construction.

The Roads and Highway Minister Kwasi Amoako-Atta, had threatened contractors who have abandoned their sites over lack of funds will lose their contracts.

Speaking on the floor of Parliament Friday 6th November 2021, Mr. Amoako Atta revealed that most of the contractors who have abandoned their work usually lack capacity to deliver but rather use the delay in releasing funds by the government as an excuse.

“There are so many contractors in our constituencies who have been awarded contracts but are not working under the guise of non-payment. And a lot of them have not worked to the standard to be paid, as much as there are some outstanding payments,” he disclosed.