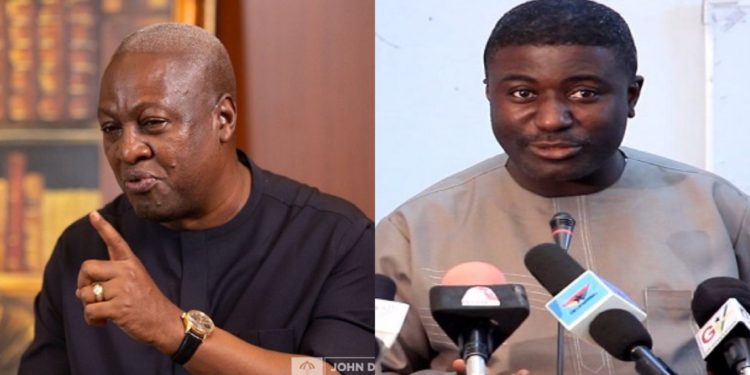 306
SHARES
1.7k
VIEWS
Share on FacebookShare on TwitterShare on WhatsApp

Former President John Mahama has reacted to some of the childish reaction of Bossman Asare who is one of the Commissioners of the Electoral Commission.

Speaking on Tv XZY to begin his last phase of the Thank You Tour in Greater Accra, Mr Mahama said he does not have a personal problem with those leading the EC but only want the right thing to be done.

He was reacting to a question the host Kwame Minkah posed to him about the tone and body language of Bossman Asare when he addressed a press conference in response to Mr Mahama’s claims that the EC has been biased in their conduct.

The Former President said, his focus is not even Bossman Asare as he is the deputy and not the main commissioner of the EC.

Notwithstanding Bossman Asare is an NPP man he said

“I know Bossman Asare as an NPP man, he was a patron of the NPP at University of Ghana before he was appointed as the EC deputy commissioner.

He cannot even hide how biased he is towards the NDC. He is the same guy who said the NDC is a threat to Ghana’s democracy even as an EC Commissioner to his stands is already know.

The 2020 NDC Presidential Candidate maintained that he is ever ready to testify his allegations of ballot stuffing and said if the EC want they can initiate an independent commission of inquiry for the truth about their performance to be know.

Mr Mahama further stated that the refusal of the Supreme Court to allow Jean Mensa in the witness box is a bad precedence which should not have happened.

He went ahead to say Mr Afari Gyan in 2012 mounted the witness box and answered all questions from NPP at the time hence the Supreme Court should have instructed Jean Mensa to mount the box.