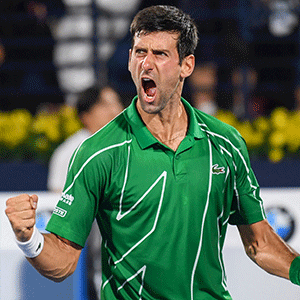 Novak Djokovic has come together with rivals Roger Federer and Rafael Nadal to form a plan to financially support lower-ranked players hit by the coronavirus pandemic.

Tennis has been suspend since the second week of March and, as yet, there are no concrete plans to resume as the coronavirus crisis continues to grip the world.

Higher-ranked players are generally okay due to past earnings in the sport, but fears have been raised over the future of players ranked outside of the top 100 who are a far more modest living from tennis.

Novak Djokovic has made a pledge to them that support is coming – and it’s coming from the top.

“I spoke to Roger and Rafa a few days ago and we had a conversation about the near future of tennis, [about] how we can contribute to help lower-ranked guys who are obviously struggling the most,” Djokovic revealed in a live webchat with Stan Wawrinka.

“A majority of players ranked between 250 to 700 or 1,000 don’t have federation support or sponsors and are independent and left alone.

“Players hopefully will contribute collectively to the relief fund that the ATP [and others] will distribute using models and criteria.

“You want to avoid giving money to a player who fits into this category (low ranking) but does not need the money compared to someone else…hopefully between $3-4.5m (£2.4m to £3.6m) will be distributed to lower-ranked players.

“If we don’t have any events [in 2020], maybe next year’s Australian Open prize money can be contributed to the fund.”

Djokovic has already made two sizeable personal donations to healthcare systems attempting to fight the pandemic, one in his native Serbia and one in Italy.

He, though, also wants to make sure that his sport and the community within it is not overlooked.

I’m glad the tennis eco-system is coming together. Everyone realises the base of tennis.

“These guys ranked 250 onwards are the ones making the future of tennis.

“We have to show them they’re not forgotten.”