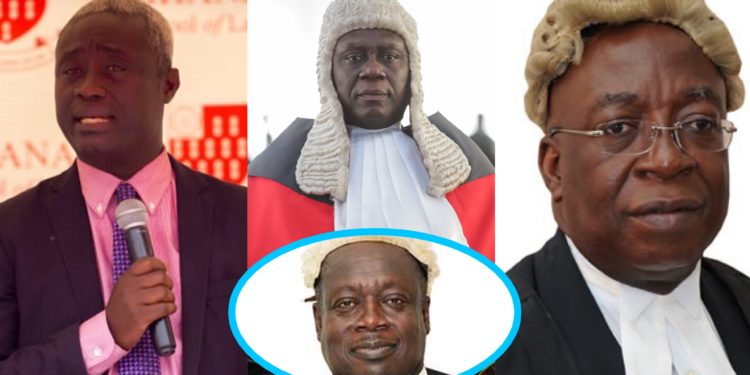 412
SHARES
2.3k
VIEWS
Share on FacebookShare on TwitterShare on WhatsApp

The Ghana law school since 1958 has been in charge solely for the training and certification of lawyers in Ghana.

While many have expressed their worry of the mass failure of persons who take the law school entrance exams, the Ghana law School, The judiciary and the General legal council has found a way of defending their actions saying the law profession is prestige hence if one intends to become a lawyer, he or she will have to be ready and prepared to go through the rigorous training process.

The recently released list of those who made it to the Ghana law school has yet again raised eyebrow about the transparency of the process of admission into the school.

While those who reportedly failed had marks that should ideally get them into the law school, many have expressed worry about how the law School has been turned into some cult where if you are not connected to someone in high authority or in there, you can’t get in even if you are fully qualified.

However, last year something happened at the Ghana law school which the Law School and the judiciary are trying to hide.

20 students who never took the entrance exams or have background in law were slotted clandestinely into the law school.

Kwasi Prempeh Erc who was the director of Legal Education at the time went on leave and Maxwell Opoku Agyemang was appointed as the acting Director of legal education.

It was during the era of Maxwell Opoku Agyemang which saw some 20 students illegally being slotted into the law school without taking the entrance exams.

Our checks on these 20 students revealed some are children of Appeals court judges, some retired judges and person coming from the Seat of Government(Jubilee House) of Ghana

When Kwasi Prempeh Erc resumed his position as the director of legal education, he found out that some 20 students were added to the final list he knew before going on leave.

When he asked his registrars about how those students made it to the list, the stated that they have no idea but was done on the direction of Maxwell Opoku Agyemang who was serving in Acting Position as the director of legal education when Kwasi Prempeh who is the substantive Director went on leave.

When the issue blew out, a Committee was set up to investigate the matter.

One notable person on the Committee was lawyer Justin Amenuvor, Mr Amenuvor was the lawyer for the Electoral Commission during the 2020 election petition.

When Maxwell Opoku Agyemang was called to come to the Committee to explain how come 20 students had their way to the law school without writing exams, he stated that it was an order which came from the Chief Justice Anin Yeboah and the Presidency for him to slot in those students secretly.

Maxwel Opoku Agyemang before being caught in this mess was someone who pulled many of the strings behind for Charlotte Osei the former EC boss to be removed from office.

Mr Agyemang our sources say was classmate of Mrs Charlotte Osei and was even eating from their house when he was a student but for whatever reason, he led the charge to remove Charlotte Osei from office.

Based on the damning nature of the response of Maxwell Opoku Agyemang to the Committee, he was quickly moved out of the Legal Education to shield him from answering further questions.

His statement of saying the Chief Justice and the Presidency knew something about those 20 students being slotted into the law school has been kept under lock from the Public.

Loud Silence Ghost team led by Kevin Taylor have intercepted documents of the Committee especially the response of Maxwell Opoku Agyemang and names of all the 20 students who were slotted into the law school illegally and those they are related to which we will be giving out in our next episode in this expose.

Visuals of Kevin Taylor breaking down the Scandal however is captured below in With All Due Respect Extended Version/State of the Nation Address.