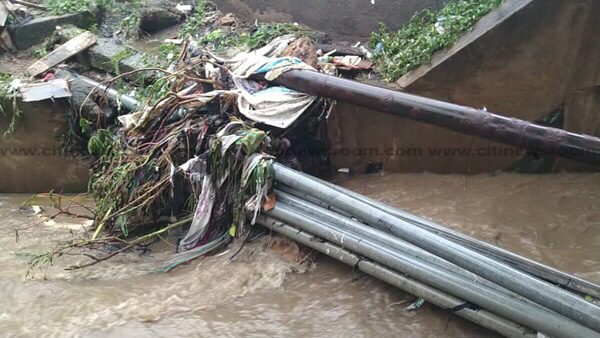 A 10-year-old girl has been carried away by floodwaters following another downpour in Koforidua on Tuesday.

The unfortunate incident occurred at Anlo-town a suburb of Koforidua.

The girl was in the company of her sister when she slipped and fell into the Nsukwao stream that had overflowed a drain in the area.

She and her sister had stopped to watch the floodwaters, which had overflowed its banks on their return from school.

“I had a distress call from one of my unit committee members that a girl who was coming from school had fallen into the Nsukwao stream and cannot be found, so I quickly reported to the police and NADMO, and we went to the scene to begin a rescue operation where we did all our best, but we couldn’t find the body.”

“According to people who were around the area, the incident happened about 2:00 pm when the girl who in the company of her younger sister on their way from school got to the stream and decided to catch a glimpse of how the floodwaters were flowing through the drainage as a result of the downpour”.

He, however, cautioned parents and teachers to educate and sensitize school children on the need to stay safe during this rainy period.

“As we speak, we have still not found the body, but we will go again tomorrow [Wednesday] morning to continue the rescue operation, but I want to use your medium to caution and advise parents and teachers to talk to their wards that once we are experiencing rainstorms extra care and attention should be given to the kids. When it is raining and the kids are in school do not let them out, keep them and let them go home after the rains. This is an unfortunate incident and I want to express my sincere condolence to the bereaved family”.

Hundreds stranded after flooding in parts of Ashanti Region