GREAT DEBATE | Jouba v Monty … Who is the best Bok fullback ever? 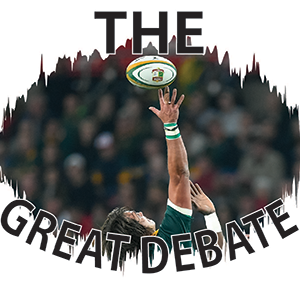 When Sport24 colleague Herman Mostert penned his greatest Springbok team of the professional era earlier this week, one of the major talking points highlighted by you, the rugby public, concerned the fullback position.

Percy Montgomery was picked at No 15, but a lot of readers in reaction suggested they would’ve opted for 1995 Rugby World Cup winner and a man considered by many to be the best that South Africa has produced in the position, Andre Joubert.

The quality of both players and their contributions to the Springboks can never be questioned, but they were contrasting players with Montgomery’s goal-kicking ability one noticeable difference.

We thought it a good idea to make cases for both players with Cape Town born and bred site editor Garrin Lambley backing Montgomery, while journalist Lloyd Burnard – with the help of some royalty down in Sharks country – revisits his KwaZulu-Natal upbringing and backs Joubert.

Montgomery, of course, enjoyed a full international career while Joubert was already 31-years-old when the Springboks won the World Cup in 1995.

There’s no doubting Percival Colin Montgomery is the greatest ever Walvis Bay-born Springbok.

But is Percy, as rugby fans came to affectionately refer to him as, the greatest Springbok fullback of all time?

I certainly believe so.

Stats don’t lie and they paint a strong case for Monty being a shoo-in in the No 15 jersey when conservation sparks regarding the Greatest Springbok XV.

A Rugby World Cup winner in 2007 in which he was the tournament’s top scorer (105) and flawless from the kicking tee (4/4) in the final against England, Monty played 102 Tests for his country when he hung up his boots in 2008.

Monty’s 100th Test – the first Springbok to achieve that milestone – was a memorable occasion at his beloved Newlands, situated in the shadows of his alma mater, SACS.

No Springbok fullback to date comes close to matching Monty’s 102-Test mark, nor to the 893 points he racked up in those appearances, in which he also scored 25 tries at a strike-rate of one in every four matches.

Adding a further string to his bow, Monty’s versatility was apparent back in 1997 against the British & Irish Lions when he started in the outside centre position, with his left-footed boot a welcome addition to the Springboks’ arsenal throughout the years.

With his bleached blonde hair flowing, Monty was also an integral part of the first Springbok team to win the Tri-Nations in 1998 and the squad that emerged victorious six years later in 2004.

Such is the mark of the man, that if South African rugby fans were to be honest, since his retirement nearly 12 years ago, the Springboks has struggled to settle on a long-term successor to fill his boots.

If you grew up in KwaZulu-Natal in the early 1990s, you knew the magic of Andre Joubert, a man who would become known as the ‘Rolls-Royce’ of fullbacks.

Ahead of his time, Joubert possessed a natural ability to spot a gap and it resulted in him earning a reputation as one of the most exciting attacking players on the planet.

He finished with just 34 Tests to his name, but that number would certainly have been higher had he played his whole career in the professional era.

I reached out to former Springbok and Sharks coach Ian McIntosh, a man who knows Joubert’s ability better than anyone, to help with this debate. McIntosh describes both Montgomery and Joubert as great players, but in terms of what they brought from an attacking point of view, he would select Joubert every time.

It all hinges on whether you have a specialist goal-kicker at flyhalf. If you don’t, then Montgomery plays. But, if you do (and the Springboks almost always do), then the luxury of unleashing an attacking weapon like Joubert is impossible to ignore.

Joubert had an instinct and flare that could not be coached.

Equally devastating from counterattack and set plays, Joubert could quickly sum up the situation in front of him and he had a superb spacial awareness. He was often used as a first receiver, particularly from second phase, and had an uncanny knack of making things happen down the blind side.

Named the 1996 SA Rugby Player of the Year, Joubert’s defence was also incredibly solid and he was as capable as anyone under the high ball. His educated left boot, too, was underrated and when he received the ball from the back, he could kick his side back into opposition territory with consistent ease.

These are areas where Montgomery perhaps edges Joubert, but in terms of raw attacking prowess, ‘Jouba’ is significantly ahead.

McIntosh tells the story of how, on the 1994 tour to New Zealand, he made one of the biggest mistakes of his coaching career by dropping Joubert for the second Test against the All Blacks, favouring the kicking of Theo van Rensburg instead. Joubert was brought on at half-time.

On another occasion, McIntosh tried to stop Joubert from employing delicate little chips over the defence against Argentina. The coach realised quickly it was in his best interests to give Joubert complete license to play with freedom, and he apologised after the game.

“I want to make it very clear that Percy is an outstanding fullback and it is very hard to pick between them, but to me, there is no ways that you can leave Jouba out,” says McIntosh.

“The late Bill McLaren didn’t name him the Rolls-Royce for nothing.”

What do YOU think? Montgomery or Joubert? Let us know your thoughts by mailing us on mysport@sport24.co.za or by tweeting us @Sport24news.