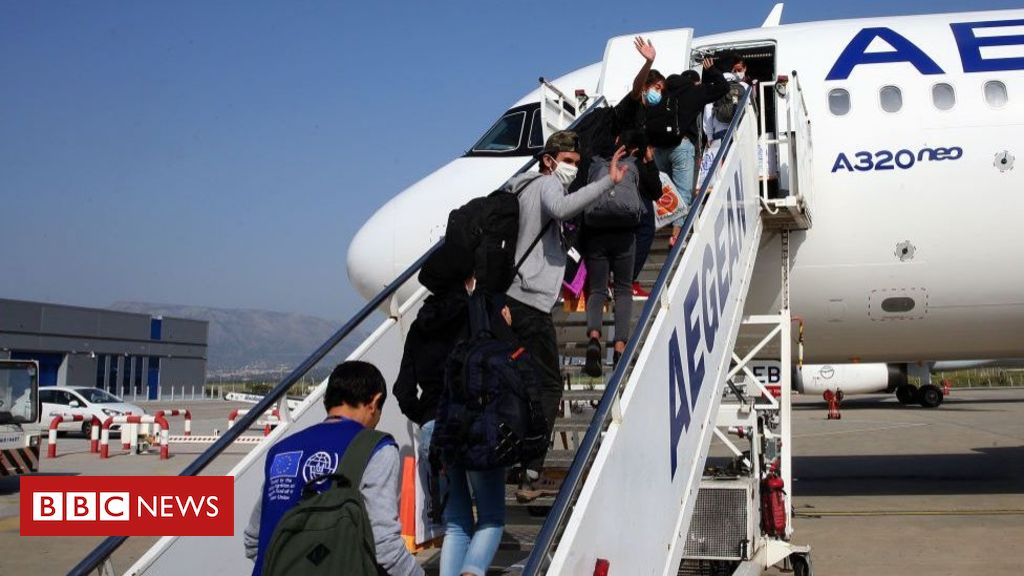 Greece has begun relocating unaccompanied minors from overcrowded migrant camps in the country.

The first 12 children, aged between 11 and 15, were moved to Luxembourg from camps on the islands of Lesbos, Samos and Chios.

Greece plans to relocate about 1,600 vulnerable children to other European countries that volunteer to host them, amid the coronavirus outbreak.

There are more than 5,000 unaccompanied children in Greek camps.

Advocacy groups have argued that leaving vulnerable minors in the camps heightens the risk of them contracting Covid-19.

The dozen children relocated, who were of Syrian and Afghan descent, had a send-off on Wednesday at Athens airport, where a Greek migration minister gave them souvenirs.

They were greeted by Luxembourg’s foreign minister at the other end.

Because of the coronavirus, the children will need to spend their first two weeks in Luxembourg in quarantine.

Greece’s deputy migration minister Giorgos Koumoutsakos said that although the number of children being relocated was small, it sent a message to other countries to follow Luxembourg’s example.

“Greece faces a crisis within a crisis – migration and the pandemic together,” he told state broadcaster ERT. “The combination makes an already difficult situation even more so, and more complex.”

Earlier this week Human Rights Watch had called on Greece to release all unaccompanied minors in the country, saying that keeping them in “unhygienic police cells and detention centres” increased the risk of them catching the virus.

“Keeping children locked up in filthy police cells was always wrong, but now it also exposes them to the risk of Covid-19 infection,” the advocacy group’s Greece researcher Eva Cosse said in a statement.

There are about 100,000 asylum seekers in Greece, most of whom are in camps, hotel rooms and flats. So far there have been two outbreaks in camps on the Greek mainland.

Camps on the Aegean islands suffer the worst overcrowding, with fewer than 6,100 places for more than 36,000 people.

Cost Of Free Electricity, Other Details To Be Announced Thursday | General News

Cost Of Free Electricity, Other Details To Be Announced Thursday | General News