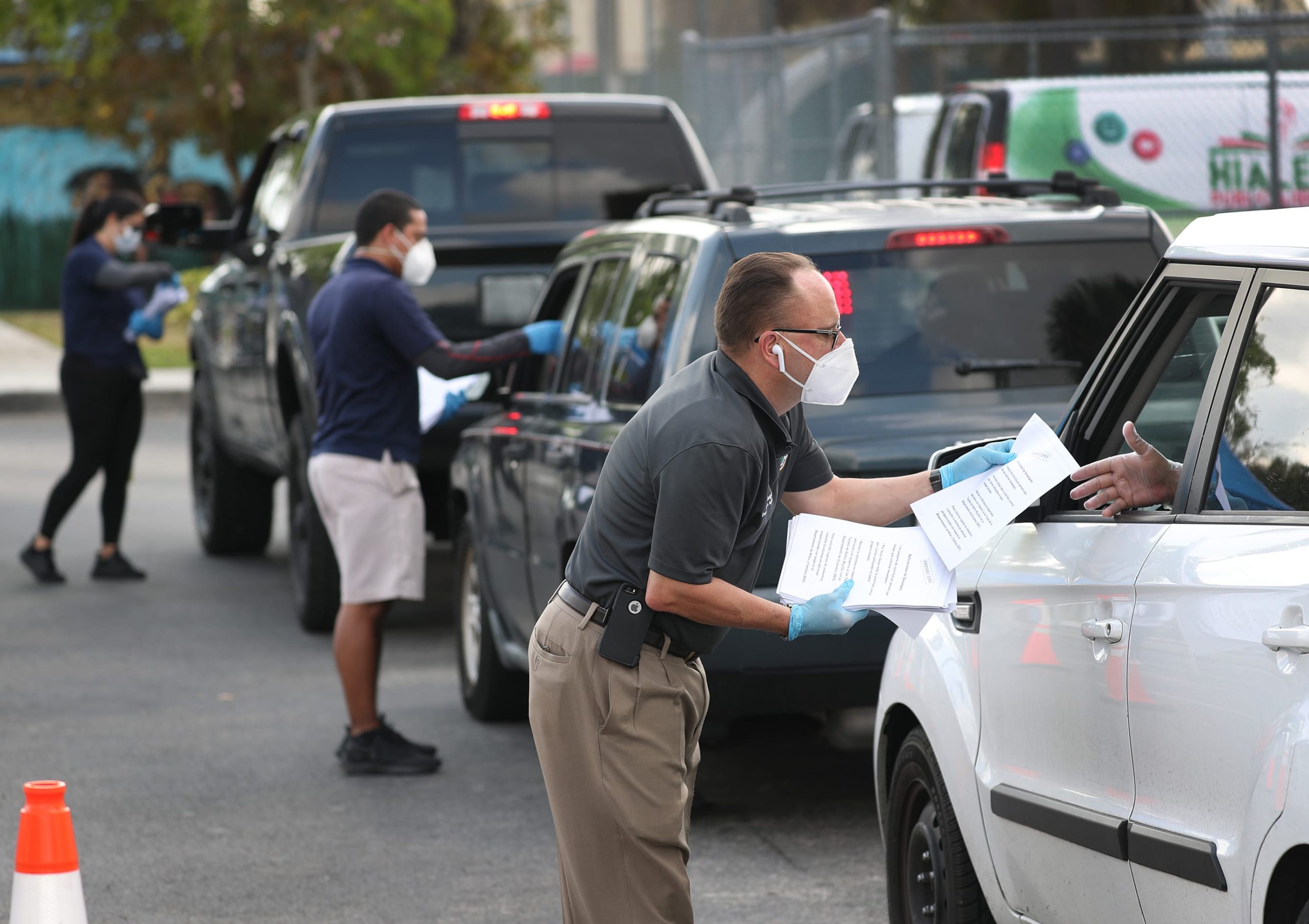 Eddie Rodriguez (R) and other City of Hialeah employees hand out unemployment applications to people in their vehicles in front of the John F. Kennedy Library on April 08, 2020 in Hialeah, Florida.

White House economic advisor Kevin Hassett warned on Sunday that unemployment could hit levels not seen since the Great Depression as the economy contracts dramatically while businesses in most parts of the nation remain shuttered due to the coronavirus pandemic.

Speaking to reporters on the White House lawn on Sunday morning, Hassett said the unemployment rate could hit 16% and “the next couple of months are going to be terrible” for economic data.

“We see an unemployment rate that approaches rates we saw during the Great Depression,” Hassett told ABC’s “This Week.” “During the Great Recession we lost 8.7 million jobs in the whole thing. Now we’re losing that many every 10 days, so the lift for economic policy makers is an extraordinary one.”

Hassett described the coronavirus shutdown as “the biggest negative shock that our economy I think has ever seen.”

President Donald Trump said earlier this week that in a phone call with Apple CEO Tim Cook, the tech leader said he expected a V-shaped recovery, meaning a quick rebound after a sharp fall. Hassett said on ABC that a V-shaped recovery will depend on the next response from the federal government.

“A lot will depend on what happens next,” Hassett said about the chances of seeing a V-shaped economic rebound rather than a longer U-shaped return to economic growth. “What we’ve done with the previous legislation is built a bridge hopefully to the other side of the disease, but then we have to make sure we have what it takes to prosper. “

Hassett told ABC, “Over the next three to four weeks, everyone will pull together to come up with a plan to give us the best chance possible for a V-shaped recovery.”

Speaking to Chris Wallace on Fox News on Sunday morning, Treasury Secretary Steve Mnuchin said he expects the economy to bounce back by the summer. “I think as we begin to reopen the economy in May and June you’re going to see the economy really bounce back in July, August, September. […] You’re seeing trillions of dollars that’s making its way into the economy and I think this is going to have a significant impact,” Mnuchin said.

“This is a scenario where we’ve closed the economy and we’re going to open the economy,” Mnuchin said. “So all these models are based upon health assumptions, how quickly we reopen, so we’ll see. My own opinion is, again, we have an unprecedented amount of liquidity in the system. We’re very sympathetic to all the people that are out of work. But there is enhanced unemployment, there’s the PPP, there’s direct deposits. [… ] And as businesses begin to open you’re going to see the demand side of the economy rebound.”

The insured unemployment rate, which compares those current receiving benefits to the size of the labor force, rose to 11% this past week, a weekly jump of 2.8%. That translates to “a barely believable” 23% when the Labor Department releases its unemployment rate calculation in two weeks, according to Paul Ashworth, chief U.S. economist at Capital Economics. The previous high for the U.S. was 24.9% during the Great Depression.

“You’re going to see numbers as bad as we’ve ever seen,” Hassett said. “GDP growth in second quarter is going to be negative. Wall Street estimates are negative 20%, 30%. We’ve done something unprecedented, stopped everything, output [has] gone to zero.”