Heavy air pollution at Tema Free Zone; one dead, other workers at risk

by Online Editor
in Ghana Business
0 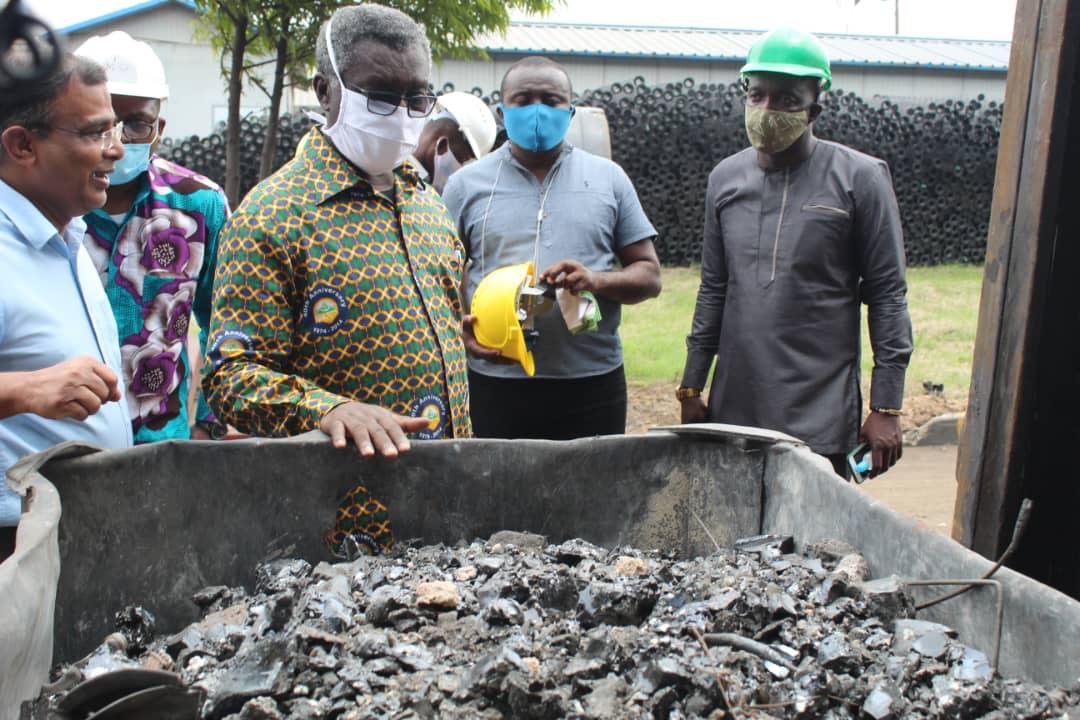 A metal scrap recycling and steel production companies at the Tema Free Zones enclave, United Steel Company Ltd, and Rider Steel Company Ltd are being accused of emitting heavy and harmful smoke at the Teme Free Zones Enclave polluting the environment and putting the lives of many works at risk whiles authorities look on.

According to Awake News‘ investigations, the constant inhaling of the toxic smoke by workers in the industrial area has led to the untimely death of one of the employees of MND Metal Company, Groege Amoah in February last year.

The situation according to investigations has been in the area for the past three years while the Environmental Protection Agency (EPA) looks on without any actions to stop the life-threatening issue to save the lives of workers in the area who are in search of their daily bread.

After close to 3years of numerous petitions, complaints, demonstrations, and calls on state institutions including EPA, Ministry of Science & Environment, Ministry of Interior, Ministry of National Security, Free Zones Board, Office of the Chief of Staff to act on the matter, Prof. Frimpong-Boateng, the Minister for Environment was on June 24, 2020 made an unannounced visit to the area where he gave the companies one week to produce a road map to the EPA on how they will solve pollution.

However, just a week after the Minister’s visit, the company continues to engage in the act leaving many to question if the situation will ever solve and innocent lives projected.

The United Steel Company and Rider Steel are manufacturing companies that purchase and recycle metal scraps to produce iron roads. Situated on a large parcel on land in the Tema Free Zones Enclave, they share boundaries with Success Aluminum Company Ltd, and MND Metals Company Ltd. The companies said to have close to one thousand workers.

During the operations of their machines for melting the metals, the factories emit a very thick smoke with the unpleasant smell emanating from mostly the back of the factories and the chimney which most at times blocking the visibility and choking workers of neighboring companies of MND Metals and Success Aluminum.

Speaking to Awake News’ Head of Investigations, Efo Korsi Senyo who is investigating the situation, the Managing Director of MND Metals Co. Ltd. Mr. Mahmud Kuhdi said the situation is serious for such that sometimes they have to pulse their work anytime the smoke starts coming from the United Steel Company.
“When the smoke starts coming very heavy like that, we can even breathe properly because it has a bad smell. That smoke is toxic and very dangerous to the health of my worker. We have to pulse working” – Mr. Mahmud narrates the situation to Awake News’ Efo Korsi Senyo

According to Mr. Kahdi, the situation is not only affecting their health but also their business.
“There was a time we had to close down for months but still we have to pay workers. We have also lost many experienced workers who we spent money on to bring from abroad due to this smoke. Our loss is more than USD800,000. Even when our customers come and experience the smoke, they don’t return again” – He said

“How can this people (United Steel Company) be using their company activities to collapse our business and put the lives of many people in danger?” – he quizzed

Some workers of MND Metals and Success Aluminum Co. Ltd who spoke to Awake News’ Efo Korsi Senyo on condition of anonymity said, their lives are in danger inhaling that harmful smoke anytime they come to work.

When asked why they continue working in an environment they deemed a threat to their lives, their reply was simple “we have no option”, “When we stop work now where do we get our daily bread?”

According to dozens of these workers, they have serious health issues diagnosed by their doctors as having been exposed to harmful smoke and some shared their medical reports with Awake News to confirm their situation.

For them, working in that area in search of their livelihoods is just as knowingly taking in a slow poison which they knew could kill them before they retire from their workplaces.

Death of an Employee of MND Metals

During Awake News’ investigations in the yet to be aired documentary, we have uncovered the story of a former employee of MND Metal who was alleged to have died from a smoke infection.

Late George Amoah was a driver at MND Metal who started complaining of chest pain and sometimes vomited blood. He then visited the hospital where he was diagnosed as having been exposed to harmful smoke and was advised to quit the job but “he had no option” just like those others who spoke to Awake News, he ignored the doctor’s advice and continued work at MND Metal.

His situation became worse and later died at the Ridge Hospital in Accra in February 2019.

An Industry expert which preferred to be known as Rode (not real name), an expatriate worker in the area in the yet to be aired documentary told Awake News’ Efo Korsi Senyo that “no smoke that emanates from a steel production factory-like United Steel Company and Rider Steel Company human-friendly or good for human inhalation.”

“No there is no such a thing” – He emphasized but was quick to add however that if necessary steps and compliance to regulatory, environmental protection laws and global standards are adhered to can help drastically minimize the “heavy, toxic and harmful nature of that smoke”.

According to him, nature (“heavy, thick, unpleasant smell”) smoke can point to one thing as a fact that the United Steel Company and Rider Steel Company are not complying with the standards.
“As an engineer in this industry with many years of experience, once you see such smoke, you should know that the company does not have (1) proper smoke filtering system – primary and secondary (2) the filters are not regularly cleaned so they are either dirty or chocked (3) the rusting metal scraps purchased from the filed are not washed with water to remove the rusting chemicals before sent to the melting chamber (4) the Hight of the chimney is far less than the 40m standard” – He explains

“In the absence of the secondary, you will see such heavy smoke with unpleasant smell” – he added

He also noted that the operation of the filter consumes a lot of electric power and most companies who have the interest of “profit” more than “human lives and environmental safety” do not operate the filters.

He empathized that the operation of only the primary filter and lack of proper cleansing of the filter can also cause an explosion of the machines during operations.

When ask why the smoke is not coming from the chimney but rather the back, Engineer Rode said because the secondary filter system is not working. He said they might have just put another machine (that consumes less power) that blows off the smoke from the chamber and “that is why you will see the smoke coming from the top opens of the factory building to the back. This, technically, you may not see that same amount of smoke spreading inside the factory”

EPA response:
AM Network publishers of Awake News have written to the Environmental Protection Agency for their response to various issues regarding the operations of United Steel Company and Rider Steel, however, their response is not yet available at the time of filing this the report.

We shall bring you their response if it is made available to us in our oncoming documentary.

Is Sir John better than others who died of COVID-19? – Kevin Taylor blast gov’t