Honyenuga should be disqualified from continuing the Opuni case – Kwaku Azar 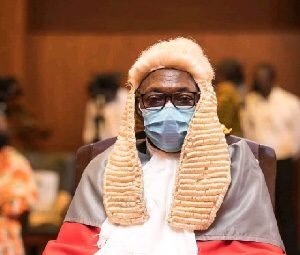 127
SHARES
703
VIEWS
Share on FacebookShare on TwitterShare on WhatsApp

Prof Stephen Kwaku Asare, has indicated that, Justice Clemence Jackson Honyenuga, the presiding judge in the ongoing COCOBOD trial involving Dr Stephen Opuni and Seidu Agongo, should be disqualified from continuing over some comments he has made.

The Criminal Court 1 of the Accra High Court dismissed a second application by the lawyer for the former Executive Director of the Ghana Cocoa Board COCOBOD, Dr. Stephen Opuni seeking the presiding judge, Clemence Jackson Hoenyenuga to recuse himself from the ongoing trial of his client.

According to the court, attempts by Dr. Opuni to have the presiding judge recuse himself from the trial are malicious and calculated efforts to delay the trial and also to seek public sympathy.

Justice Honyenuga said allegations of bias levelled against him by the accused person failed because there were no clear legal grounds to back the claim, hence the dismissal.

The court further indicated that, that it was a blatant lie for the accused person to have stated in his affidavit that the Judge had shown open hostility towards him.

In a reaction on his Facebook timeline, Kwaku Azar, as known affectionately stated the allegations from the bench are serious “and raises important questions about how the Judge has been able to determine that the defendant is seeking public sympathy, acting maliciously or stating blatant lies under oath.”

He said, if he was Dr Opuni, the words of Justice Honyenuga will put him because it clearly shows that he “will not receive a fair and impartial trial.”

“If I am the judge, I will question whether I can be fair and impartial about a defendant that I believe has told malicious lies about me.

“Therefore, without prejudice to the parties, it is fair to conclude from these statements that an intolerable adversary atmosphere has developed between Justice Honyenuga and Opuni,” Kwaku Azar’s post read further.

He noted, “under these circumstances, it is my solemn opinion that Justice Honyenuga stepped over the line in his attempt to justify the denial of the recusal motion and should be disqualified from continuing with the case.”

The High Court had ordered witness statements to be filed together with any documents before January 10, 2022.

The court also indicated that cross-examination of the accused persons would not exceed two days.

Upon receipt of a two-week medical excuse for the lawyer for the first accused person, Samuel Codjoe, proceedings have been adjourned to Monday, January 10, 2022, for continuation.