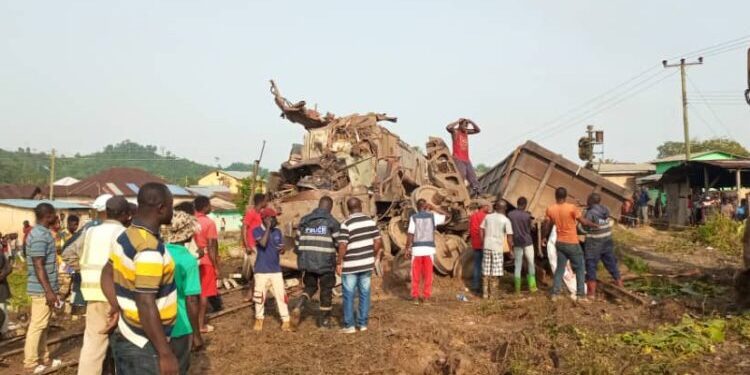 428
SHARES
2.4k
VIEWS
Share on FacebookShare on TwitterShare on WhatsApp

A head-on collision between two trains that were moving in the opposite direction has left many dead in Manso Wassa, a town in the Western Region of Ghana.

The accident occurred on Saturday, December 18, and it was reported that both of the trains were moving on the Tarkwa-Kojokrom route.

A passenger who spoke to skyypowerfm.com revealed that he boarded the train from Nsuta, a small town in the Tarkwa Nsuaem Municipality at about 6 am on the same day of the accident but the train moved at exactly 8 am.

During their journey, one passenger wanted to drop along the route but the train failed to stop which information was given that, the locomotive has a brake failure.

He was advised by another passenger to hold on tight since they are destined for a collision or a sad ending since the train cannot be stopped by any technical means. As he was holding on tight, all he heard was a big bang which he discovered that there has been a head-on collision with another train that was moving in the opposite direction from Takoradi on the same rail, he indicated that there were no serious injuries in his cabin, just minor ones.

He later discovered that more than five people have died in the other cabins including the train driver from Takoradi.

According to reports, more than five people have died but the actual number cannot be determined.

E-levy is a lazy approach to raising revenue – Pianim

Honyenuga should be disqualified from continuing the Opuni case – Kwaku Azar

Honyenuga should be disqualified from continuing the Opuni case - Kwaku Azar