Hot Audio: CID Boss Ken Yeboah has confessed the audio used to convict Oheneba Boamah of Power Fm was not his voice. 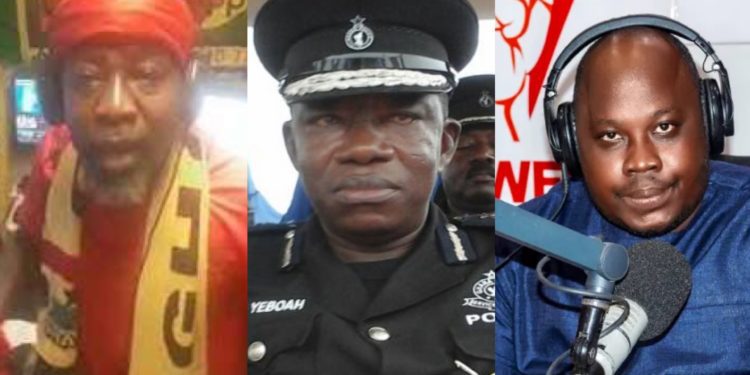 Yesterday, an Accra High Court sentenced Power Fm Journalist Oheneba Boamah to 14 days imprisonment and a fine of 3000 cedis in addition over some audio the attorney general claimed came from Oheneba Boamah which never was.

After the declaration of President Akufo-Addo as the President-elect by the Electoral Commission (EC), Bennie allegedly published a video on his Facebook wall, claiming that President Akufo-Addo had met with eight justices of the Supreme Court, led by the Chief Justice, and had influenced them.

The A-G made a case that through his publication, Bennie wants to tell the public that judges, including the justices of the apex court, decide cases not independently but by taking directives from the President.

Interestingly, the said audio was said to have come from an American based Broadcaster Kweku Skirt.

It’s however shocking that Oheneba Boamah was convicted on an audio he never produced even though Kweku Skirt himself has come out to state emphatically that indeed he is the one who did the voice audio and was never Oheneba Boamah.

In getting to the point of knowing the truth, Kweku Skirt immediately after the ruling called the CID boss of the Police service COP. Ken Yeboah asking if he knew about the development.

Ken Yeboah admitted in this audio shared below that he is currently out of Ghana but pointed out that he knew the audio was never the voice of Obeneba Boamah but that of Kweku Skirt.

When he was asked by Kweku Skirt why Boamah was convicted when he knew the audio was not his voice, the Police CID boss said that was out of his reach but was quick to add persons like Kweku Skirt are not the only people who want Ghana to progress and thus must be measured by their words.

Ken Yeboah pointed out that he didn’t prosecute Boamah and there was nothing he could have done to save the situation because the matter went to court and that was above him.

When Kweku Skirt chipped in similar conduct of Kennedy Agyapong MP for Assin Central who equally insulted a judge but has been set free without facing a jail term, the CID boss who reportedly is a strong ally of controversial lawmaker got jittery and told Kweku Skirt that was never the focus of their conversation and dropped the line.