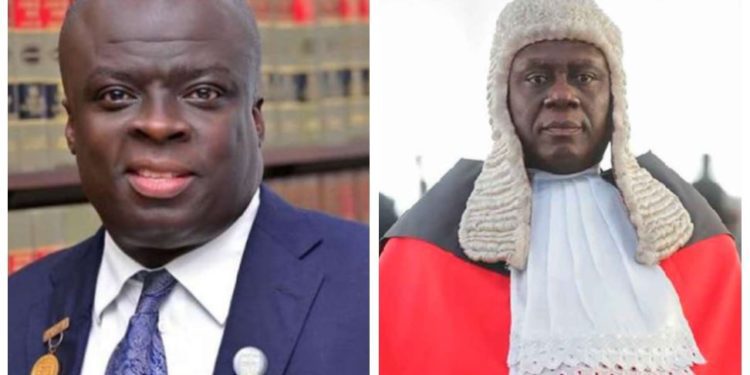 70
SHARES
391
VIEWS
Share on FacebookShare on TwitterShare on WhatsApp

The lawyer at the centre of the alleged $5 million bribe involving the Chief Justice, Kwasi Anin-Yeboah, is to appear before the General Legal Council’s (GLC) Disciplinary Committee on February 16.

This comes in the wake of a Supreme Court decision that dismissed Mr. Kwasi Afrifa’s request that the impending disciplinary proceedings be put on hold.Mr Afrifa, in August, 2021, dragged the General Legal Council to the High Court seeking to set aside nine charges levelled against him by the GLC.The Council, following its initial hearings, concluded that a case of misconduct at first instance has been made against Mr Afrifa.

The private legal practitioner had raised concerns about two GLC meetings that culminated in the charges against him.

Regarding the first meeting, which took place on July 15, Mr Afrifa said he was informed that the complainant had filed another process against him on arrival.

He urged the Council to adjourn the matter since he had not been served.

This plea, he alleges, was ignored as he was handed the 8-page process, with the hearing taking off shortly after.

He continued that after this hearing, he was informed that a prima facie case had been established and ordered to appear for a hearing on July 29.

The lawyer argues this is contrary to the due process laid out in many Supreme Court cases about the need for a fair hearing.

He insists he did not get a fair hearing since he was not aware of the entirety of the case against him hence his inability to respond to it adequately.

He further claims the GLC did not follow its own rules. These alleged breaches, he believed, was a solid basis to the High Court to exercise its power to quash the proceedings of the Council.

On the allegations against the Chief Justice, the lawyer explained that he repeated exactly what his client had stated.

This, he argued, is not reckless or confirmation of truth or otherwise of the allegations.

He stated further that he could not have assessed the truth of what he was told because he was not part of the said meetings.

Mr Afrifa justified his disclosure of this allegation by saying it was necessary to enable him to put up his defence at the General Legal Council.

He concluded by pointing out that five of the charges against him are based on Legislative Instrument 613, which he argues has been repealed by Rule 103 of L.I. 2423.

He insists the remaining charges are either repetitive, Imprecise, unknown or fundamentally flawed.

However, the High Court ruled in favour of the GLC, dismissing the case filed by the lawyer. He, therefore, sought the intervention of the Supreme Court.

He insisted the High Court decision should not be allowed to stand because it amounts to an error that must be corrected. The Supreme Court was, however, not convinced.

It ruled that Mr Afrifa had failed to make out his case. It also held it cannot restrain the GLC’s committee from carrying out its mandate and that such an application should be made at the High Court.

Hot Audio: CID Boss Ken Yeboah has confessed the audio used to convict Oheneba Boamah of Power Fm was not his voice.

Mensah Thompson of ASEPA detained by police; charged with publication of false news

Mensah Thompson of ASEPA detained by police; charged with publication of false news