I have no evidence – Investigator in Ofosu Ampofo case tells court 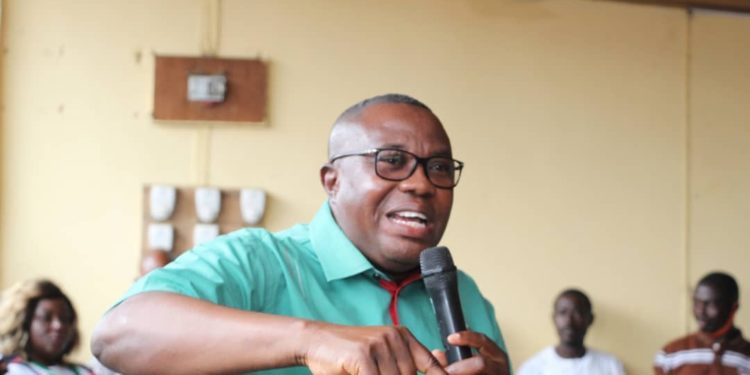 118
SHARES
654
VIEWS
Share on FacebookShare on TwitterShare on WhatsApp

Chief Inspector Bernard Berko, the investigator in the case in which the National Chairman of the NDC, Samuel Ofosu-Ampofo and Anthony Kweku Boahen are standing trial over a leaked audio tape has said he has no evidence that the two accused persons hatched a plan before the said meeting.

He also told the Commercial Division of the Accra High Court that, Kweku Boahen, the second accused person did not speak at the said meeting.

He however asserted that, though he didn’t speak at the said meeting, it doesn’t not mean  criminal charges could not be initiated against him.

Chief Inspector Berko, the third prosecution witness, made this known when he was facing further cross-examination from Lawyer Tony Lithur on his testimony.

In court on Thursday before Justice Samuel Asiedu, a Justice of the Court of Appeal sitting with an additional responsibility as a High Court judge, the investigator said, the two planned to harm the Electoral Commissioner and the Peace Council Chairperson.

When asked by Tony Lithur, whether he heard or saw A2 (Kweku Boahen) plotting against anyone leading to him being charged, the investigator, said Kweku Boahen stated in an interview that he supported the plan.

“My lord, in an open interview, on Dwaso Nsem on Adom FM, A2 (Kweku Boahen) said, he was part of the meeting where the plot was made and he totally support whatever A1 (Ofosu-Ampofo) said.”

Asked by Mr Lithur to tell the court what he meant by a plot, the investigator said, it is “a plan to cause harm to some other people” adding that “a plan to take the chair of the EC and the peace council to the cleaners.”

When Mr Lithur again asked if it was his case that, the said plot was hatched at the said meeting, the investigator said, “it was at the said meeting that they planned to put others lives in danger and also to take the chair of EC and Peace council to cleaners was made.”

When it was put to him that, he has no evidence whatsoever that, either A1(Ofosu-Ampofo) or A2 (Kweku Boahen) had hatched such a plan prior to the meeting, he responded in the negative saying “no.”

He also said no when counsel put to him that, he has no evidence that, A1 and A2 had planned to meet at that meeting.

He told the court that, it was at the meeting that, the plan to harm the EC and Peace Council Chair was made, when asked by Mr Lithur his reasons for saying that A1 and A2 have hatched the plot.

“My Lord, A2 had stated that he was part of the meeting and he supported the plan,” he told the court.

He added that, “I didn’t hear him (A2) but that does not mean when you support the idea to committ a crime, you cannot be charged to stand before court.”

Ofosu-Ampofo and Deputy National Communications Officer of the National Democratic Congress, Kwaku Boahen have both been charged.

They have both pleaded not guilty and have been admitted to bail.

The case has been adjourned to March 16, 2022 for further cross-examination.