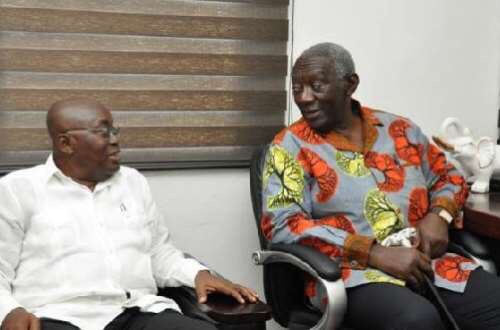 74
SHARES
412
VIEWS
Share on FacebookShare on TwitterShare on WhatsApp

President Nana Addo Dankwa Akufo-Addo has opined that Ghana would have seen the desired changes Ghanaians want if the New Patriotic Party (NPP) had stayed in power after Mr. John Agyekum Kufuor’s regime.

Just like any NPP follower believes, the President says his party is the best when compared to the main opposition party, National Democratic Congress (NDC).

“I always say, our situation in Ghana, if the NPP government had continued after President Kufuor, maybe Ghana would have realised the desired changes but we didn’t have the opportunity to continue,” President Akufo-Addo told Pure FM on Monday during his tour of the Ashanti Region.

Meanwhile, President Akufo-Addo has given the assurance that he will back any party member who is elected to lead the party in the 2024 general elections.

According to him, the collective goal is to break the eight and for that matter the elected flagbearer will have his support.

“My duty is in two folds. One is, first of all, to hold a balance to make sure there is a level playing field for all of them (aspirants) because the decision has to be the decision of the party, and whoever the party elects as its flagbearer for 2024 that person is the one I will support and campaign for the person to become president,” President Akufo-Addo stressed.

The President has today commenced a four-day working visit to the Eastern Region after wrapping up his tour of the Ashanti Region.