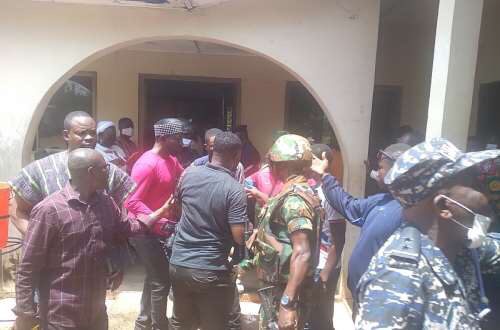 30
SHARES
168
VIEWS
Share on FacebookShare on TwitterShare on WhatsApp

Journalists numbering about six from the state-owned media and the Multimedia group were on Tuesday allegedly prevented and assaulted by the bodyguards of the President’s nominee Mr Edward Owusu and some police officers stationed at Atebubu during the coverage of the election to confirm the MCE for Atebubu Amantin.

Mr Tsatsu, the Citi FM’s reporter was allegedly hooked on the neck by one of the boys identified as Mr Ubiadu Shaibu, the NPP Deputy Constituency Youth Organizer believe to be a supporter of the nominee and his camara taken from him.

According to the reporter, the President nominee stormed out from the meeting and allegedly instructed the security personnel from the Ghana Police Service in Atebubu not to allow any media personnel inside to observe proceedings of the exercise.

The reporter added that the Bono East Regional Minister Mr Kwesi Adu Gyan and some confirmed MDCEs were present but the media could not gain access to any of them to intervene.