If you know you cannot Standup to the Bully and Tranny of Akufo Addo, With All Due Respect Sir, Do not waste the time of Ghanaians- Kevin Taylor’s Message to John Mahama 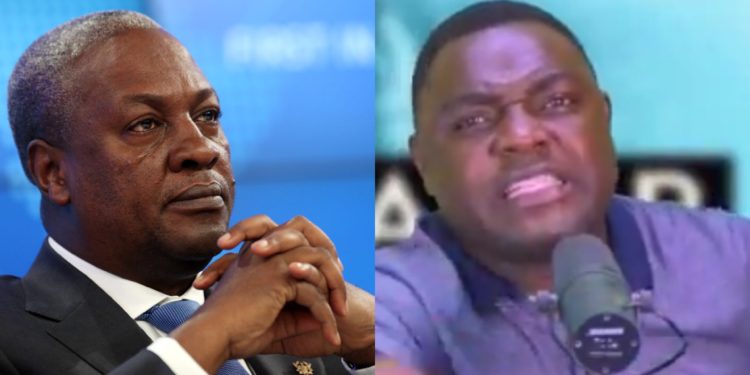 326
SHARES
1.8k
VIEWS
Share on FacebookShare on TwitterShare on WhatsApp

Kevin Taylor host of With All due respect on Loud Silence Television has sent a blunt message to Former President John Mahama as he announces plan to begin a “Thank You Your” after the 2020 elections.

In a statement published by www.myxyzonline.com says;

The first leg of his tour, which comes barely five months after the controversial Supreme Court ruling on the 2021 Presidential election dispute, shall focus on the northern belt of Ghana, where he is expected to meet NDC supporters and Ghanaians in general.

The tour according to his office will be limited to the regional capitals starting from Wa, in the Upper West region on Sunday, August 15.

Power XYZ News has learned he will spend a day in each of the regions.

Next Tuesday he will visit his home region, Savannah where he will address party supporters at Damongo and cross over to the Northern Regional Capital, Tamale on Wednesday.

According to the schedule, John Mahama will be accompanied by former Chief of Staff, Julius Debrah, and a few national executives of the National Democratic Congress (NDC).

Reacting to the above statement, Kevin Taylor said on With All Due Respect that IF John Mahama knows he cannot speak in the language Akufo Addo understands and stand up to his recklessness, he should go get some piece of land and set up a church and leave politics.

He stated Mahama cannot always be the sacrificial lamb in bringing calmness, the time has come for him to stand up against the foolery of Akufo Addo and his despotic regime.

Mr Taylor’s reason for saying this is because the regime Ghana is under kills to hold onto power.

People were shot at at Ayawaso during a by election, 9 people were gunned down by government sponsored thugs in the security services yet everyone including those foolish men at peace and Christian council never said a word because it’s Akufo Addo who did it hence John Mahama being the “Mr Nice Guy” as he always want to be will yield no result.

“This is my message to John Mahama, if you know sir that you cannot speak to the Ghanaian in a manner they will trust you that you are ready to put your life on the line to rescue them from this tyrant Akufo Addo them with all due respect go form a church

Akufo Addo knows he didn’t win the election it was out of your it does not matter, let us let it go which has led Ghana into the mess.

Be a man and speak in the language Akufo Addo understands, nobody is asking you to tell Ghanaians to kill each other but as you are about to start your thank you your let Ghanaians know you will sack Jean Mensa, you will prosecute Kwaku Agyemang Manu when elected.

Every reasonable person knows you were a better President than Akufo Addo, we have gone past comparing records, you are better than him.

It’s now time for you to face Akufo Addo squarely and take power from him because Akufo Addo does not respect the rule of law.

One he knows nothing happened in 2020 election after killing 9 Ghanaians to win power, he will kill more in 2024 to make sure his Poodle Bawumia remains in office to keep them away from prosecution”

NPP gov’t has largely reduced the suffering of Ghanaians – Bawumia