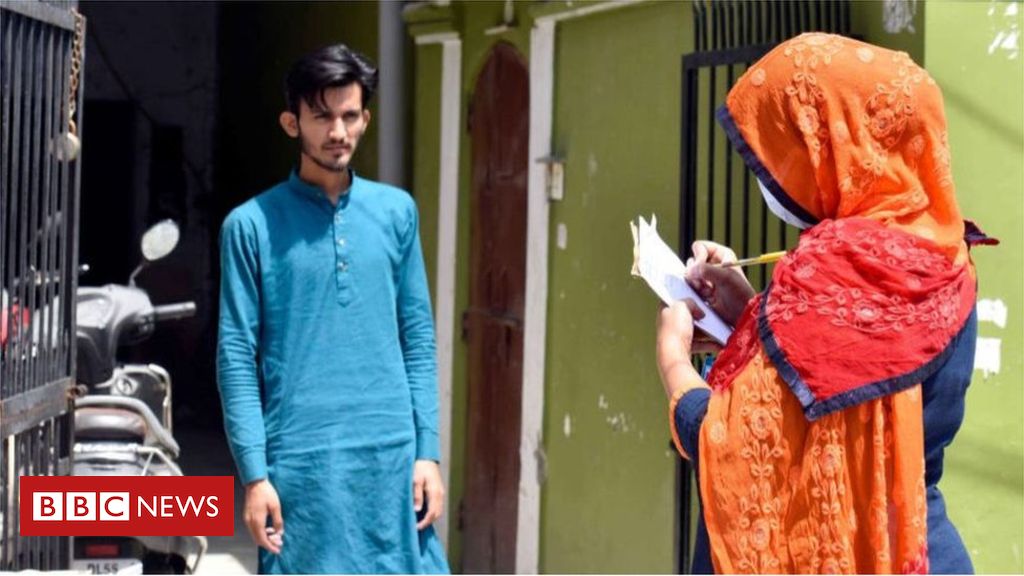 Some 900,000 female community health workers are on the frontline as part of India’s battle against Covid-19. But they are poorly paid, ill-prepared and vulnerable to attacks and social stigma, reports BBC Marathi’s Shrikant Bangale.

“The value of our life is just 30 rupees [less than $1], according to the government,” says Alka Nalawade, a community health worker in the western state of Maharashtra.

Ms Nalawade is among the state’s 70,000 Ashas, short for Accredited Social Health Activists. She is a single mother, and has been doing this job for 10 years now in Pawarwadi village, where she lives.

Ashas are drawn from local and largely rural communities, and are a crucial element in India’s primary and community health programmes. They go door-to-door educating people about maternal and child health, contraception, immunisation and sanitation, as well as enrolling them in health programmes and monitoring the results.

Their role in the fight against Covid-19 is not that different – they visit the homes they have been assigned, educate families about isolation, and monitor people for symptoms of the virus. But the risk is far greater than anything they have faced before.

For one, they don’t have the right gear, including masks or sanitiser. India is facing a severe shortage of personal protective equipment (PPE), and even doctors and nurses are unprotected.

Several Ashas told the BBC that they use cotton masks which they wash daily so they can re-use them – and for sanitiser, they have a bottle of spirit that they mix with water. One of them, Karuna Shinde, says she carries a scarf with her, which she uses to cover her face.

“Wherever there is lack of safety equipment, we have instructed the local administration about it,” says Rajendra Yadravkar, Maharashtra’s junior health minister.

“Ashas have been putting their lives in danger on a meagre salary. They should be protected. It’s the government’s responsibility to support them.”

But this doesn’t reassure the workers or their families who often discourage them from going to work.

“My husband insists that I shouldn’t go to work. He says other people such as nurses and doctors get paid a proper salary, let them do this work,” says Ms Shinde.

Apart from the fear of infection, families are also concerned about safety as there have been reports of health workers being attacked in different parts of the country.

And yet, Ms Nalawade says, the compensation – a monthly wage of 1,000 rupees – does not reflect the dangers she and her colleagues face.

She says she would earn 10 times her salary if she worked as a daily-wager on a farm. “How are we supposed to meet our household expenses with 30 rupees?” she asks. ‘‘What if I get infected with the virus? Who will look after us? Will I get treated for 30 rupees?”

She says they also face stigma for simply trying to do their job – people often stop them from entering their homes and make them stand outside while answering their questions for fear that the Ashas may infect them.

“We are working for the people, but if the same people are going to behave with us this way, what are we supposed to do?” asks Ms Nalawade.

The women also complain that they receive little recognition for their efforts.

“Nobody even mentions our work,” says Anjana Wankhede. “From the prime minister to the chief minister, everybody only praises doctors and police.”

She says that’s unfair since the government relies on the data that Ashas collect daily.

Michael Cohen To Be Released From Federal Prison Due To Coronavirus

Michael Cohen To Be Released From Federal Prison Due To Coronavirus