Israel coalition deal a victory for Netanyahu forged in isolation 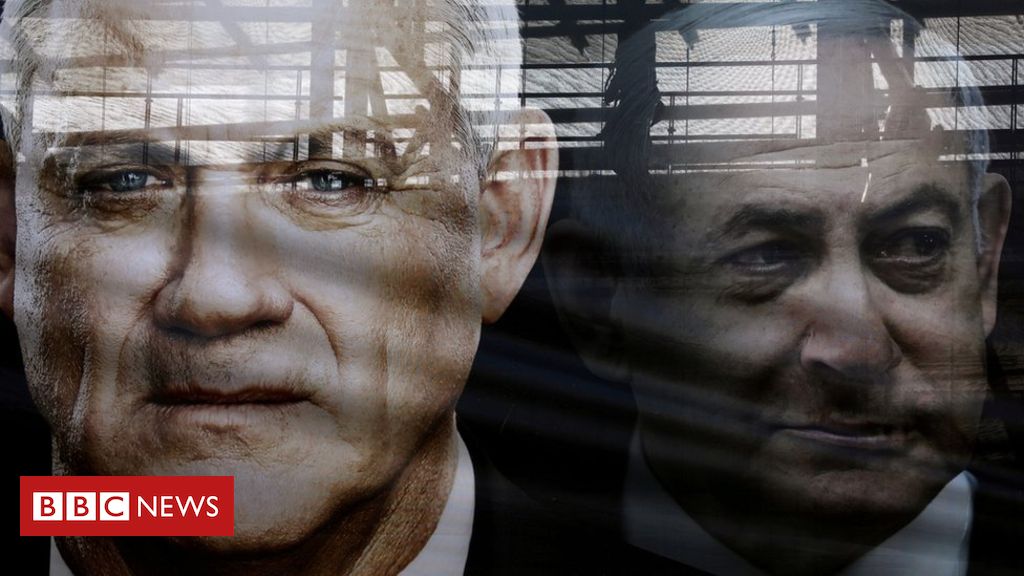 For Israel’s protector-in-chief, this was a victory forged in isolation.

Weeks on from the latest inconclusive election, Benjamin Netanyahu had to go into quarantine for some of the time he was trying to outmanoeuvre his rivals because his health minister – overseeing Israel’s coronavirus response – tested positive.

Then, in the heat of crisis, came another coronation for “King Bibi” (as some admirers call him); set up after Zoom video calls and signed off in his official residence with his country in near-total lockdown.

Another set of remarkable events in the Netanyahu story.

In the face of corruption claims, he has shredded the political alliance that rivalled him at three elections. He has turned his chief challenger Benny Gantz – for now – into his chief deputy.

Opponents became an image of still conformity – protesters were pictured each standing alone at a socially distanced demonstration in Tel Aviv.

And he has set a course to try to introduce a centrepiece of President Donald Trump’s so-called “Deal of the Century” – the annexation of parts of the occupied West Bank – a rallying cry for the Israeli nationalist right but set to inflame tensions with the Palestinians.

But despite it all, the pact he signed to govern with Mr Gantz is set to bring an end, on paper at least, to the Netanyahu era.

Israelis have been deeply divided over their longest-serving leader.

Throughout last year, Mr Gantz built an opposition movement on the basis of popular discontent with Mr Netanyahu.

In the strongholds of his Blue and White party, voters during three successive elections would tell me they saw the incumbent prime minister as self-serving and corrupt.

Mr Gantz, a former military chief, pulled together policies mostly of the right and liberal centre, tacking from one approach – trying to upend Mr Netanyahu’s platform as the guarantor of security – to another – highlighting the corruption cases and vowing never to sit with a prime minister under criminal indictment.

Now Mr Gantz has broken that pledge, justifying his move by saying there is a pressing need for stable government to tackle the coronavirus pandemic.

Mr Netanyahu’s supporters continued to eulogise his economic management and his image as “Mr Security” – “Only Bibi!” I heard shouted repeatedly on the campaign trial. Israel has a government, but it has not resolved its “identity crisis”, as one analyst describes it.

And the backdrop to the political crisis: this summer Mr Netanyahu faces a delayed trial for fraud, bribery and breach of trust – allegations he denies and sees as a witch-hunt to drive him from office.

After their meeting on Monday night, the two men said they had reached agreement to form a “national emergency government”.

Mr Netanyahu said the coalition deal would save “lives and livelihoods”.

In reality, this agreement has come late. Officials believe they are successfully managing the first coronavirus wave in Israel, but an economic emergency now looms, with almost a quarter of the workforce – more than a million people – unemployed.

The 14-page coalition document not only sets out the mechanism for the next three years of government, but also gives both men guarantees to stop the other grabbing the reins of power – effectively clauses of mutually assured destruction.

The deal amounts to a “democratic ceasefire”, according to the political analyst Yohanan Plesner, who heads the Israel Democracy Institute think tank.

He is among those who characterise Israel’s paralysis partly as a result of perceived attempts by Mr Netanyahu and his allies to use political office to swerve legal problems.

“Anti-democratic legislation is dead in the foreseeable future,” he says, citing Blue and White’s control of the justice ministry and a committee controlling legislation.

So what kind of government will it be?

For some commentators on the left, Mr Gantz’s control of much of the government marks a shift towards the centre ground, a meaningful change in Israeli politics that was characterised by religious nationalism, or “ultra-right” policies, according to the Haaretz journalist Chemi Shalev.

“The disproportionate influence hitherto exerted by the ultra-Orthodox parties and the settler lobby will be diminished,” he says.

Palestinian leaders and the Arab Israeli parties have castigated the clause in the agreement that suggests cabinet discussions could start from 1 July on applying Israeli sovereignty to Jewish settlements and other territory in the occupied West Bank.

The proposal reflects part of President Trump’s peace plan for the region, seen as heavily weighted towards Israel and rejected by the Palestinians.

Settlements are considered illegal under international law, although Israel disputes this.

“[It] means ending the two-state solution and the dismantling of the rights of the people of Palestine as established under international law and resolutions,” he said.

According to the deal, any specific annexation proposals would need American support.

A further caveat is the “preservation of existing agreements” – mainly those with Egypt and Jordan, says Mr Plesner, who thinks that the deal puts the issue on the agenda but does not make clear how it will transpire.

“Gantz can put on the brakes but not pull the handbrake altogether,” he says.

Meanwhile, some of Mr Gantz’s former allies accuse him of betrayal.

“It’s the worst act of fraud in the history of this country,” says Yair Lapid, a former co-leader of Blue and White. “I didn’t believe that they would steal your vote and give it to Netanyahu.”

Another MP who backed Mr Gantz to form a government previously accused him of becoming a “criminal’s doormat”.

Blue and White had run out of political road – unable to form a coalition of its own because it lacked the numbers in parliament or would have had to rely on the support of groups that would never sit together.

Israelis have been unable to decide three times on Mr Netanyahu’s fate. Now he has decided for them – for the time being, at least.